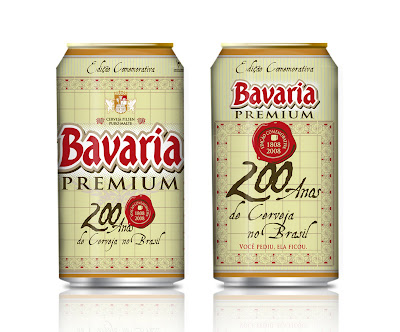 Thanks to Karen Rozenbaum of Rex Design for sending in the images and information of this special design edition of BAVARIA Brazilian beer. Rex design has grown to be one of the biggest design agencies in Brazil and being the most awarded in the history of the Biennial Graphical Design in the country.

One of the most traditional and beloved Brazilian beer brands, could not stay away from the Commemoration of the 200 years since the arrival of the Portuguese Royal family in Brazil.

To venerate the tradition of consuming Bavaria beer in the country which, it is believed, was very appreciated by D. Joao, REX Design developed an special design edition. The can creation reverence the Royal family, with calligraphy types and a commemorative stamp that remits to the Royal stamps.

“The idea of the new packaging design has evolve to a campaign at sales point, in which we developed all promotional material, with thematic materials inspired in the Portuguese’ traditional glazed tiles, specially designed by REX”.

The campaign celebrating the 200 years of Bavaria’s beer in Brazil was a success and the proof of that was the development of a second edition of Bavaria’s can, carelly named as “Latinha do Fico” (“The Stay can”). For this version, REX Design created an specific text,interacting with Bavaria’s beer consumers: “You ask, she stay”. 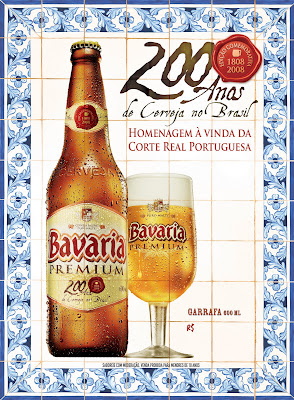