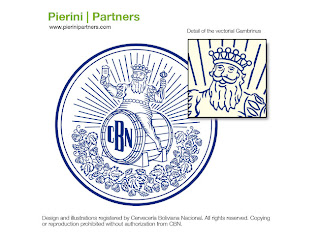 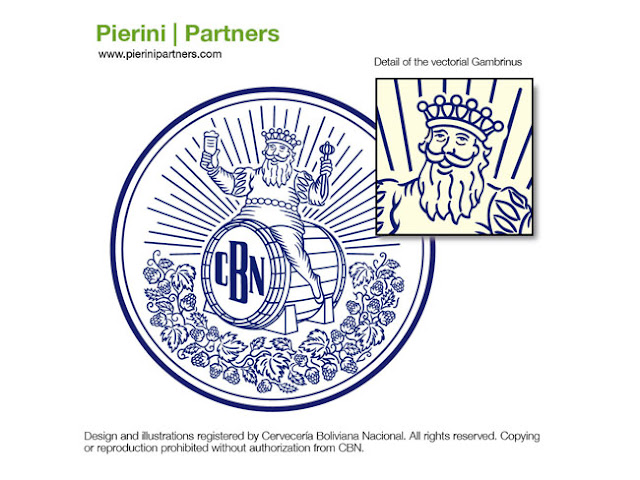 Pierini Partners redesigned one of the most important CBN icons

In this article, Adrián Pierini, designer and CEO of this prestigious Argentinean agency, tells us about the process that led to the new image of an emblematic icon of the most important beer company in Bolivia.

How can we alter a company’s tradition? How can we modify an image that synthesizes one of the most well-known icons for the Bolivian people? The analysis, talent, creativity and, above all, the respect for the existing values were basic requirements when we started such a challenge.
Adrián Pierini has done several branding developments for leader products of the mass market, not only national but international too. So, as soon as he started this project, he understood that it would be more transcendental than just a simple aesthetic change.
In this occasion, it would not be a product that would be changed, but the core of a brand, which has emotional connotation.
For the Bolivian, CBN is something to be proud of. It is a hundred-year-old company that has gained respect and admiration in all the territory. 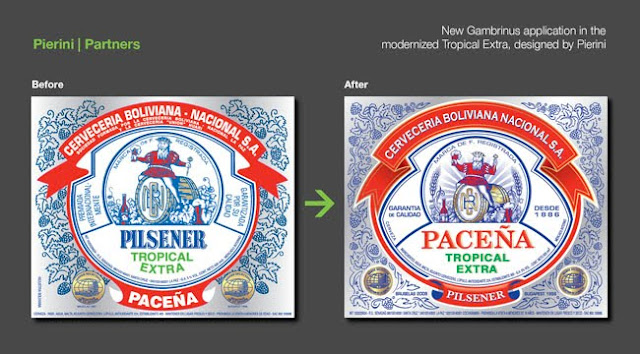 CBN: a hundred-year-old Bolivian company, deeply-rooted in its people’s heart

CBN was originated at the beginning of the twentieth Century and since then, it has strengthened its image through work and improvement. Entire generations have walked its corridors; have helped in its growth, and are testimonies of life stories.
It has plants in La Paz, Santa Cruz, Cochabamba and Oruro, and it is “THE” Bolivian beer company. It produces several well-known brands: Paceña, Huari, Bock, Bicervecina, and Maltin among others. The quality of the raw materials and the careful elaboration process has made its beers memorable for everyone who has been in Bolivia. Conscious of this, one can understand how sensible people may be to any modification in something they love and admire. 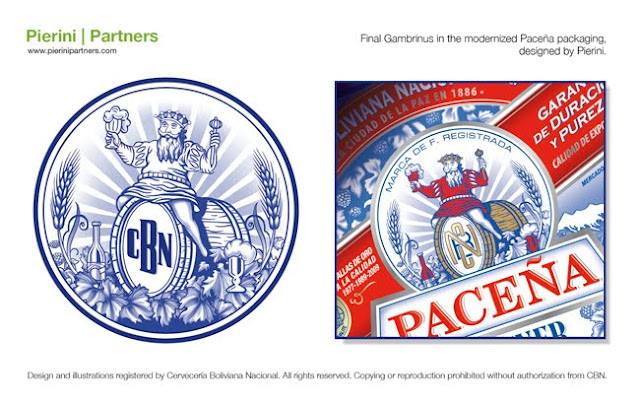 Optimizing a functional system
CBN knows that success is sustained with organized commercial politics, and that is why its marketing team decided to start a process of general actualization, with the intention of generating a more unified and competitive visual system. This challenge would involve its packagings, and the popular icon that symbolizes the company: the Gambrinus. 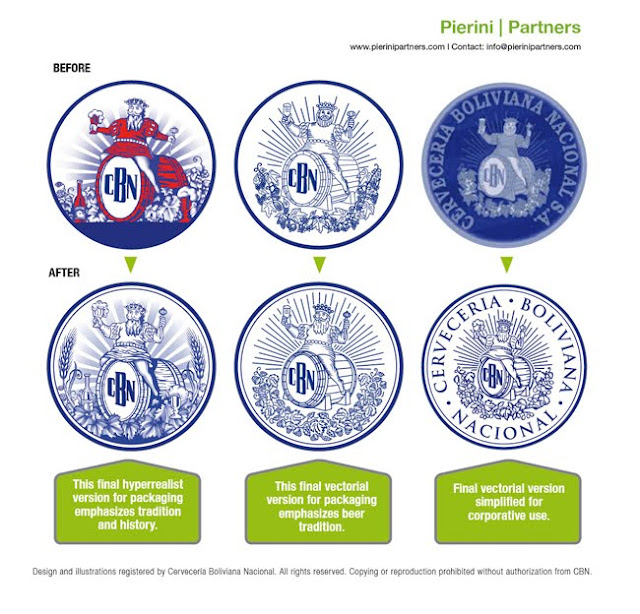 The Gambrinus, an icon in CBN

It is uncertain when he first appeared, or when his long beard, his fat and chubby body and his festive face have won people’s heart. The truth is that, currently, the Gambrinus is a symbol of joy and abundance. In Pierini Partners, we decided to start working with this icon modernizing it, as it represents many of the products, and plays an important role in their aesthetic. This “abundance God” should be modernized, but its essence should remain the same; that was the big challenge.

Ok, we should refresh this figure but… where should we start? How much should be modify without changing its history, its collective imaginary? Having this dilemma, we started analyzing this icon’s profile. Bolivian loved him the way it was but… would a change in its attitude, a more upright position, a more formal expression, attack or add to its values? This doubt was one the first questions we needed to answer. We tried with different options, exploring new features and personalities.
The first sketches “dressed” him with honor, glory and tradition. Then, we create different faces with different beards, expressions, etc. However, we finally discovered that the Gambrinus was warm rather than ceremonial. Seeing its environment was enough to reaffirm this idea. CBN has his image in its plants, labels, offices; the emotional bond was very notorious. After exchanging opinions with the marketing team, we all decided to maintain his friendly and warm personality. Having defined the values, we faced the project problem. The representation, which has been the same for years, was more linked to illustration rather than to the synthesis used in the market language. This was a complex inconvenient, especially thinking in the many different applications and the reproduction problems.

One or two Gambrinus?

To add more complications, we needed to consider that this lovely character had two functions: identifying and decorative. He plays a role for the brand, and also he is present in the most emblematic packagings of the CBN. It was fundamental, then, to decide whether to use one figure or to create different ones according to its later application.

When we started the project, the Gambrinus had two versions and two positions (with his arms up or down/ hyperrealism and vectorial treatment). Actually, the difficulty was not only in creating a sole icon, but in creating an established image which could not be given in to the whims of printers or designers.
The marketing team showed itself totally convinced that the icon had to transmit a clear and direct message, without confusing speeches. All the effort was made to create one attitude, the one which represents CBN.

The body position as the attitude representation, adding subtleties

There are new ideas about design that hold the total destruction of the preexisting to create a new way of representation. Out with the old, in with the new!! This philosophy is unreal and dangerous. To ignore the tradition, the culture, or the consumer’s visual history is equal to depersonalize the message, to create a “cold” communication code, and with no conquer personality. No, CBN was not looking for that, and made the right choice; to modernize the Gambrinus, but to maintain all the positive qualities consumers find in him.

After having analyzed the local market, its consumption habits, and evaluated the different implementations for the Gambrinus (packaging, posters, signings, glasses, flags, trucks, uniforms, etc, etc), it was decided that only one representation technique was not enough. Taking into account its affective value, we could not do without the illustrated version (which has been so proudly exhibited in the labels since its origins). And it was a contradiction to consider a more modern corporative image, if the basis was such a traditionally illustrated image. Considering all this, we kept thinking that two representation styles (one of them gestual and the other one synthetic) was the right thing to do, and that we should pay especial attention to the Gambrinus’s attitude in both representations.

Apart from the technique used in the drawing, there were evident formal differences between the vectorial character and the hyper-realistic one. To correct those differences was, in our opinion, an obliged step to make to reach unification in the general system.

That was why we initiated and structural and unifying process to obtain the same gesture, the same attitude. The result: a classic image, with a friendly expression, and with his arms up, inviting us to enjoy with all our senses.

As I have mentioned before, we had to make two versions; one for corporative application (more synthetic and vectorial) and another one for the packaging (an illustrated and more detailed version). For the first one, we erased all the superfluous, the lines in the glare, the leaves became simpler, and the face features, the keg details and the clothing were drawn with simple and clear lines. For the second one, we respected the existing illustration style; we defined the outlines, we soften the different color shades, and we increase the leaves volume. This version was enriched with two spikes around the figure (this addition was really important to reinforce the idea of a beer, moving it away from its winy reminiscence). We also polished and simplified the previous monogram, in the frontal part of the keg, in order to optimize its reproduction capacity in small scale.

The final result was very positive. There is formal coherence between the icons, and specified uses for the two versions. But there was an aspect of the project which had not been defined; we still have to decide which typography would complement the corporative use.

We should show evolution but in a classic language. After showing many options and exchanging opinions, we decided to use Roman characters. Neither pretentious, nor shocking or leaders, they have a traditional profile. We chose Goudy, in its bold and regular form, and we incorporated it to the institutional identity in a circular way, around the icon.

A functional whole, respectful of its origin

To work with shapes and messages conceived centuries ago was not a simple task. To INNOVATE is not to IGNORE; this rule regulated our work the whole time.
This visual and functional improvement, which implies over a year of work and in which illustrators, designers, and the marketing team were involved, made an important step to a new visual stage in CBN. To us, that is a huge success.