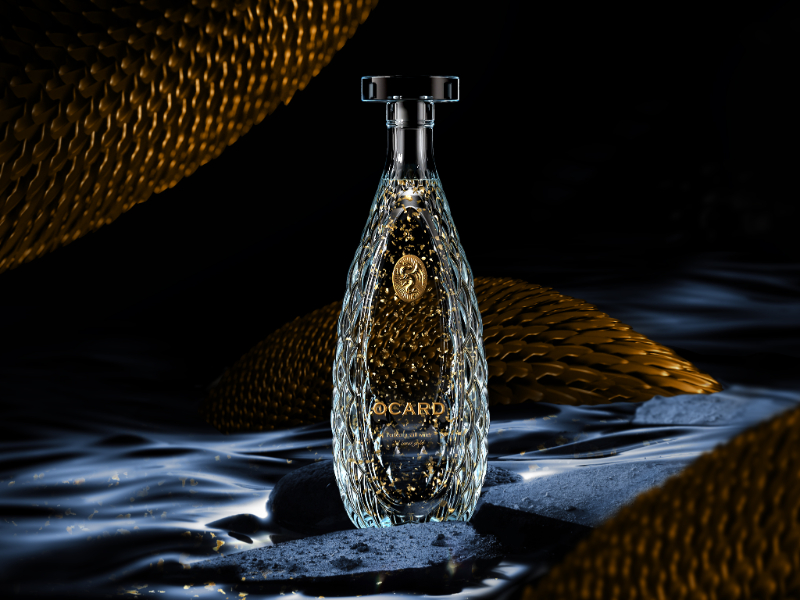 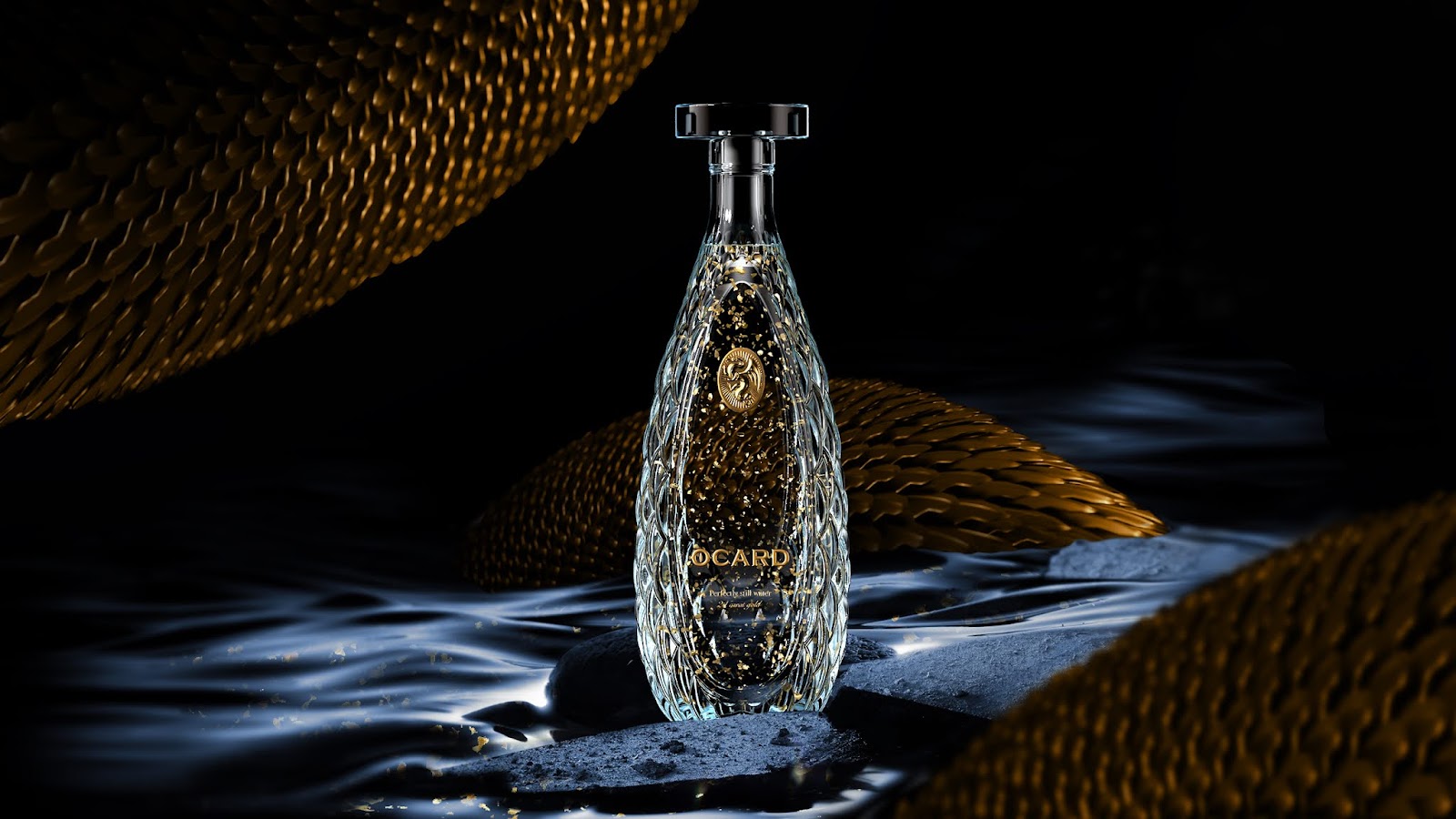 In Uzbekistan most people don’t drink alcohol. So they can’t give a good bottle of whiskey or wine when it comes to presents and congratulations. But they can present a bottle of water with gold instead. Presents come together with wishing happiness and a long life, which is the most desired wish in Uzbekistan.

The objective was to create a brand name and packaging design for water with gold to be a meaningful and premium present. Presents come together with wishing happiness and a long life.

In Uzbekistan there’s a legend about the underground spring guarded by a golden dragon. Its water contains flakes of gold and the one who drinks it obtains eternal youth. We took this legend as a brand story for premium water with gold. We named the brand Ocard which is a reversed Draco. We created a unique glass bottle covered with «the dragon scales». And there’s almost nothing on it: just the logo with the dragon eye in the «o» and the medallion with the dragon.

The legend
Many moons ago, in an age when rivers flowed to the north and the sun rose in the west, Faradur was ruled by a golden dragon. The dragon was a wise ruler who brought peace and prosperity to the all the lands enveloped in the shade of his majestic wings. Drawing his life force from the depths of the mountains, the dragon’s scales turned gold due to the wonderous minerals that nourished him. When the occasion merited, the dragon would reward the most-deserving people of his kingdom with one of his golden scales. According to ancient legends, water that passed through one of the dragon’s scales is bestowed with an inexhaustible supply of vitality, bringing those who imbibe it closer to eternity.

This legend was passed down from the mouths of elders for millennia, yet what became of the Dragon and his kingdom has been sadly lost to the vestiges of time. We are left with only a vague description of the place that lay at its heart: today this area is known as the Hessarian Range, a place where the power of the golden dragon lives on. For many generations, people have been striving to recreate this power, like alchemists mixing scores of ingredients.

Finally, the ideal recipe was found and embodied in the Ocard Brand: if you mix water from the Hessarian waterfall with flakes of gold mined from the depths of the local mountains, one achieves a unique beverage that, just like in ancient times, brings its owner closer to eternity.

The quasi-magical name is derived from the word “draco”, meaning dragon. The reflective effect serves to emphasize the purity and unique quality of the water, mirroring the belly of the dragon as it flies overhead. 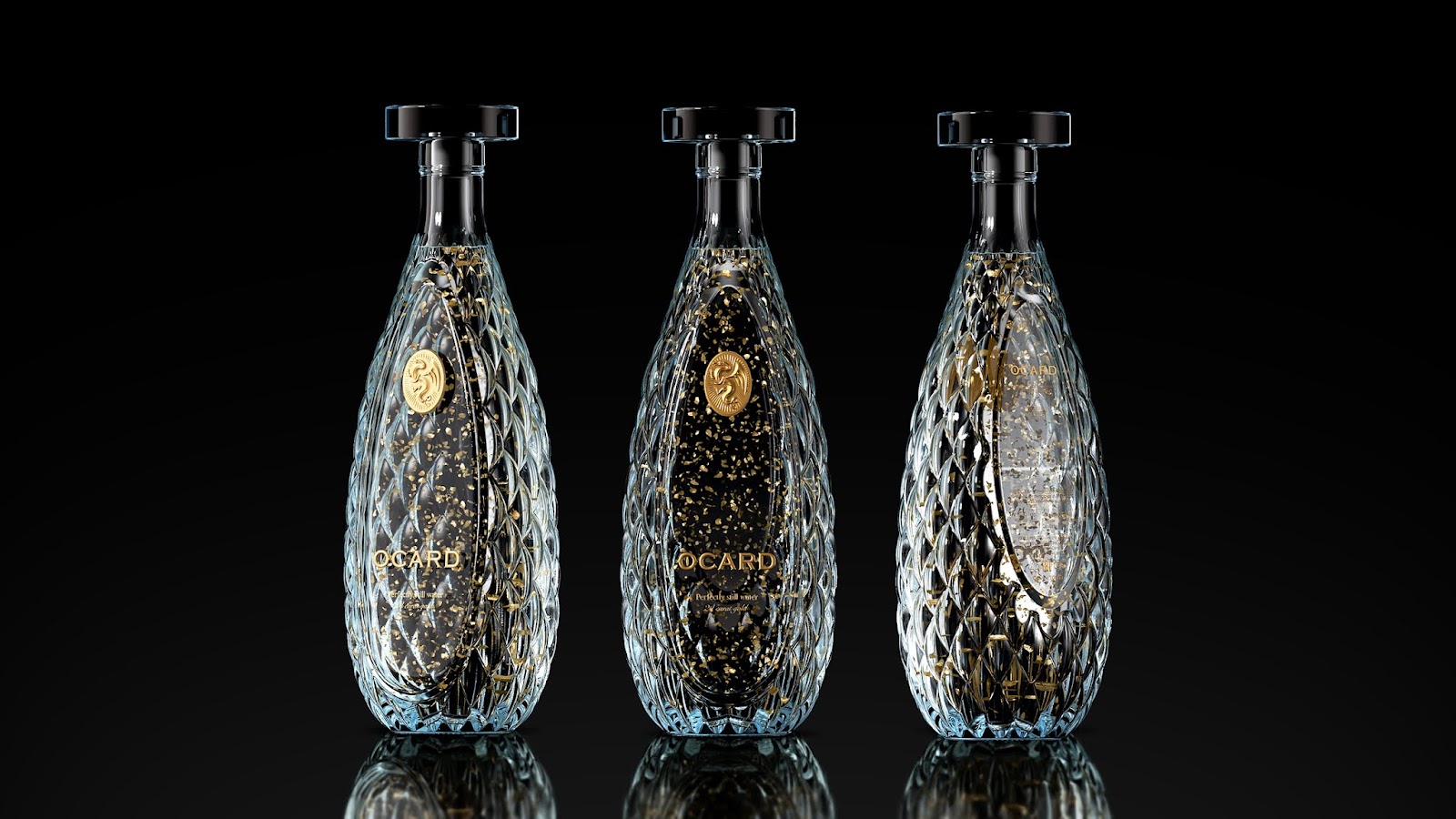 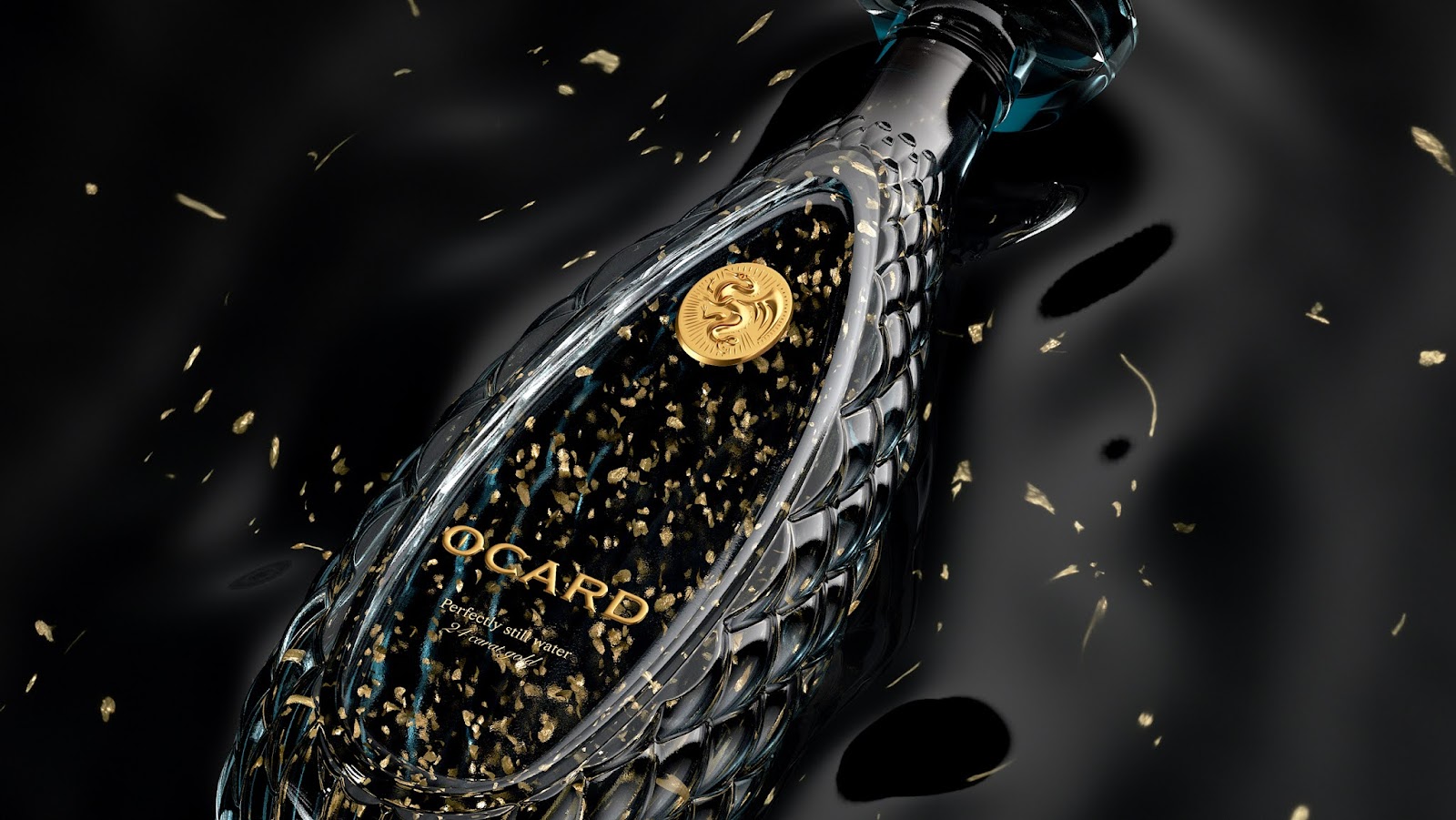 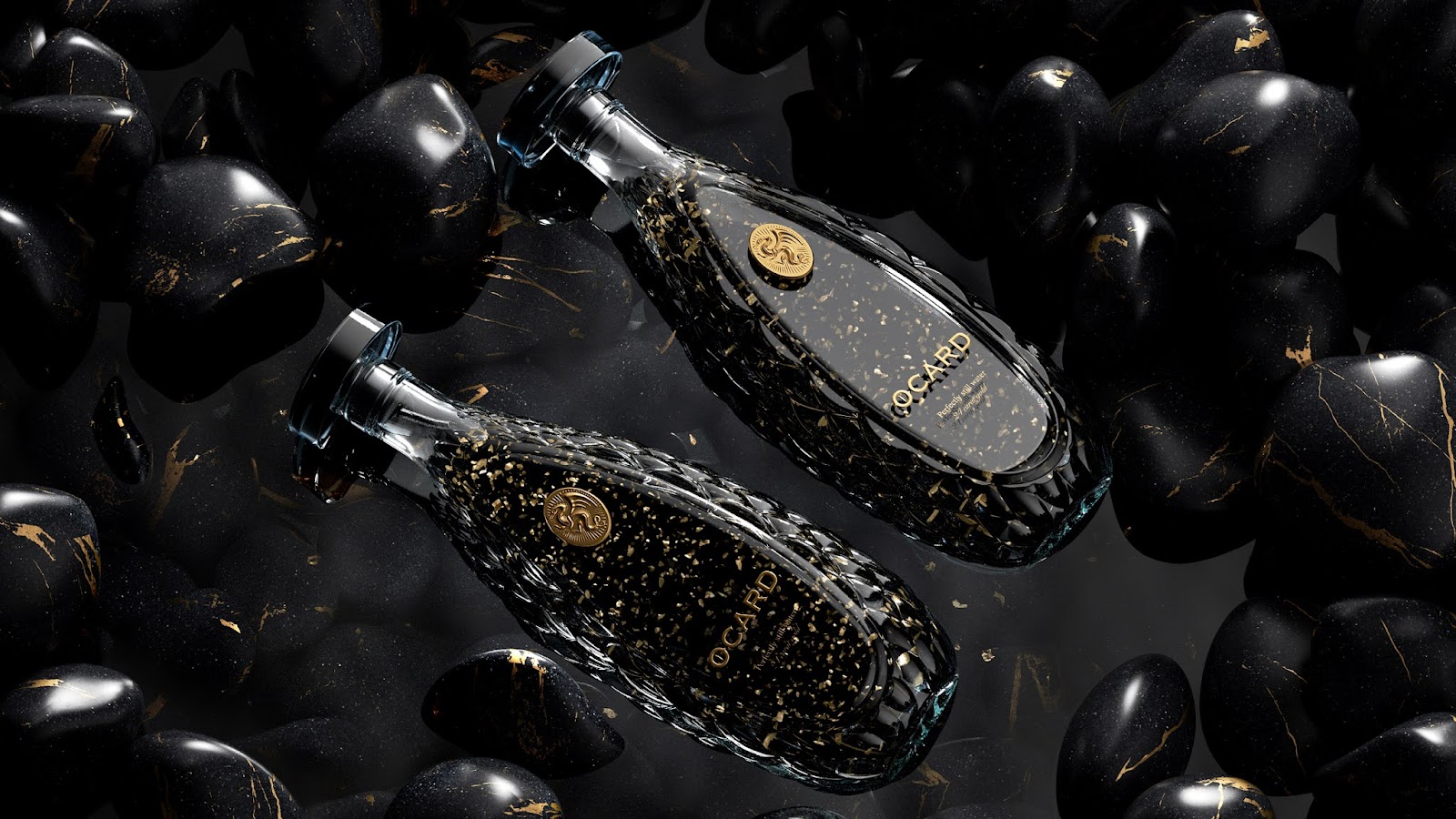 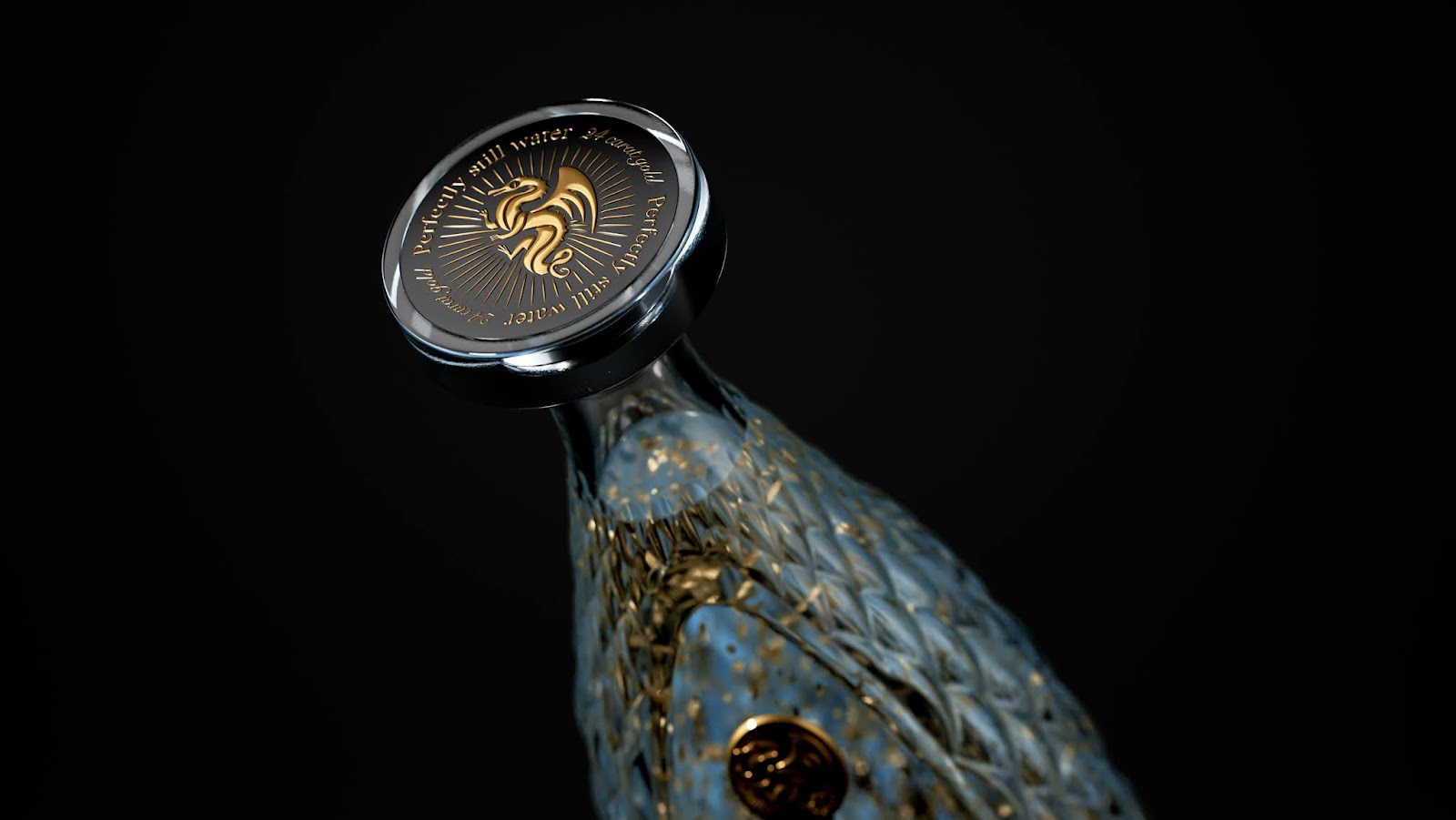