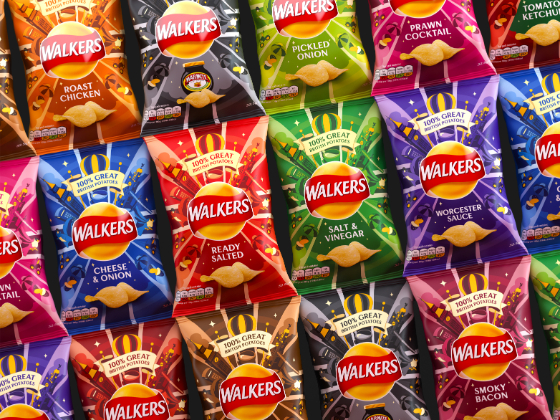 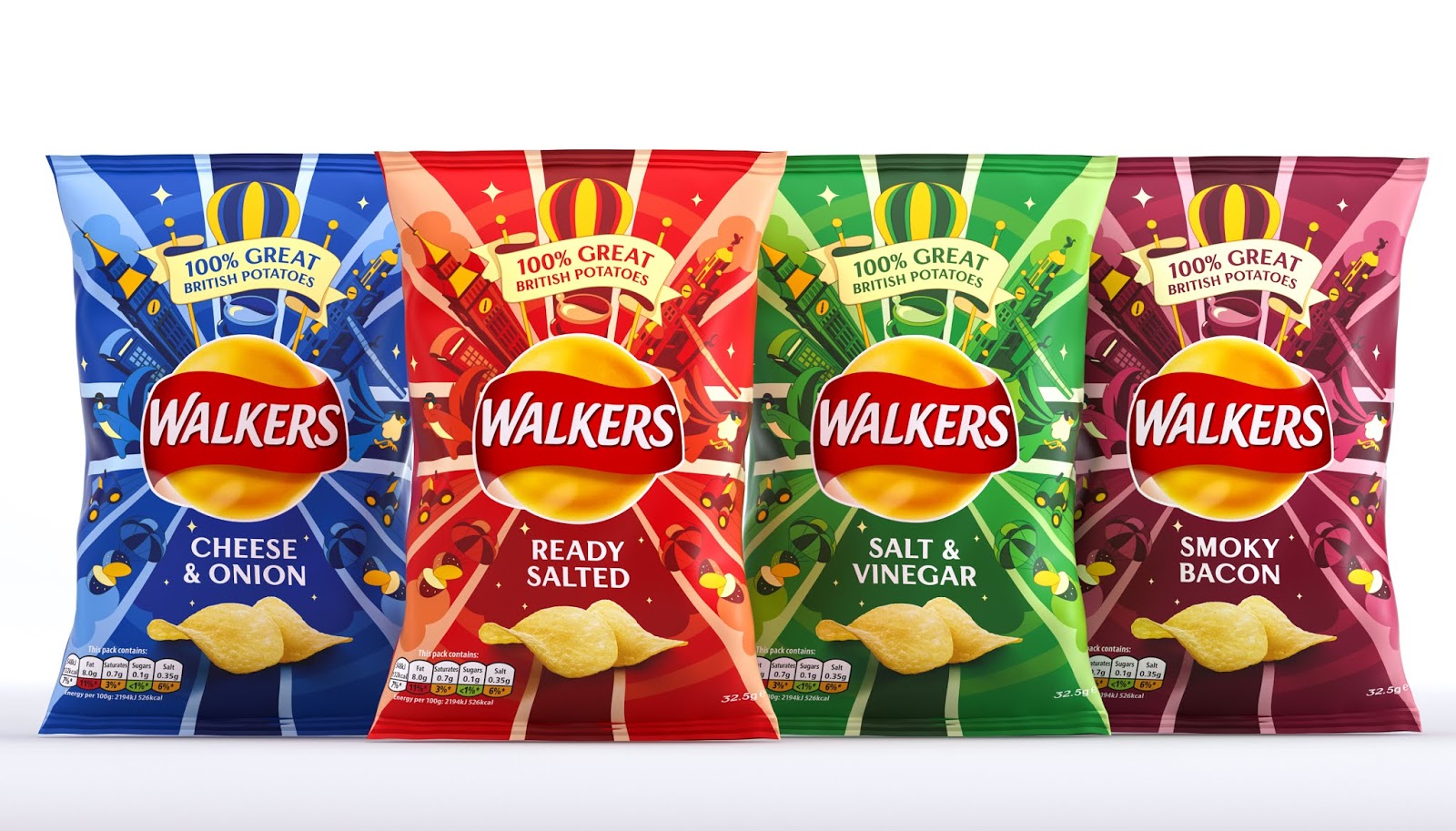 PepsiCo’s Design & Innovation Team today unveils a new look for Walkers core crisp range, designed in partnership with Vault49. The rebrand helps the packs stand out on shelf and strengthens the brand’s emotional connection with consumers.

The fresh new design underlines the rich brand story behind the nation’s favourite crisps, while giving the packs a modern, premium feel.

The Walkers logo has been moved to sit proudly in the middle of pack, marking the point from which playful hand-crafted illustrations of British icons burst out. Liverpool’s Liver Building, Big Ben, the famous red telephone box and a pigeon wearing John Lennon-style sunglasses explode from the logo in a subtle Union Jack shape, giving the consumer something to discover as they explore the pack.

Illustrations of tractors in a field reinforce the provenance of Walkers crisps, which are made with only British-grown potatoes.

The new packs, which are being introduced across the UK now, also feature a mix of gloss and matt finishes, emphasizing the premium nature of the crisps and helping the design to pop on the shelf. 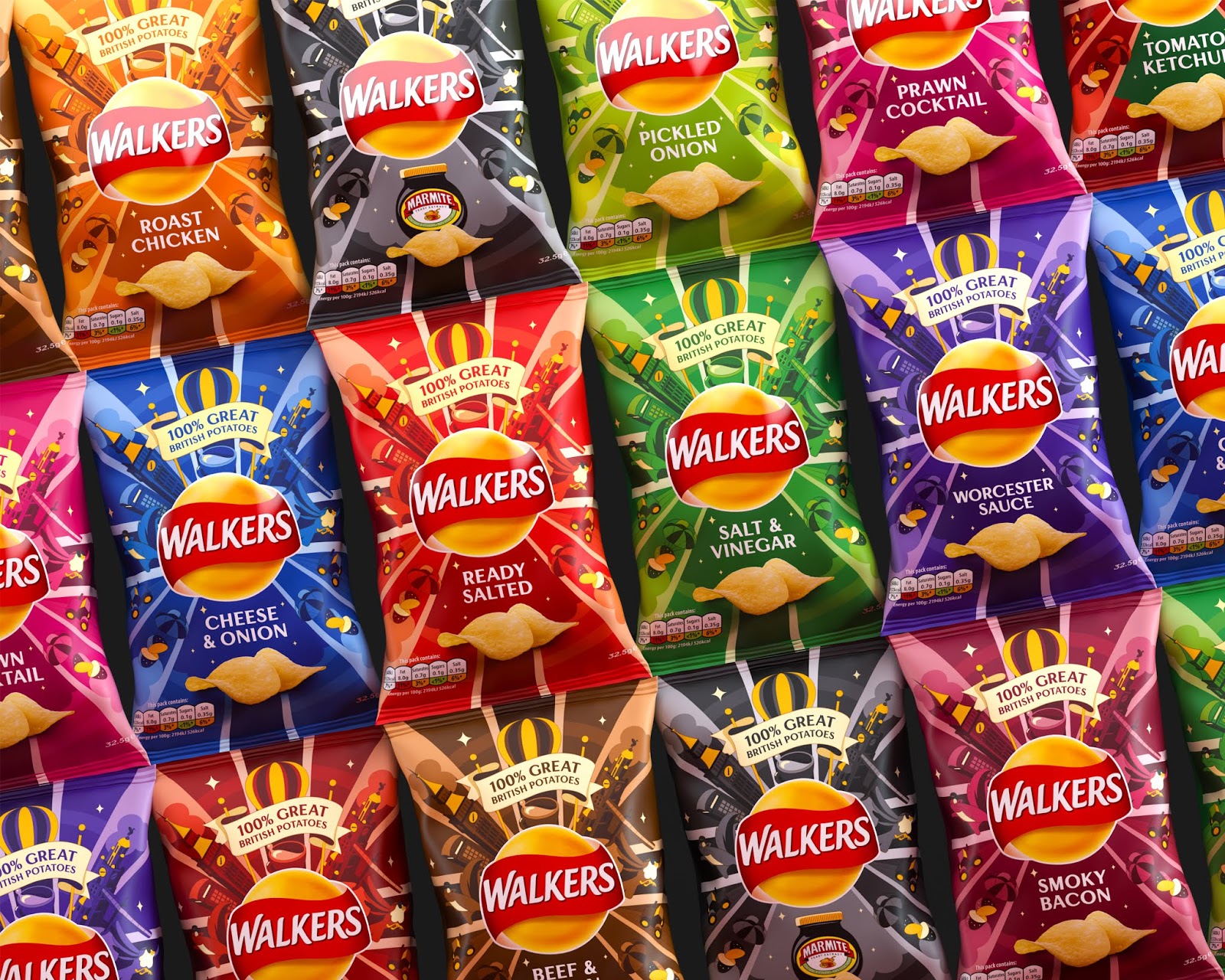 Jonathan Kenyon, Co-Founder and Executive Creative Director, Vault49, says: “Walkers makes seven million packs of crisps every day and sells more than five times as many in the UK as its nearest rival. It’s one of those rare brands that taps into something deeper than the feelings people usually have for companies.

“We feel honoured to have been asked to work with PepsiCo Design & Innovation to keep Walkers in this enviable market position. We’ve had great fun bringing the element of storytelling to life, creating a design that Britain can be proud of and excited to buy, but without losing sight of the importance of communicating the heritage and quality of such an iconic brand.”

David Marchant, Head of Design, Western Europe, PepsiCo Design & Innovation, says: “Walkers crisps are an irresistible delight, we’re excited to be unveiling a fresh and modern design that reflects the character of this uniquely British favourite. The eye-catching new pack will deepen the already-special relationship Walkers has with a nation of crisp connoisseurs.”