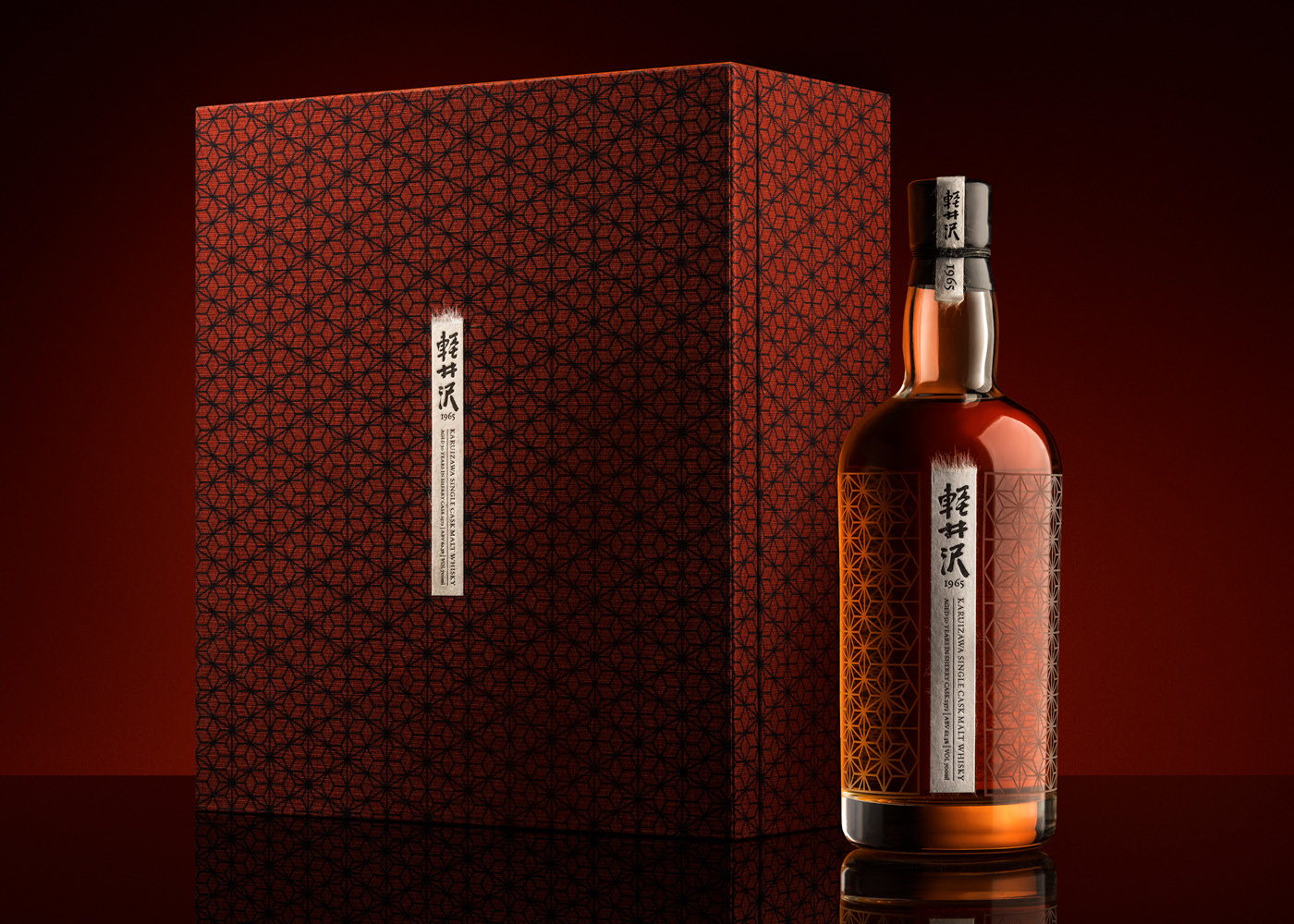 When Karuizawa – Japan’s smallest distillery – closed in 2000, what remained were 364 casks of rare whisky. In 2006, the precious liquid began to be released and what followed was a series of whisky awards, a cult following for Karuizawa and a dramatic increase in the prestige and value of Japanese whisky.

Monyou means pattern in Japanese, and so this collection is heavily influenced by the world of art. We began our creative interpretation by creating two different but complementary patterns – one for each whisky. Inspired by traditional woodblock printing, one of the patterns, for the Bourbon begins densely compact and opens out to wider pattern, while the Sherry cask begins more open and becomes progressively more dense. 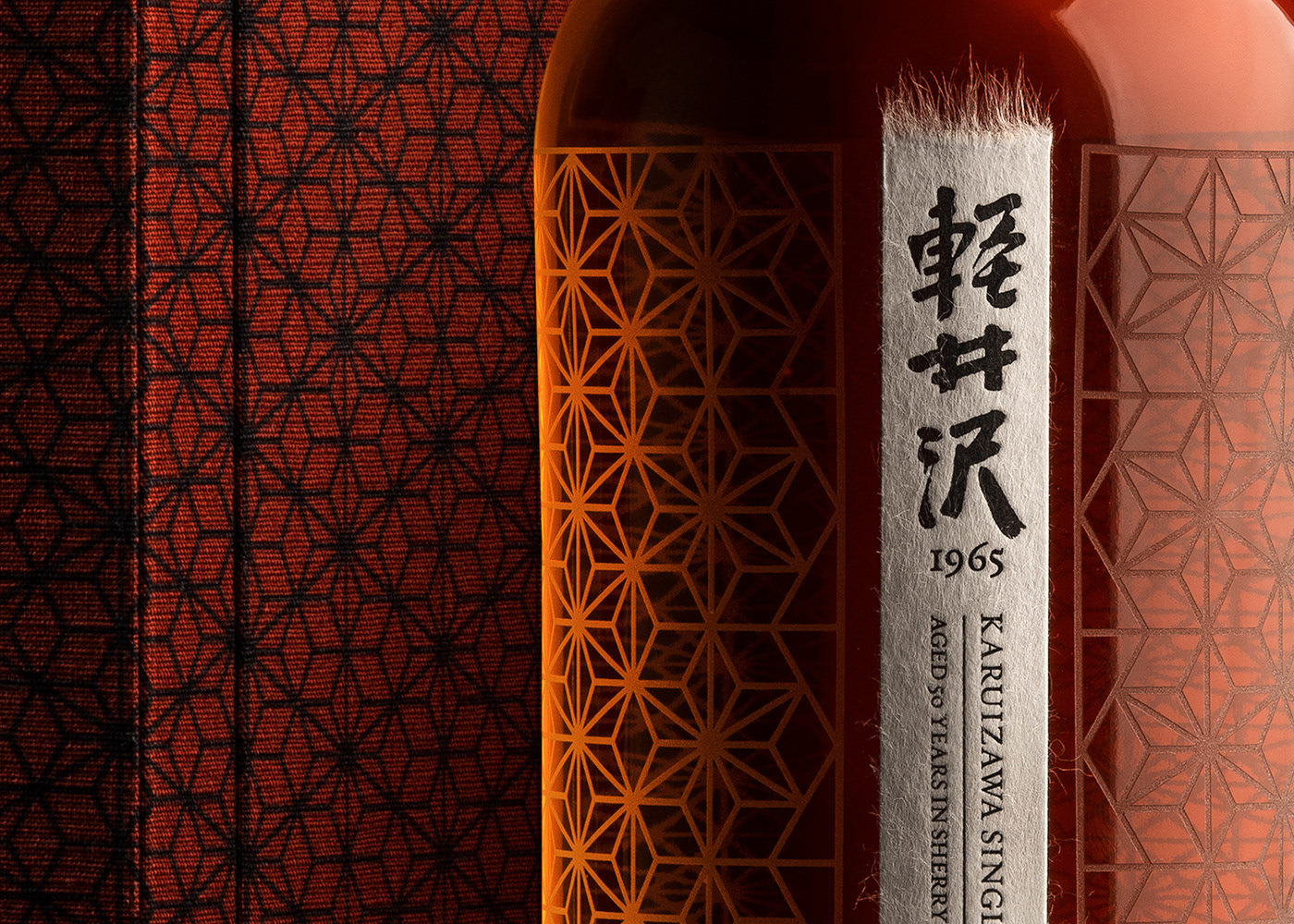 These beautiful and heavily detailed patterns were then etched into the glass of the double-weight bottles. This exquisite finish is indicative of the attention-to-detail that’s renowned in Japanese culture.

The label design is letter-pressed onto Japanese paper, hand made in Japan complete with intricate deckle edging at the top. The bottle is also wax sealed, bound and carries a letter-pressed neck tag that carries the name of the range.

The pattern on each of the individually numbered bottles carries over onto the bespoke printed fabric that adorns the box that holds each pack – dark grey for the bourbon cask and deep burgundy for the sherry cask. 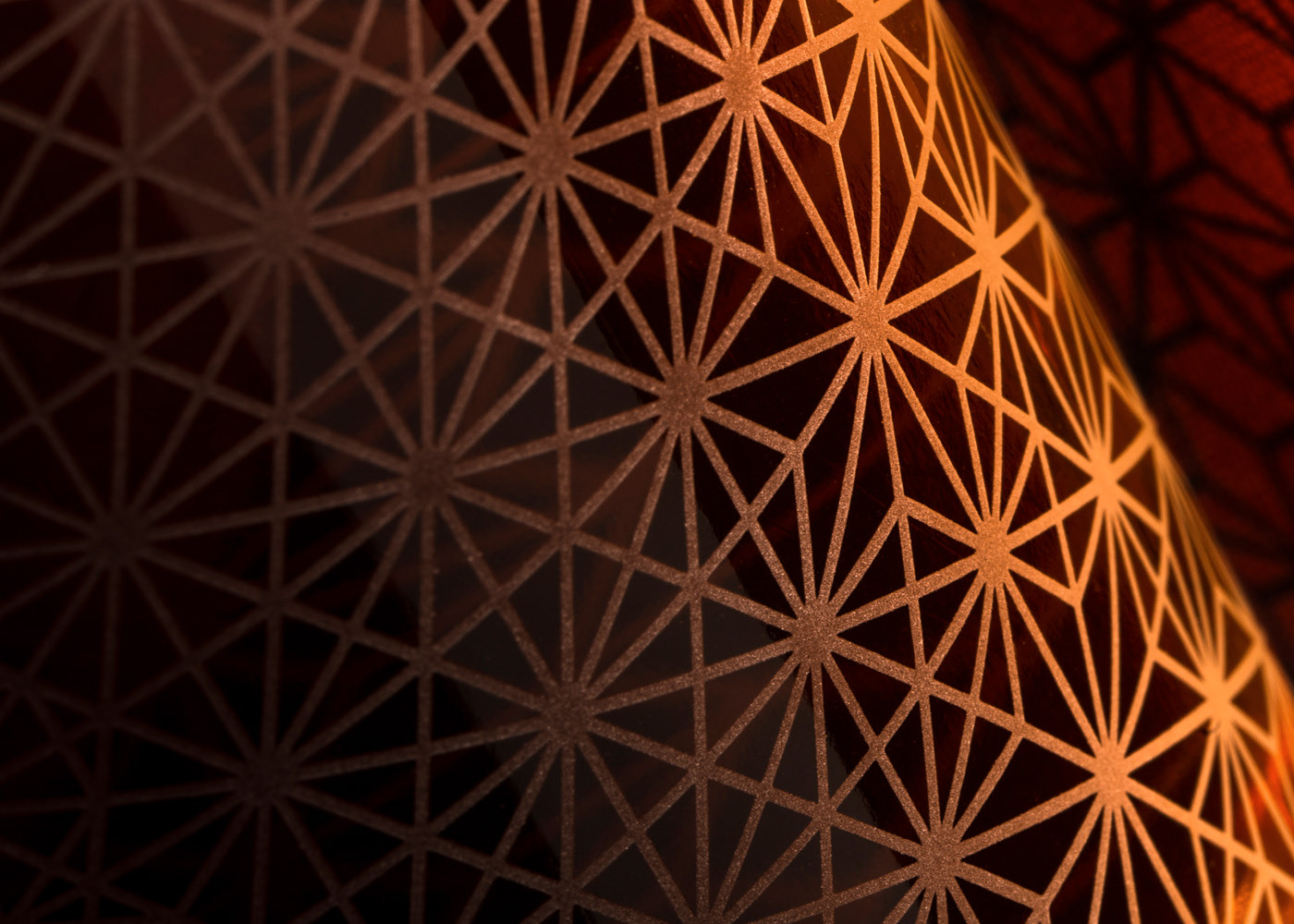 Inside the box, each pack, of course, contains the bottle of whisky but it also contains a collection of elements designed to make each pack truly unique. A small book, containing information about the Karuizawa distillery and its whisky as well as tasting notes for the whisky in each pack, has an extra page for the owner to complete. 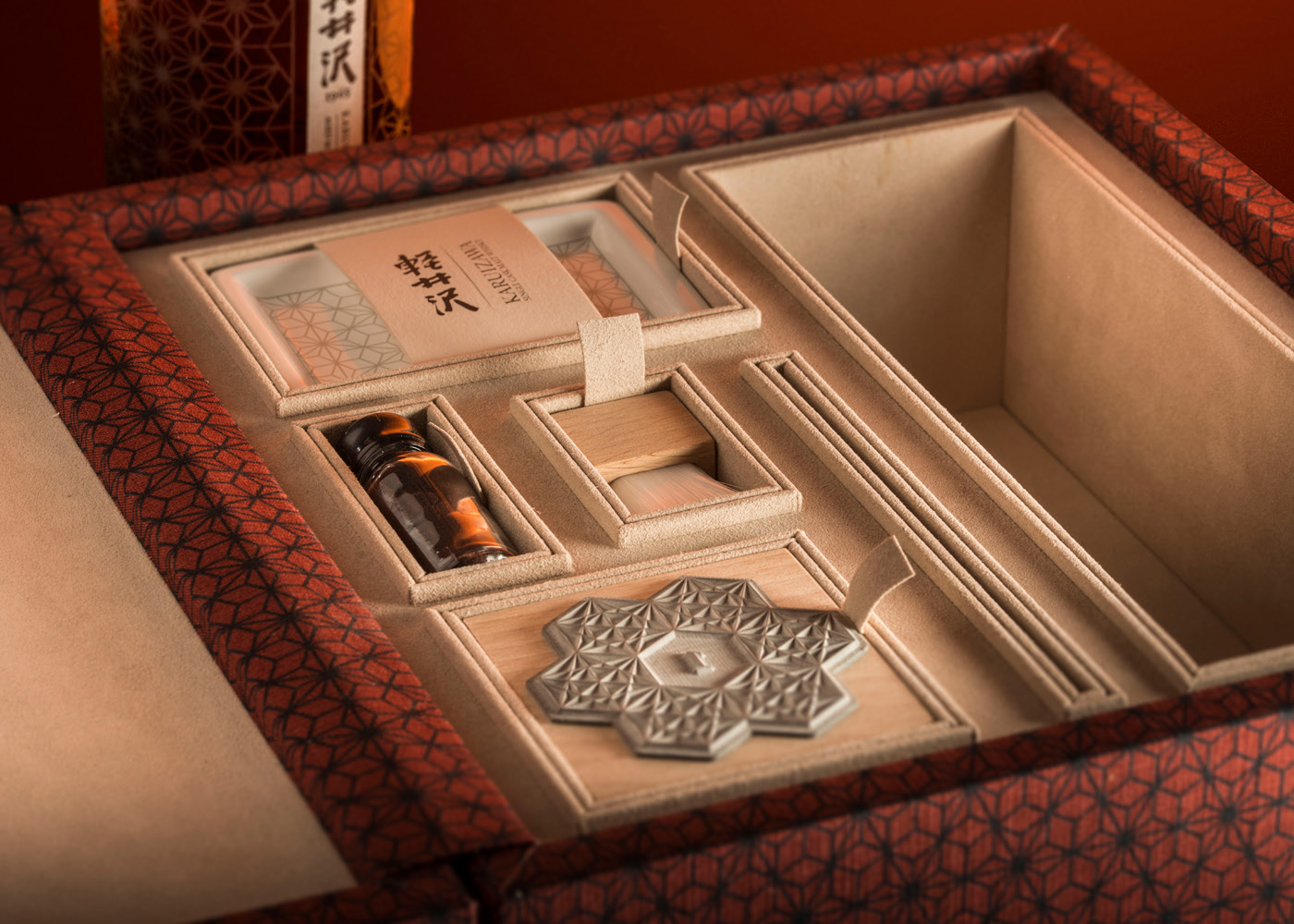 We included in the pack an individually numbered stamp, powdered ink, brush and bespoke porcelain dish – carrying the same pattern as the bottle – allowing the owner to imprint a final, completely individual impression. By stamping their pack in this way, the owner simulates the ancient technique of wood block printing and leaves their own unique mark on what is already a highly exclusive product. 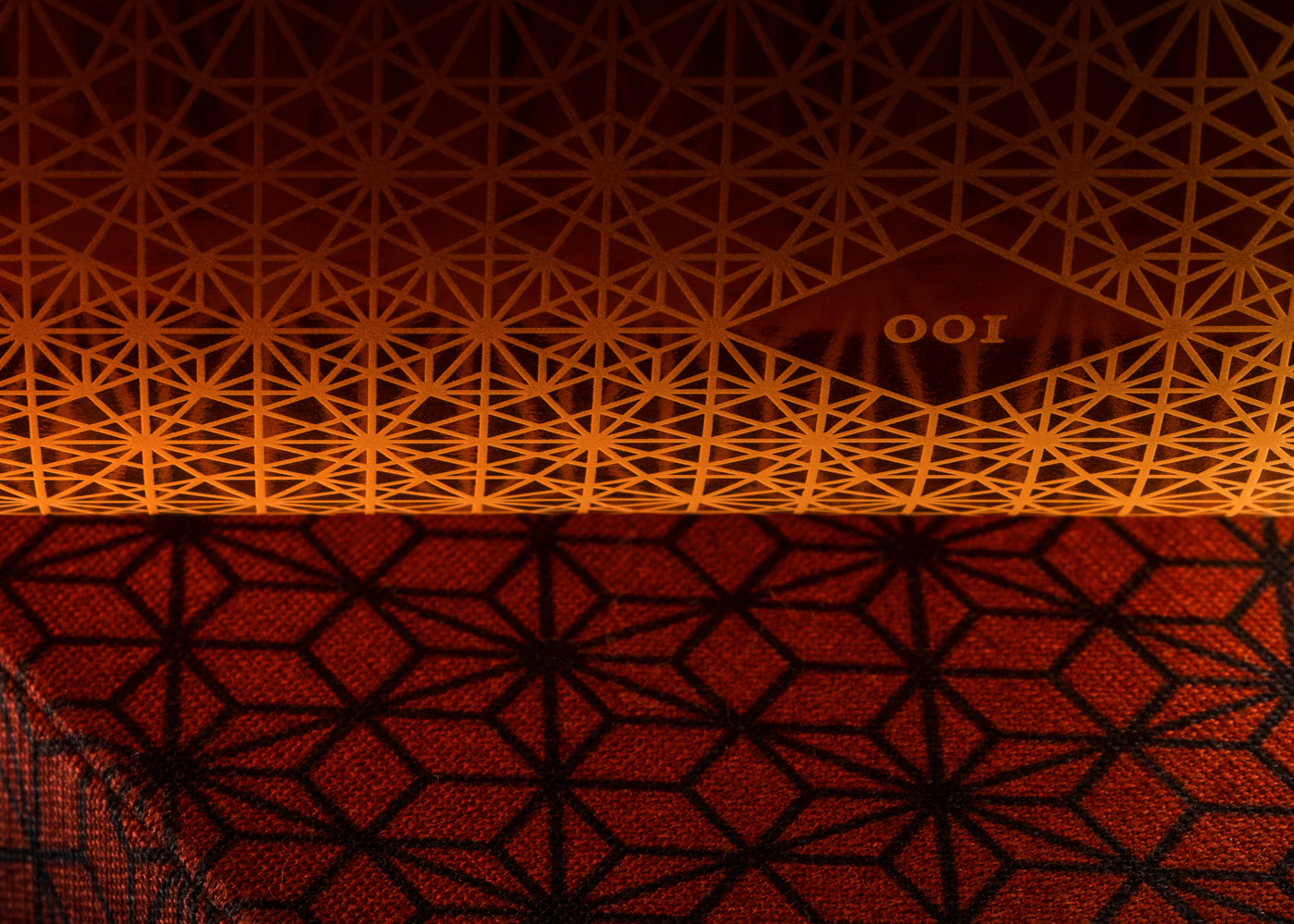