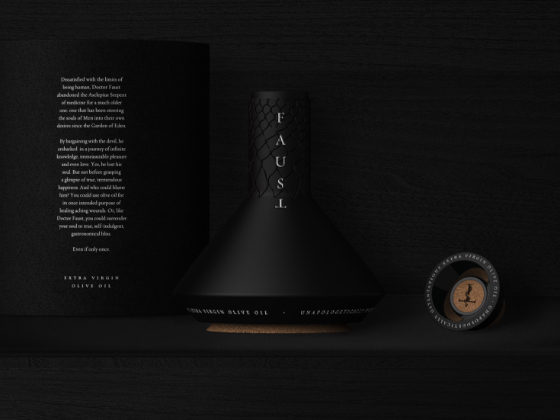 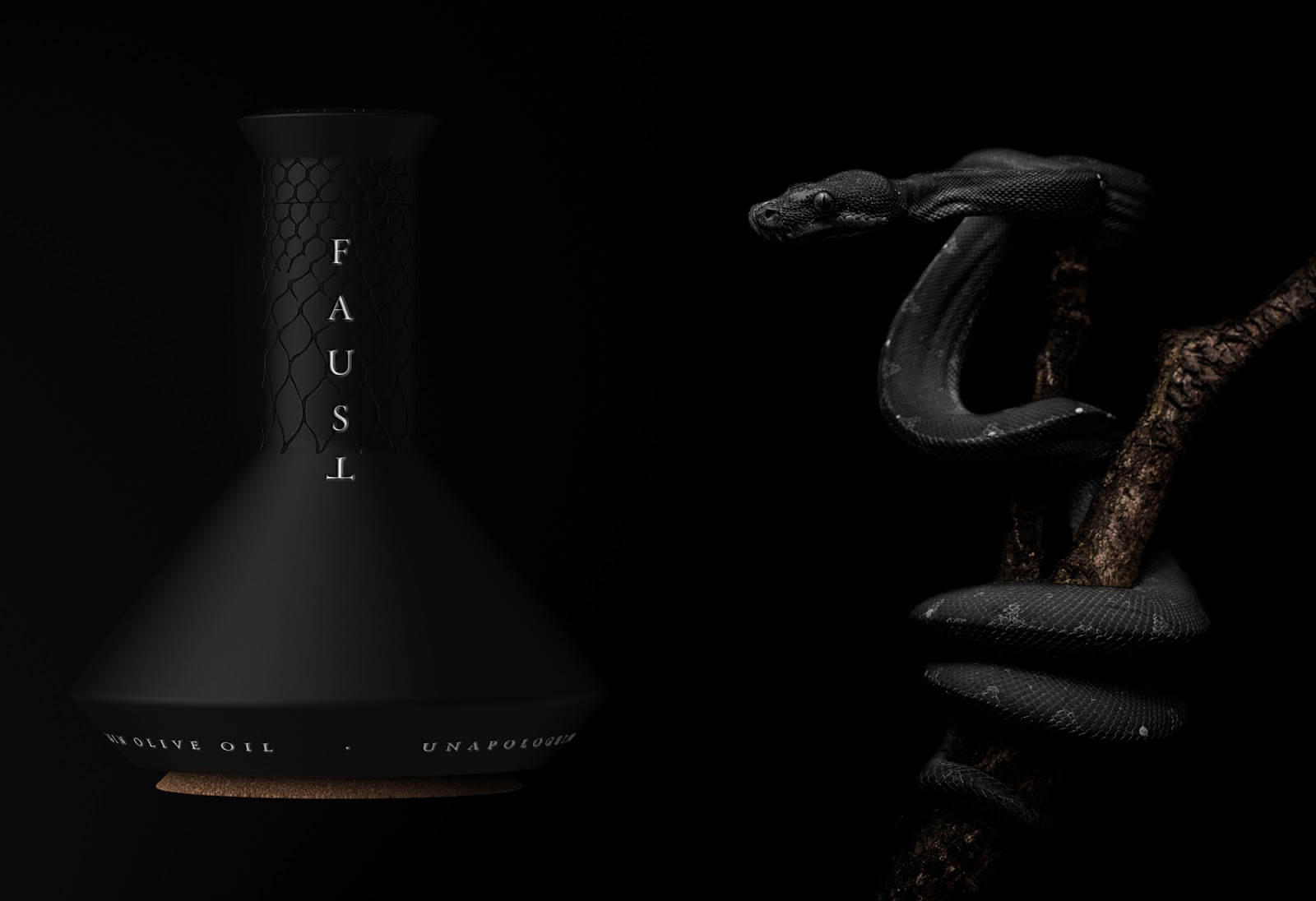 Dissatisfied with the limits of being human, Doctor Faust abandoned the Asclepius Serpent of medicine for a much older one: one that has been steering the souls of Men into their own desires since the Garden of Eden. By bargaining with the devil, he embarked in a journey of infinite knowledge, immeasurable pleasure and even love. Yes, he lost his soul. But not before grasping a glimpse of true, tremendous happiness. And who could blame him?

You could use olive oil for its once intended purpose of healing aching wounds. Or, like Doctor Faust, you could surrender your soul to true, self-indulgent, gastronomical bliss.
Even if only once.

This is the philosophy behind Faust, an unapologetically ostentatious olive Oil, created with pleasure in mind. 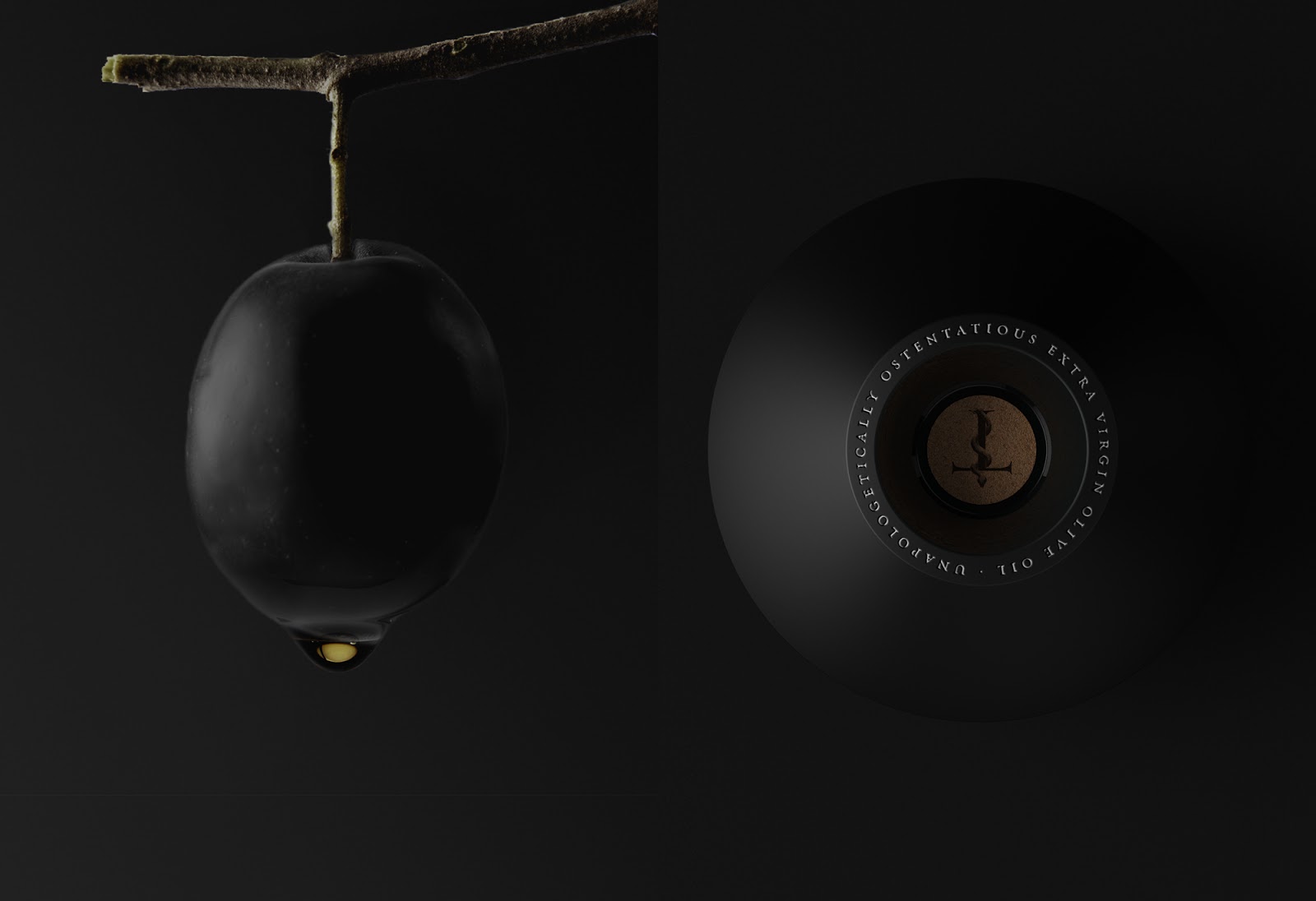 In the lettering, the inverted T represents Faust’s fall into damnation, reminiscent of the satanist inverted cross. For the icon, we took the Asclepius Rod itself. A corrupted version of it. By substituting the rod for Faust’s inverted T as the centrepiece (represented by his name), the icon sheds its role as the symbol of medicine and becomes a metaphor of a man enveloped — and enslaved — by his own desires. The serpent, drawn in a quasi-medieval style, is much closer to the evil snake of biblical tales than the neutral icon usually associated with Asclepius.

In the packaging, a texture in the neck extends the snakes embrace to the Erlenmeyer-flask-shaped bottle — itself, like Faust, a culprit of the betrayal of its medicinal origins for mundane pleasure. Coated with a rough matt finishing, its warm, haptic appearance is misleading, as its aluminium body underneath lends it a cold metallic touch — devil-like, one could say. Furthering this contrast is the use in some details of cork: an old, traditional material, not unfamiliar with the more lavish uses of other beverages. 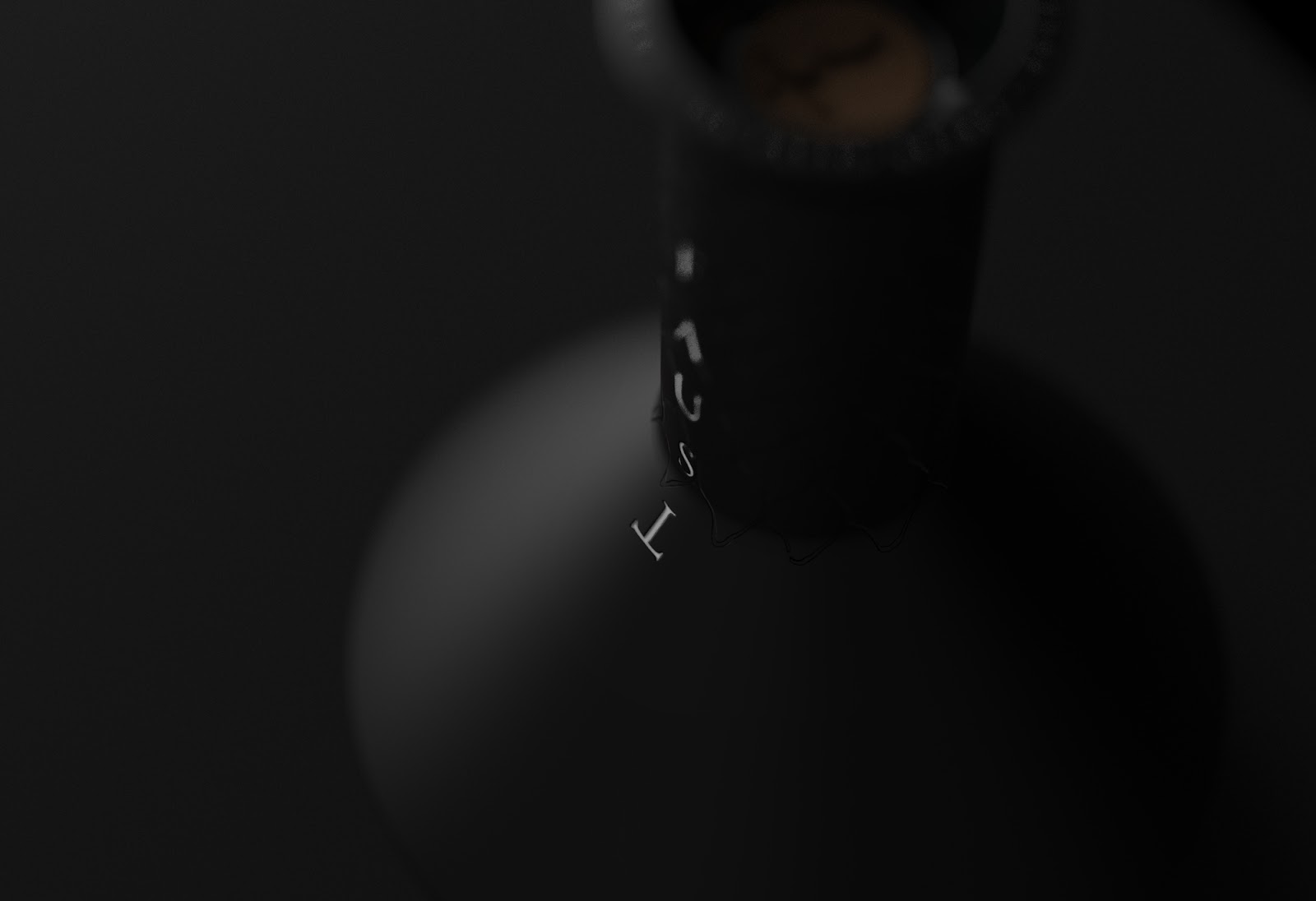 The outer packaging was planned to be both decorative and functional. A magnetic system holds, as if by dark arts, the set together: base, transport box and bottle. Once disassembled, the transport box can be easily broken into pieces and is fully recyclable. With so much self indulgence, we were obliged at least some attempt at redemption. 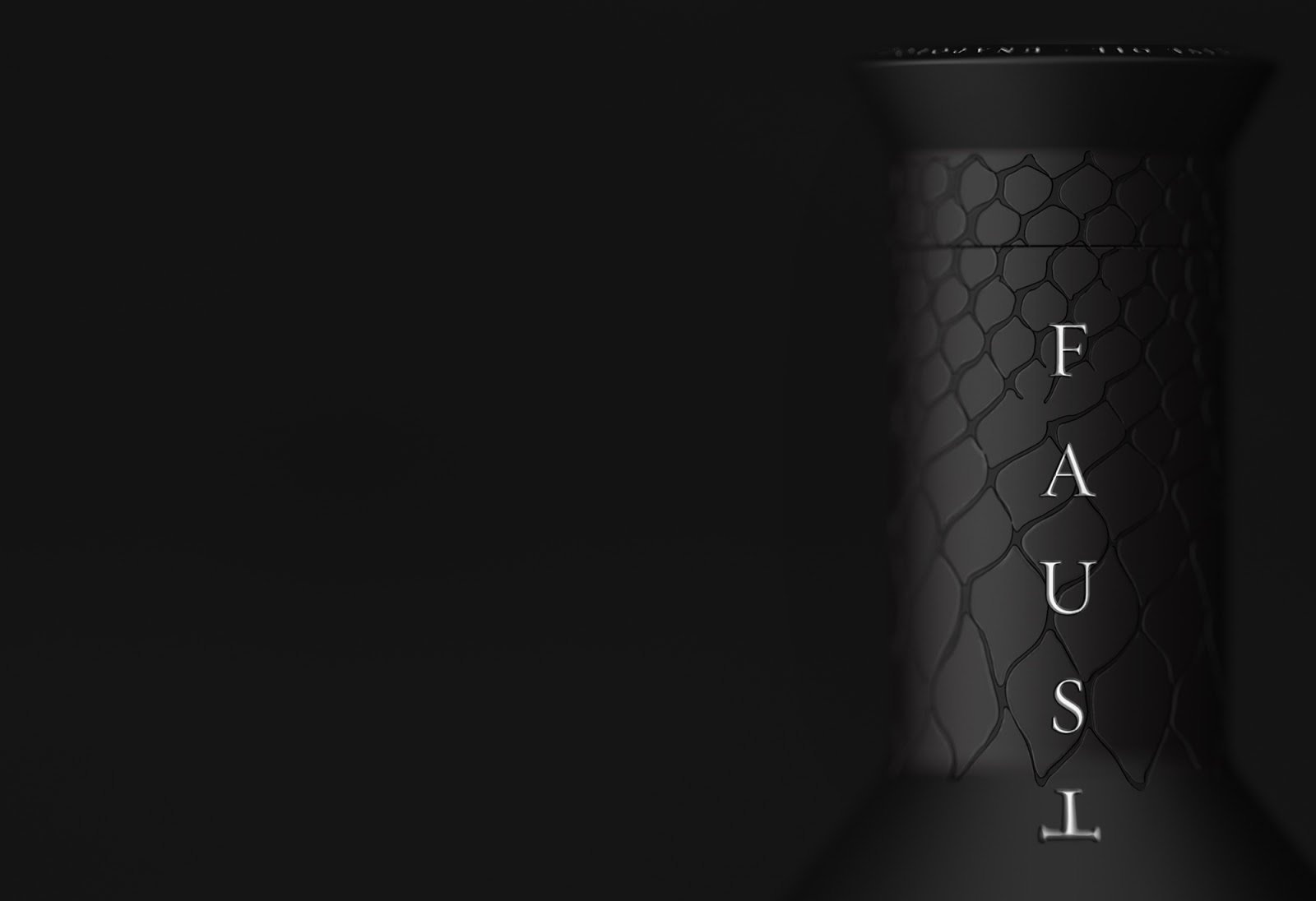 What’s Unique?
An Erlenmeyer-flask-shaped bottle, connected to the concept.
The packaging system: the magnet allows the whole package to function as a whole, with no glues or folds. When the bottle is removed, the packaging is easily recycled and the cork bottom functions as a stylish base to keep the olive oil. 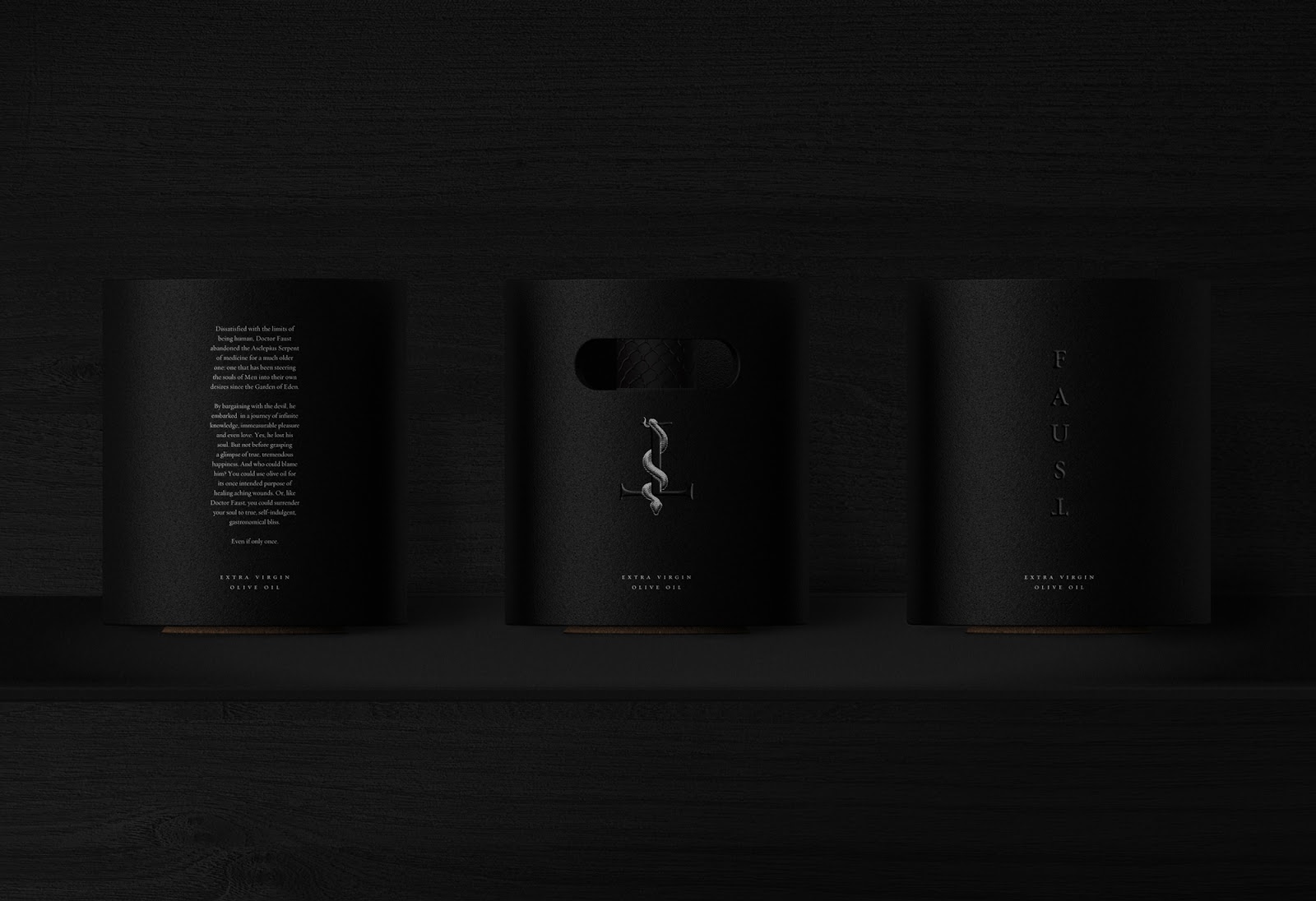 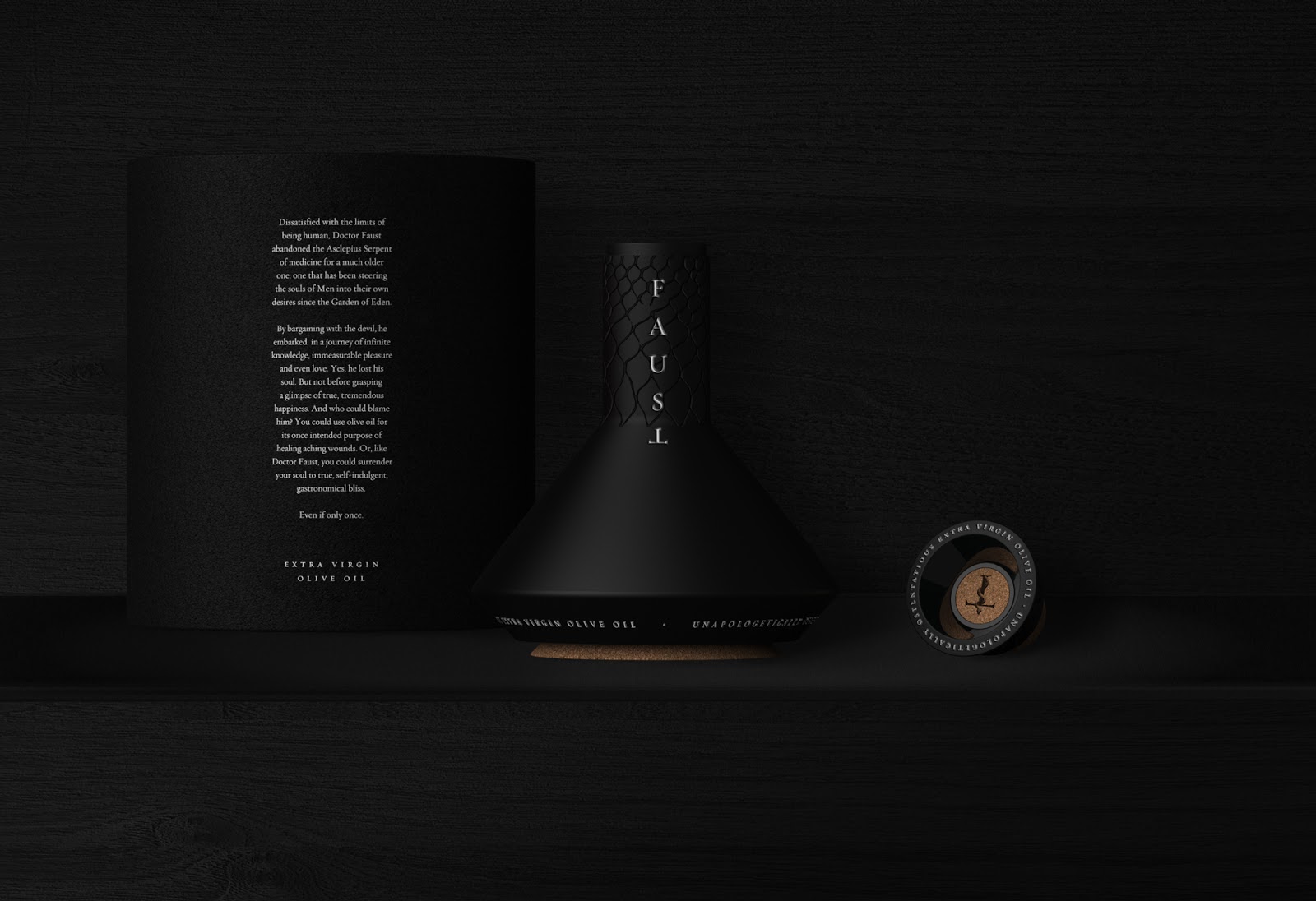