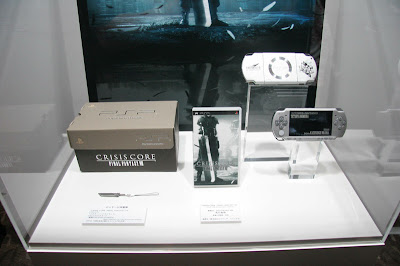 “Square Enix released a special edition bundle for Crisis Core, which included a copy of the game which had a special box cover art of Zack Fair standing in front of Shin-Ra HQ holding the Buster Sword in front of him special silver coloured slim and light PSP with Final Fantasy VII 10th Anniversary insignia on the back, on one side, designed by Tetsuya Nomura, and the meteor from Final Fantasy VII on the other side, Buster Sword strap, and came packaged in a box similar to that of a shoe box. As with many limited edition Final Fantasy VII releases by Square Enix, the bundle was limited to 77,777 units.”