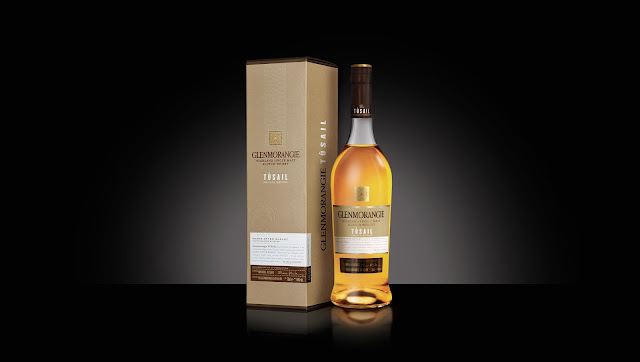 Glenmorangie Tùsail, Scots Gaelic for ‘Originary’, is the sixth addition to Glenmorangie’s award winning Private Edition range; for which the packaging has been lovingly crafted by ButterflyCannon. This rich and rustic Glenmorangie expression draws on the unique flavour of the hearty Maris Otter barley, a now rare barley that was previously the cornerstone of England’s craft brewing industry in the 1960s.

The packaging design romanticises this bygone era with its layout and typography reminiscent of the Malt House’s inventory books. The dominant colour inspired by the traditionally hand turned and floor-malted barley; dusty, warm and golden, accented with a nut toffee brown – one of the key flavour notes of the liquid. The high gloss white torn off label with its deep brown and shiny gold foil blocking sits in direct contrast to the box adding a bit of prestige to this crafted rural design. A heavily debossed stamp signs the design off in an authoritative way reinforcing the use of this rare and flavoursome barley.

Mike Atkinson, Global Marketing Manager at Glenmorangie comments, “It has been a pleasure working with ButterflyCannon, they have managed to really capture the essence of the expertise and craftsmanship required to create this unique whisky.”

Ben Cox, Lead Designer at ButterflyCannon adds: “The challenge was to balance an overtly rustic and craft brewing story with a rare prestige malt whisky one. The design needed to reflect its rural heritage whilst still appealing to the sophisticated connoisseur consumer. The concept of an additional label to the carton was a great way of marrying this contrast in a harmonious and elegant way.”