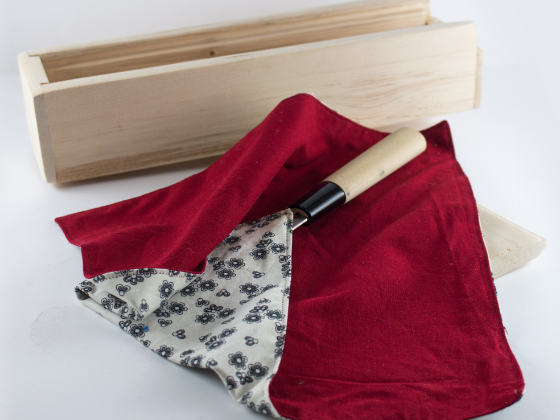 Project Description: For this project, the goal was to find an overly packaged item and redesign it to create something more environmentally friendly. We were allowed to choose anything we deemed to be overpackaged, even if the packaging seemed alright. My goal was to create a package that could be used again, either as individual components or as one piece. I wanted to make sure that any waste from the project was one hundred percent recyclable. I also wanted to create a package that turned a simple pairing knife into a beautiful gift to be opened.

Environmental Considerations: When walking down the aisle of any store, it is unlikely that you will see more than a couple of packages with no plastic involved. Since the invention of plastic, it has been involved in packaging whether that has been as a plastic sleeve, bubble wrap, slips of plastic, etc. Even if it is made reusable (hard plastic), most of it ends up at the dump where it will take hundreds of years to break down completely. I wanted to create a simple enough package that could be completely reused, and if the person has no interest in reusing it, it could decompose naturally. For this project, I used the following:

Design Concept and Solutions:
My goal was to create a package for the product that could do a better job of representing the product inside. I wanted to completely eradicate the use of plastic, make a package that created less of an impact on the environment and was beautiful for the user to look at as well as. The original package that was cardboard and plastic and I did not think that it matched the quality of the product inside, a Japanese pairing knife.

The purpose of the item inside is to be used as an everyday knife for cutting up vegetables and fruit. My goal was to create a package that reflected the rich culture and heritage of the country that it was made in. I wanted to wow the user and make something that they would be inclined to reuse and if not, know with certainty that they could recycle it.

I began by looking at Japanese knives, the beautiful simplicity to the hilt matched with the rich texture of the blade. So much beauty deserved something more. I remembered reading about Japanese joinery a while ago and after reading up about it again, the idea came to me that I should make a box for the blade and use no nails. It would be better for the environment and would reflect Japan.

I decided that I wanted my audience to be a culinary student or a professional in the industry. I wanted to create something that would give that person absolute joy to open. The idea was that I wanted the person opening it to have the same emotion a design student down when opening their MacBook packaging up for the first time. That feeling of excitement while opening up the layers of the box to reveal the item inside is what I wanted to promote.

I was planning to seal the box closed with a wax seal to give a sense of elegance. However, someone pointed out to me that this would leave a stain on the box. I also realized as I stood there with it in my hands, that a wax seal was too much, which is why I decided to wrap it in tracing paper instead. A great thing about the tracing paper is the auditory sensation of unwrapping it and the relation it has to actually receive a gift from someone. Suddenly, without me having to nudge anyone into thinking so, the package actually did look like a gift while keeping the box below visible.

I also considered placing a seal anyway on the paper wrap but decided I loved the simple elegance of the wrap alone. Sometimes, even if you think you have a concrete plan, when it comes to the creation side they fall to the wayside. That is why creating a prototype is so important.

Initially, I also had lofty plans for painting a beautiful scene on the lid of the box. However, during our feedback week, I had a lot of the students tell me that they loved how simple the box was, that the concept even reminded them of home. One of the girls told me that she was studying in Canada because she wanted to buy and sell products and she would definitely want to sell my product in Japan!

I was pretty attached to the idea of painting, but you learn a lot in design as you go through and build products, that sometimes it’s best to kill your darlings. Getting attached to one concept is a bad idea.

I found instead that I could create a colour pop by taking the wine red from the Japanese flag on the paper wrap and matching it to a fabric, which I then sewed into a handkerchief with the help of my mother and sister. I proudly did the inside seam and ironed it, but when the time came to sew the top, my sister, with her costuming diploma, stepped in for me.

The end result is a beautiful, simple yet elegant gift. When opening, the user has to first slide off the paper wrap, open the tracing paper, slide back the lid and then finally unfold the handkerchief to reveal the blade inside, safely nestled within the fabric to keep it from moving while in transit.