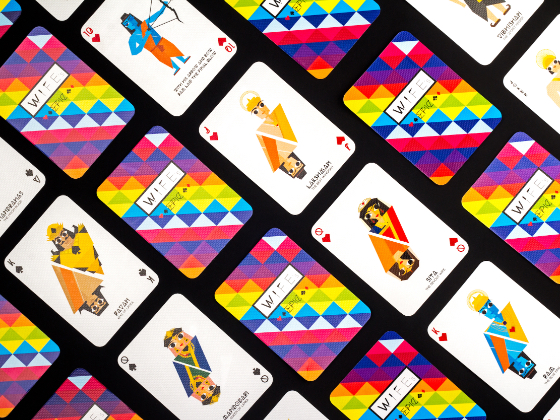 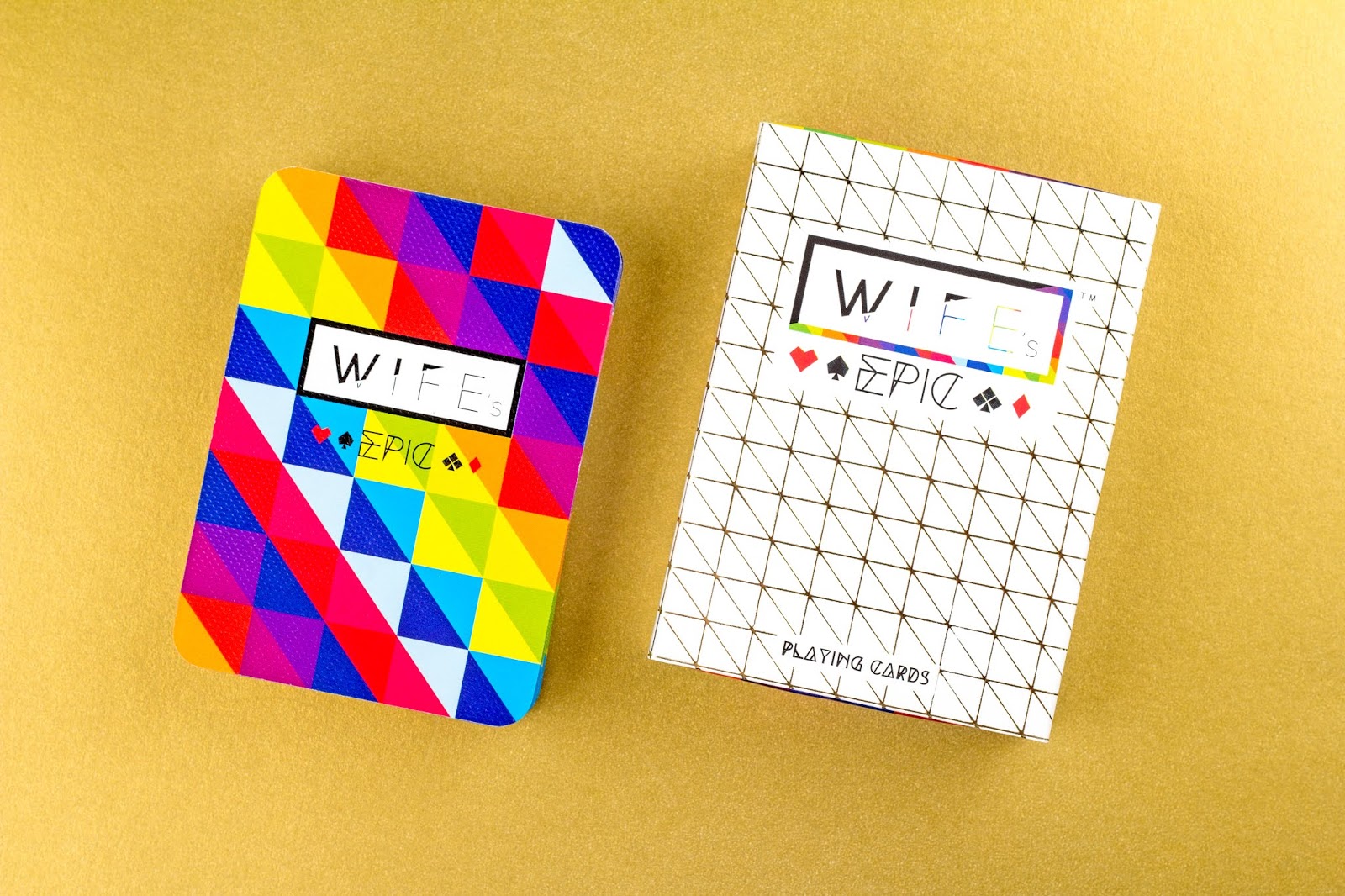 Every Diwali, Wife (a young creative and brand management agency), sends out something special to their clients to celebrate the biggest Indian festival. This is something Wife takes great pride in because whatever has ever been gifted has always generated excitement and appreciation alike. As a consequence, with great pride comes great obsession with giving memorable gifts, an obsession that led to the conception of this gifting masterpiece.

To understand what the gift would be, we had to first come up with a list of all those things that made Diwali feel like, well, Diwali. From this list emerged the enemy of Diwali night itself, an enemy that hid right under our noses this whole time. That enemy was the bland and life-threateningly boring pack of playing cards, core to the culture of Diwali. These cards have forever haunted our Diwali nights with their pale traditional designs and low-quality paper.

Wife decided that something had to be done, this foe had to be vanquished and that our Diwali game of cards had to be as colourful as good old Diwali itself. So we set out to forge a weapon that would finally vanquish our evil foe, the Wife’s Epic Diwali deck of cards. After all, Playing Cards on Diwali is significant and core to the culture of India. And on the other hand, Lord Ram coming back home after 14 years of exile was exactly why Diwali was celebrated in the first place. Hence, the Ramayan Playing Cards were almost a match made in mythological heaven. 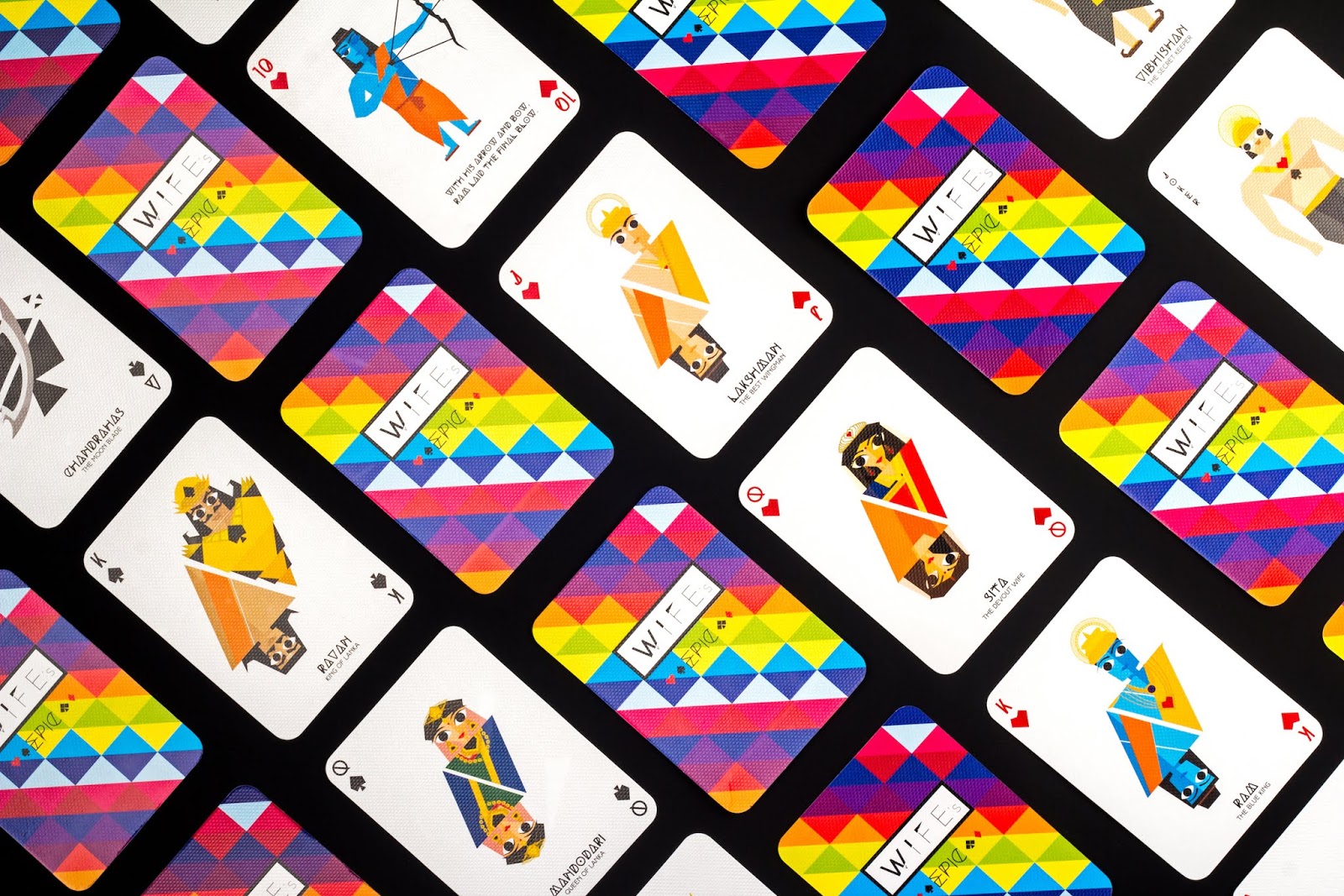 The playing cards are designed strategically and in fact, tell the whole of the Ramayan in the span of the 52 cards. The Heart is denoted by King Ram of course, and his queen Sita, the Spade by King Ravan and his queen Mandodari, the Diamond by King Dushrath (father of Ram) and Kaikeyi (step-mother to Ram), and the Clubs by Sugriv, the Monkey King. As we go linearly, from cards Ace to King, the epic unfolds from each of their perspectives. Magical and charming, historic and legendary, traditional and extraordinary, the creative aesthetics and designs had to be every bit this epic as well.

The illustrations style adopted was geometric, minimalist and neat to create maximum impact, using colours and features as key to making the characters memorable and recallable. The characters on their key cards were also denoted by two styles in order to communicate their multi-faceted lives. Every card brings in colour with its behind graphic, which is core to the Wife brand identity.

The matchbox style box was foil-stamped in a gold geometry to keep intact the festivity and culture of Diwali in them, while a small lever was provided that helped users take out the deck of cards with the utmost ease.

The cards on the back read –
“Go into exile, chase away demons in forests, abduct maidens, leap across the vast ocean, move a mountain, lay waste to an entire army of raakshas and even slay a powerful king. All this is possible only because of the most important element of any epic – Wife. Make any and every game of cards as epic as the deck inside.” 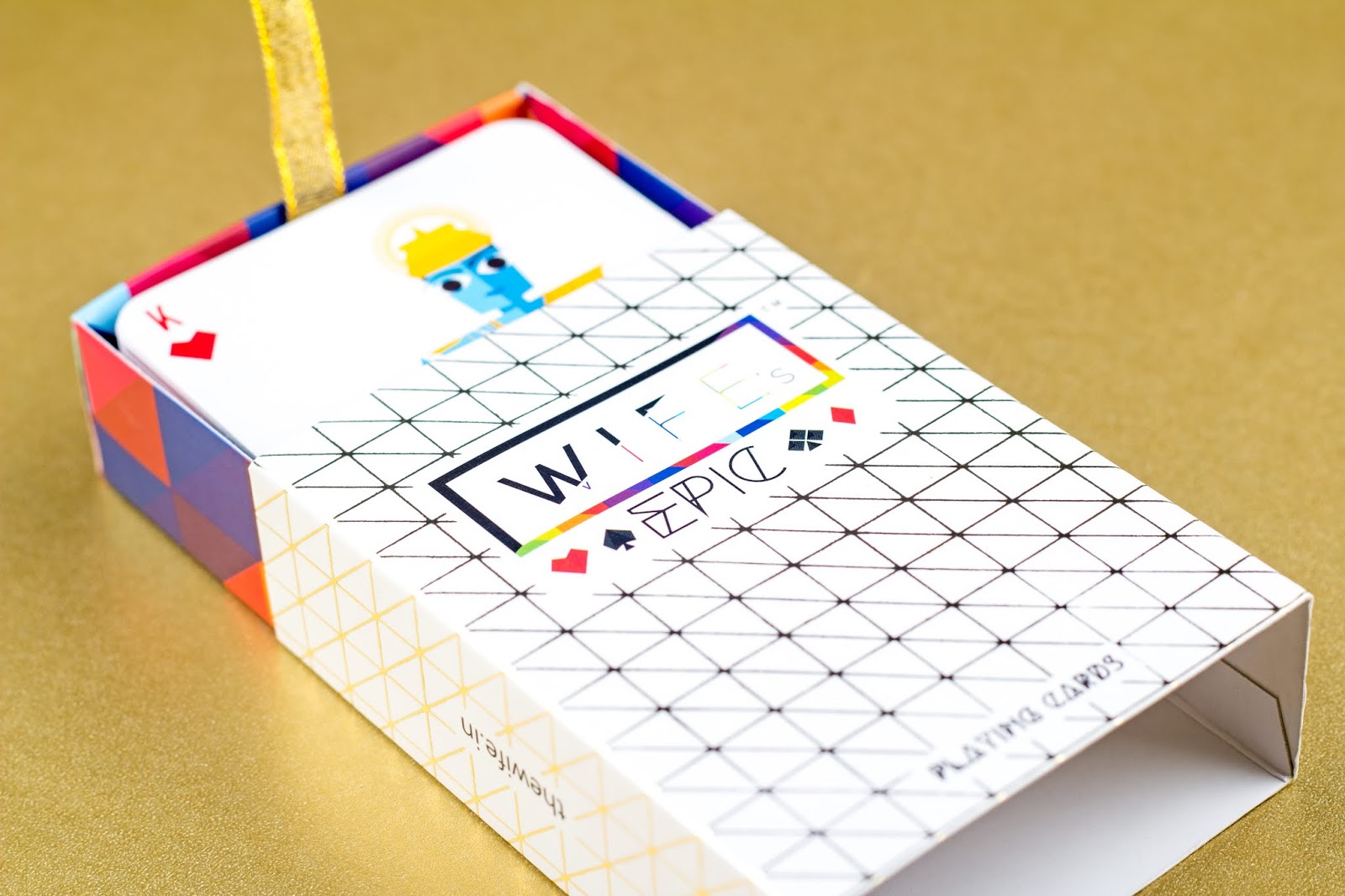 What’s Unique?
Apart from the technical uniqueness of the packaging, challenging and effortless looking at the same time – what was even more unique about this one was the fact that the real packaging were the playing cards itself. They itself packaged a unique form of story-telling concluding on a high, striking the perfect balance between functionality and sentiment and the fact that that was recognised by the end-users, was the greatest feat of this particular design.

Apart from that, these playing cards were made wear and tear proof understanding the real use of them, by coating them with a heat-pressed plastic lamination. It made them cost-effective, time-effective, stunning and long lasting all at the same time. 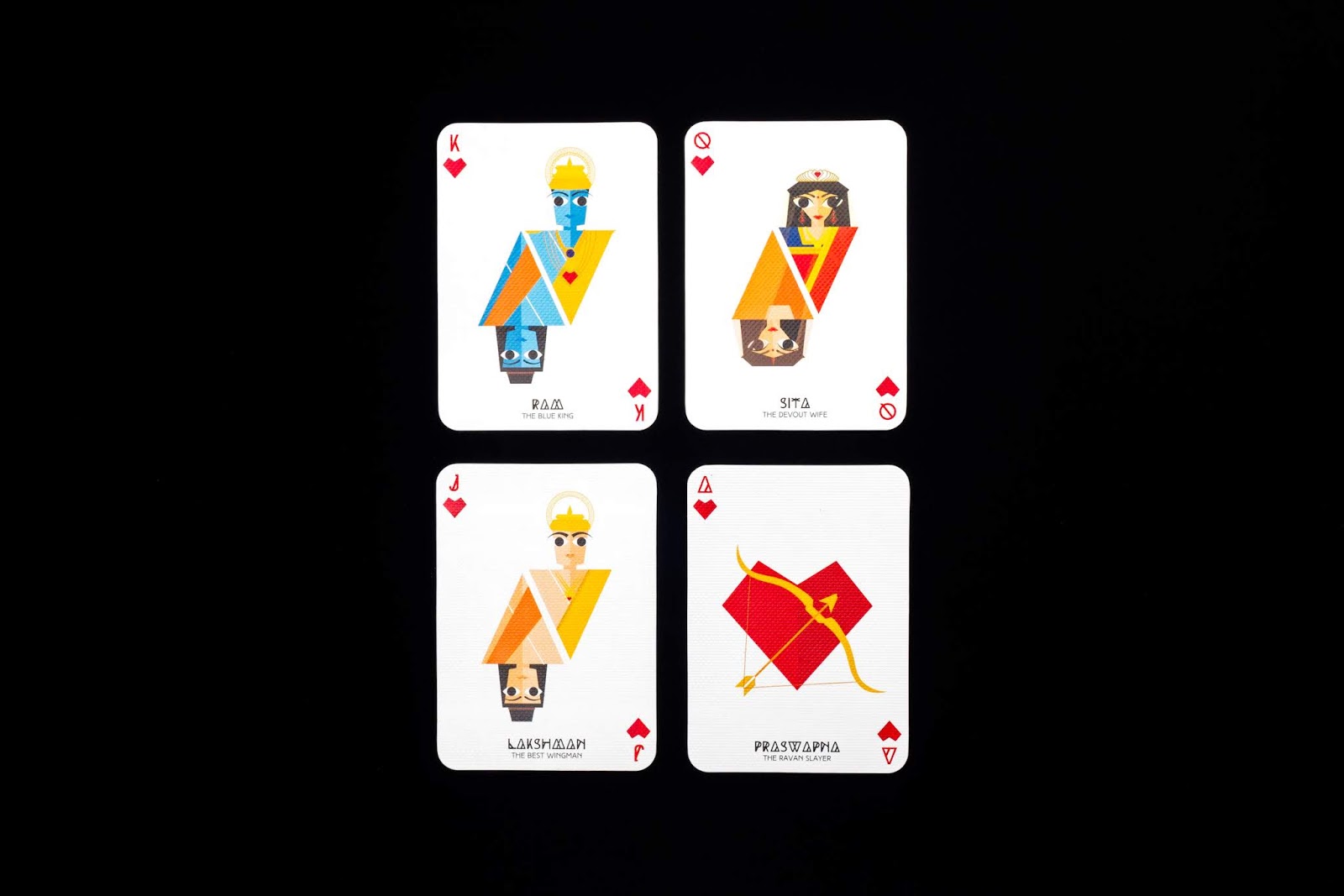 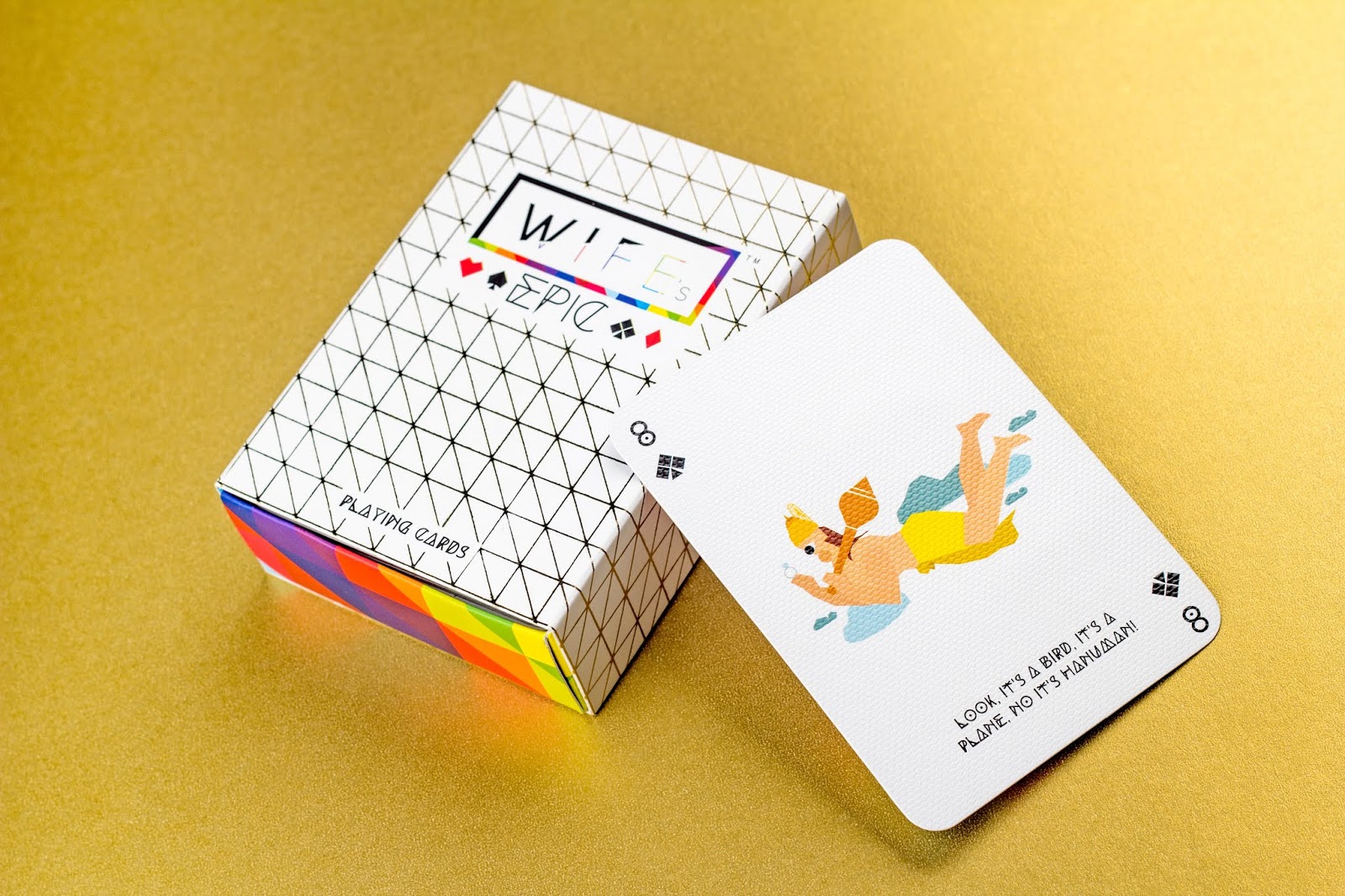