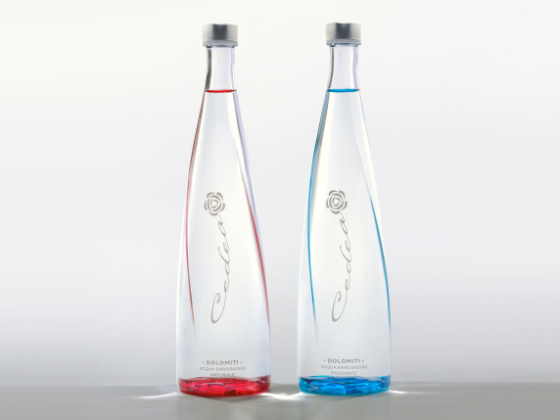 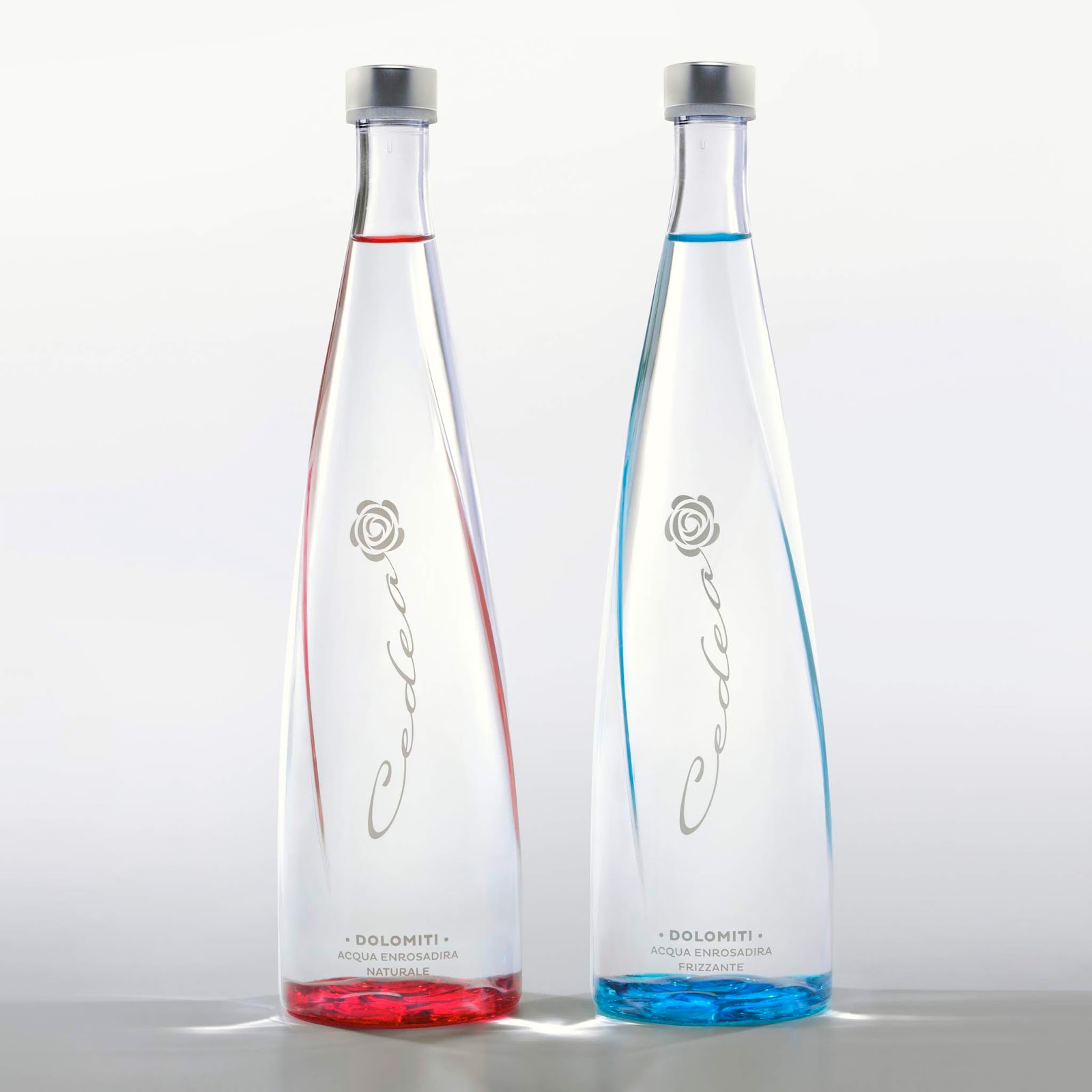 INSPIRATION
Cedea is the only mineral water from the heart of the Dolomites, in the very north of Italy.

The packaging design for Cedea luxury mineral water is inspired by the Ladin Dolomites and the legends and myths revolving around the natural light phenomenon called Enrosadira. Caused by the special mineral dolomite, the mountains light up in a reddish, burning hue at sunrise and sunset, lending the scenery a magic ambience. By “resembling the legendary magic Garden of Roses”, the packaging of Cedea wants to capture this very moment. The result is a glass bottle that makes the water glare and flare to surprising effect. The colours of the bottle are meant to resemble the special glow of the Dolomites bathed in the mineral’s rose red and the blue of the sky.

The Cedea brand mark embeds a long stem rose flower, again symbol of the Garden of Roses, while the name itself is also based on the local Ladin traditions: after Cedea, the Goddess of Water and Life. 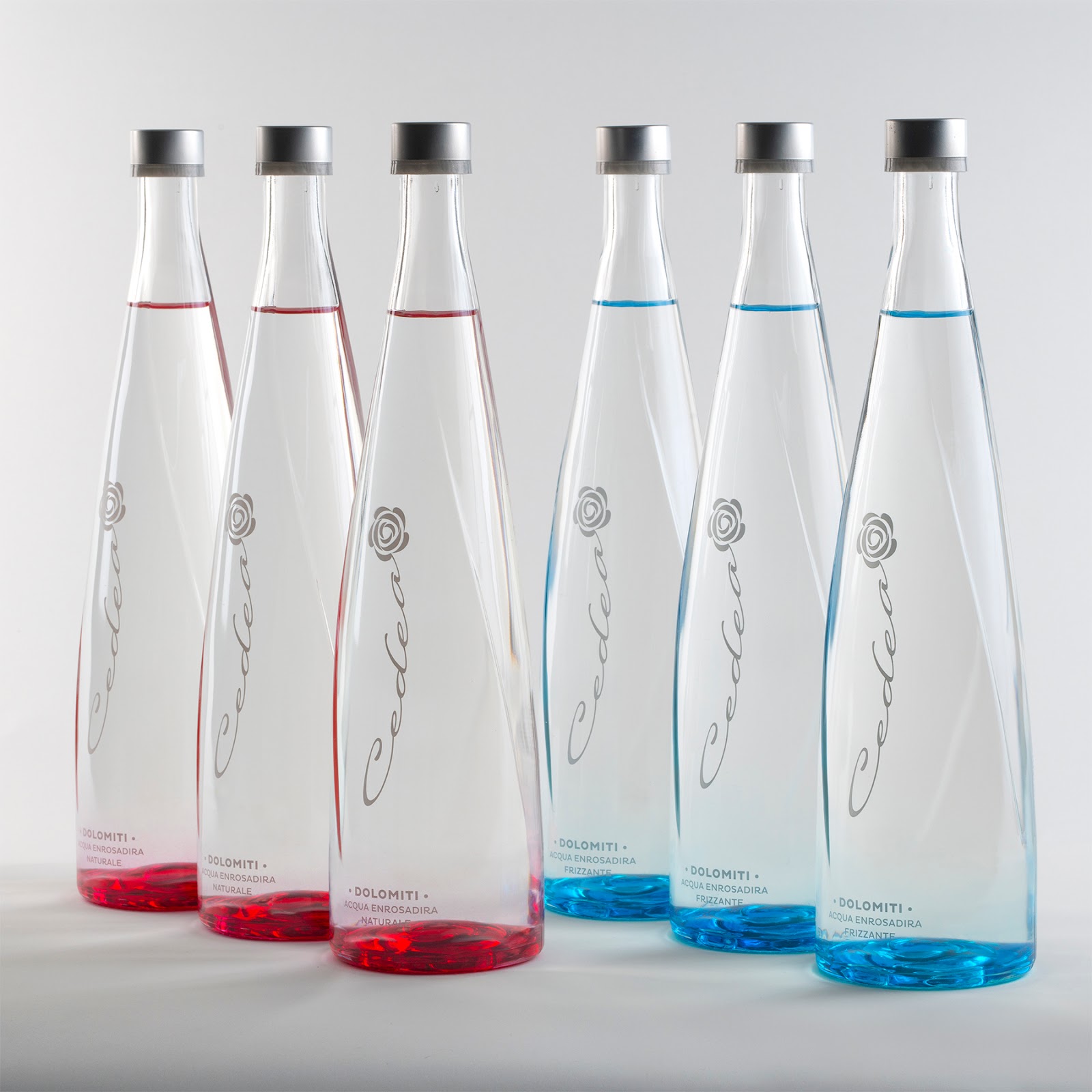 THE GOAL ACHIEVED
Cedea, a small and rare water spring discovered in the very heart of the Dolomites, had to become a premium high-end bottled water carrying the Dolomites’ values. Inspired by their romantic legends, Cedea water glares and shines vibrantly inside its bottle. Noble, elegant, surprising, sensual, its look reflects the quality of its source, one of a kind.

Ultimately, Cedea is the uniqueness and the magic sensation of the Dolomites, known for their beauty. 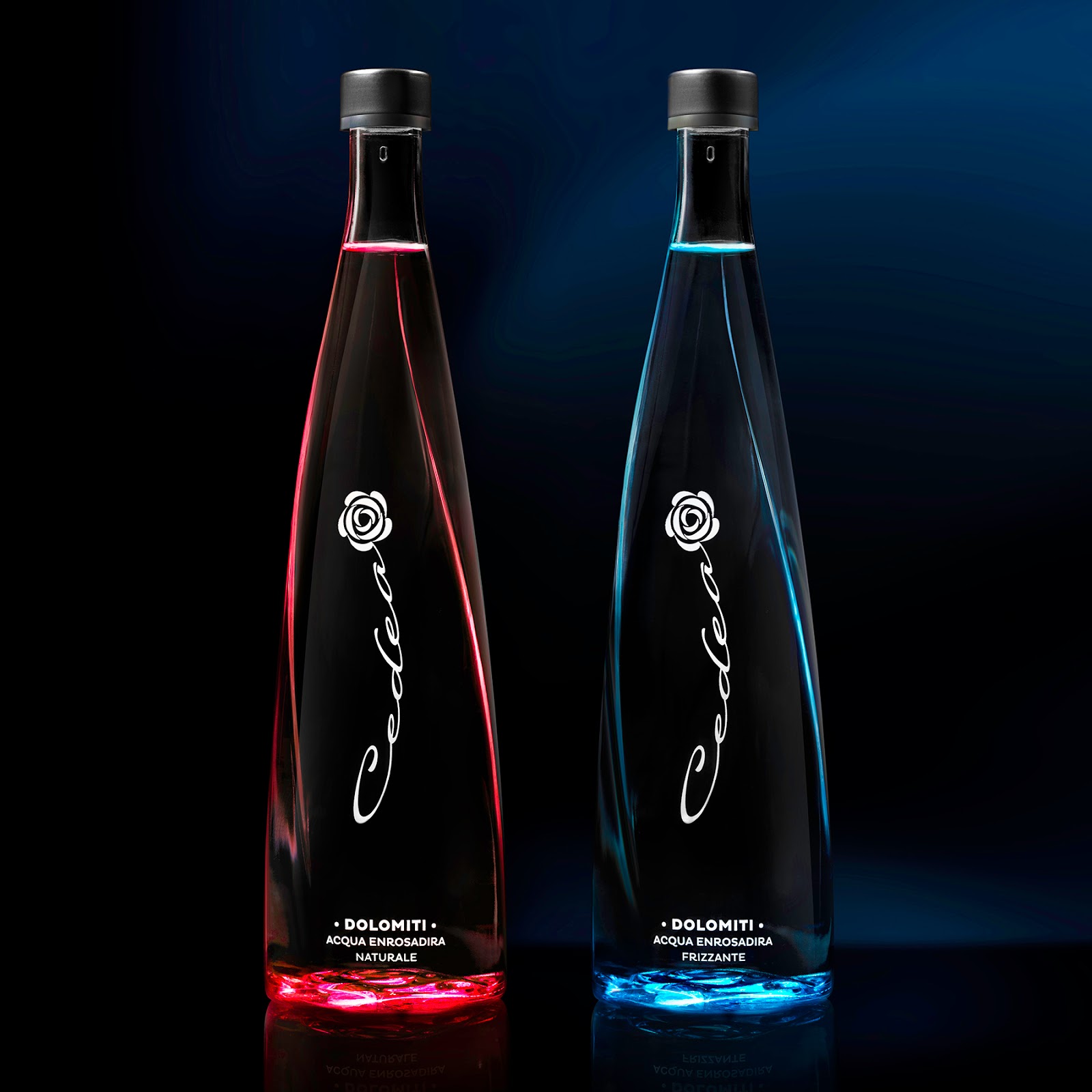 PROJECT DESCRIPTION
Cedea comes only in first-quality white glass. The quantity of glass needed to make a bottle is higher than normally. In fact the bottom is unusually thick, to allow the embedding of the Cedea rose symbol. Such thickness emphasise also the “lens effect” that makes the symbol very visible in its carvings. Furthermore, the bottle is sensibly taller (32cm) compared to most waters, to make a shape elegant and smooth. The shape is quite peculiar, as on the curved body there are three engraved twisting lines that from the bottom reach the top. These lines make the bottle always delicately asymmetric, giving it a natural and unique silhouette.

The bottom is vibrantly varnished in pinky red (still quality) or turquoise (sparkling) and its colour spreads up into the bottle through the twisting lines and through the water itself. The final effect is surprising and unique. Technically speaking, making such asymmetric shape is quite difficult, because of the mechanic opening of the glass moulds. In Italy only one glass maker (specialising in distillery) was able to meet the expectation.

The labelling is all silkscreen printed. The back label is shifted on a side: its position makes it disappear when looking at the bottle frontally, so the front logo is clearly visible with no elements in its background.
The cap is minimalist: a cylinder in sleek aluminum delicately printed on the top with the Cedea rose symbol. When opening the bottle, the tamper evident ring comes away with the cap, so the neck of the bottle is left clear and clean, to be more elegant.

A custom designed Gift Box is available for the twin bottles 750ml. It’s made in thick paper (Black Sumo 2mm by Favini) and was specifically designed in order to let the light in, illuminating and emphasising the colour glaring effect of the two bottles still and sparkling. The box is obtained from one sheet, folding and self locking with the handle. It’s subtly silkscreen printed and open on the front side, to completely display the bottles. 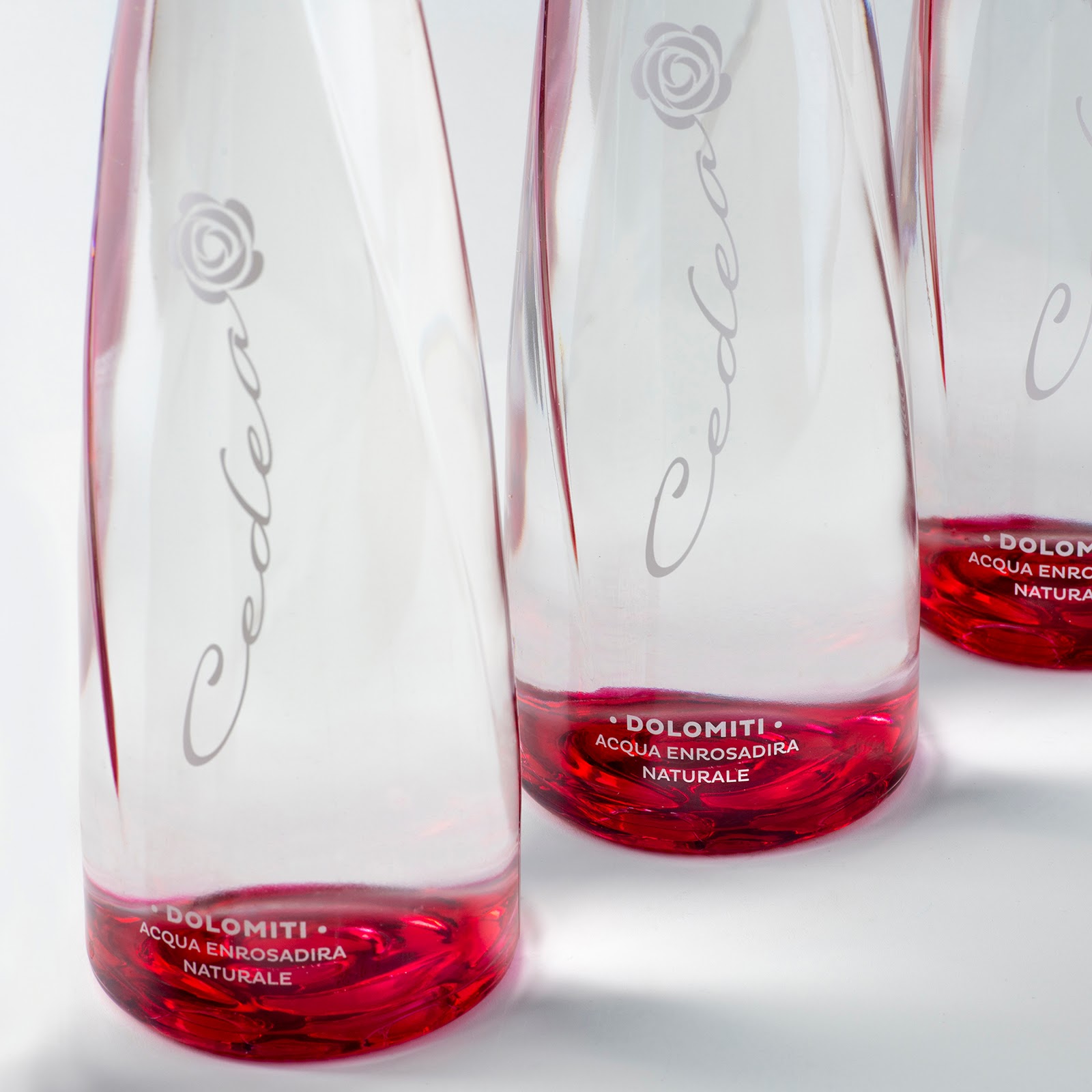 THE STUDY AND RESEARCH
The packaging for Cedea needed to be special. Unique, exclusive, but also elegant, smooth and memorable. The search for the wow effect led to using the water inside the bottle to be part of the packaging surprising look. The prototyping and experimentation of this was quite long and complex, as understanding the reaction of water to reflections and refraction of light is not an easy task. Special models were made using special techniques, until reaching the effect we aimed to.

Cedea was unveiled in spring 2018. Launched on the market in November 2018.

Cedea is the official mineral water of Automobili Lamborghini. 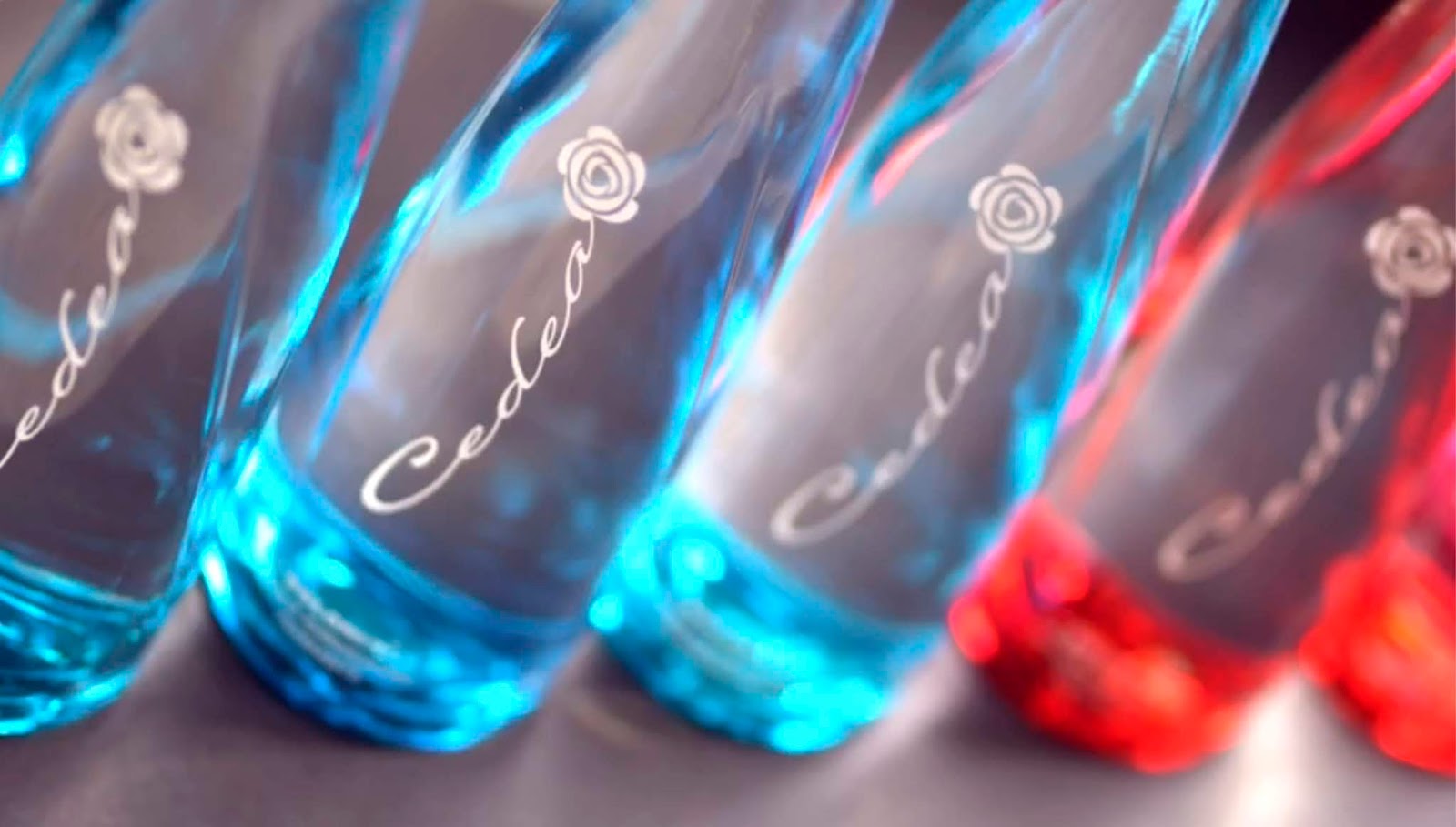 What’s Unique?
Cedea is surprising and unexpected. Very eye catching on the table, it sparkles up the curiosity of the dinner guests. It looks vibrant and energetic thanks to the colour glaring, still elegant thanks to the smooth shape. The water level looks always coloured, no matter how much water is left in the bottle. Handling it is very easy because the twisting lines give it a very good grip. 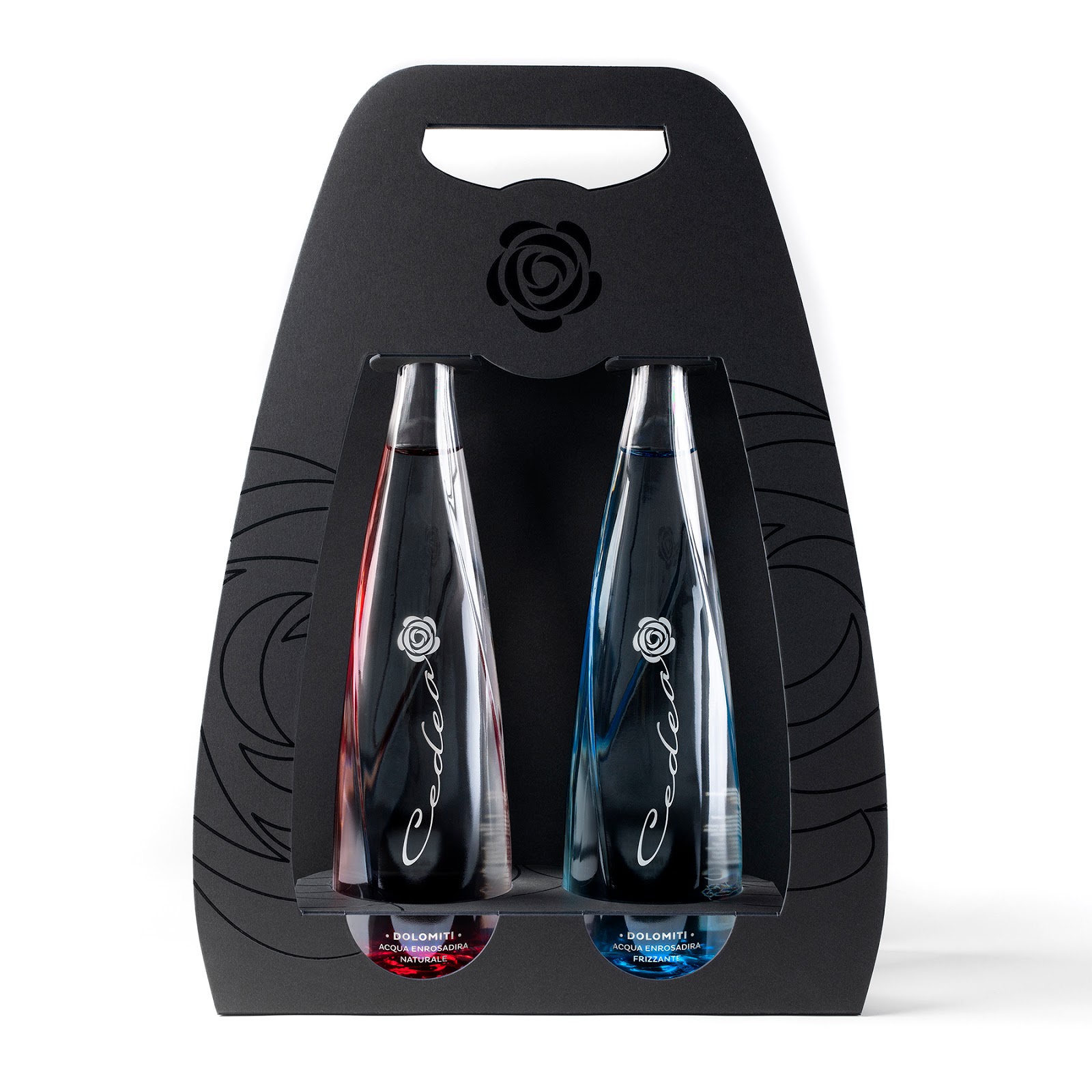 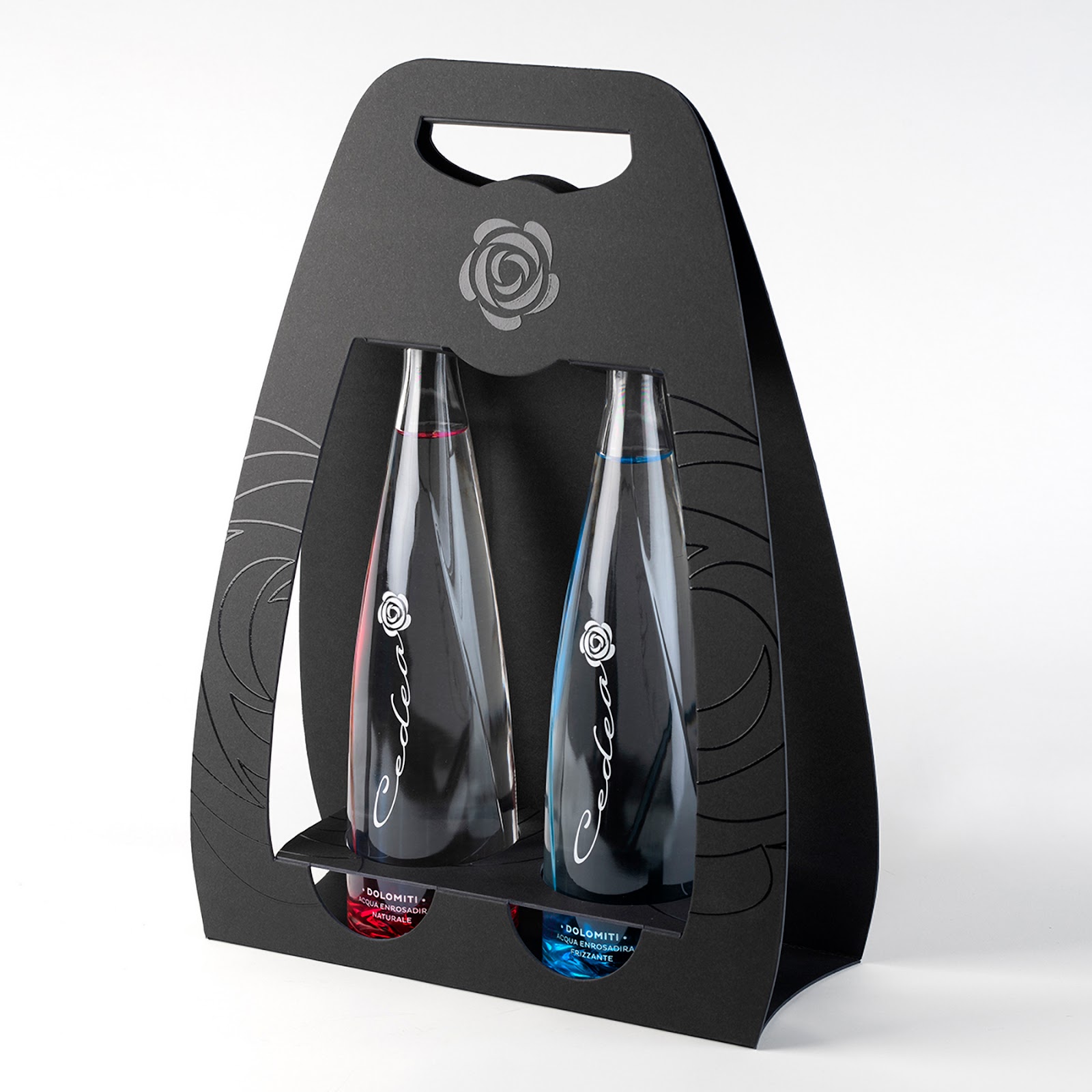 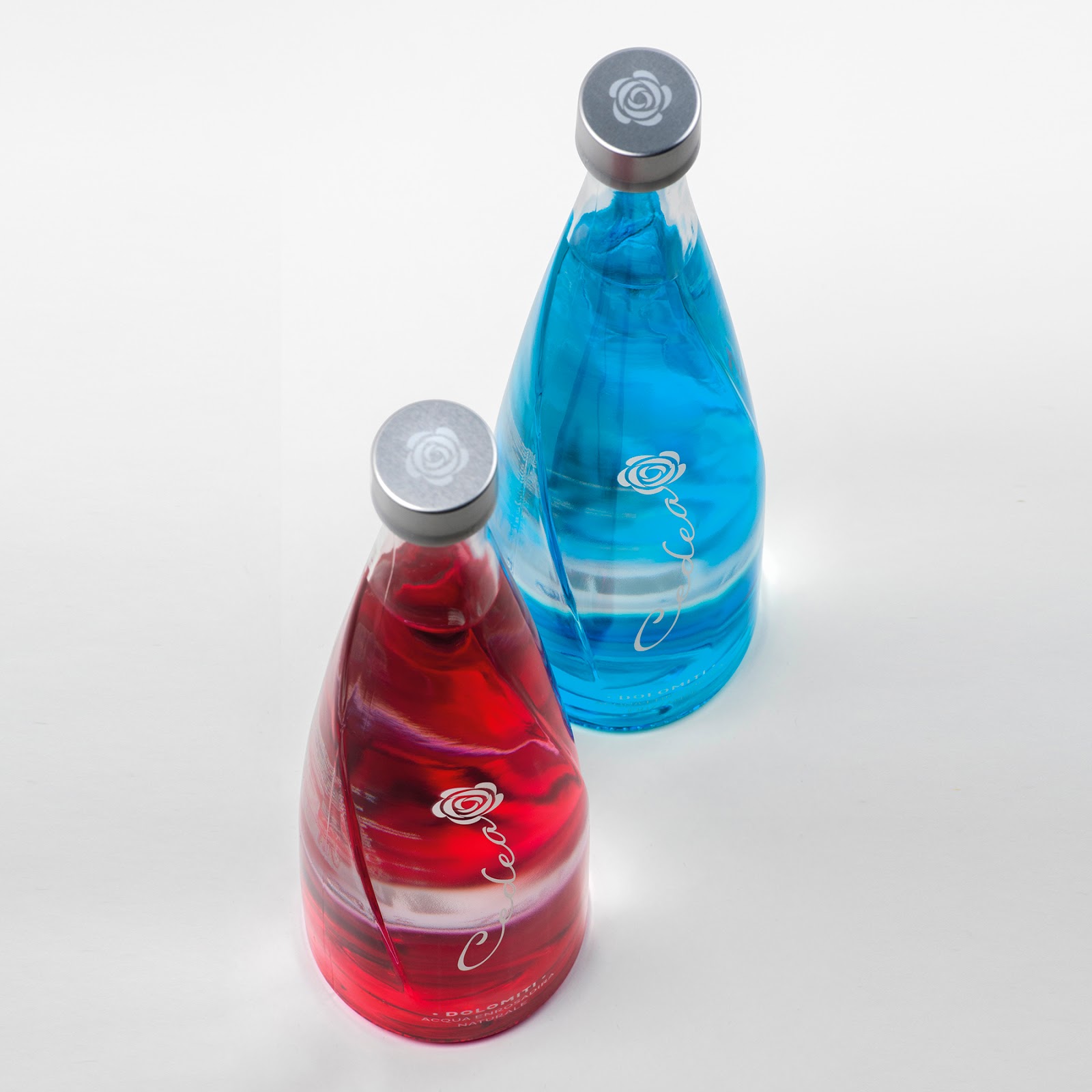 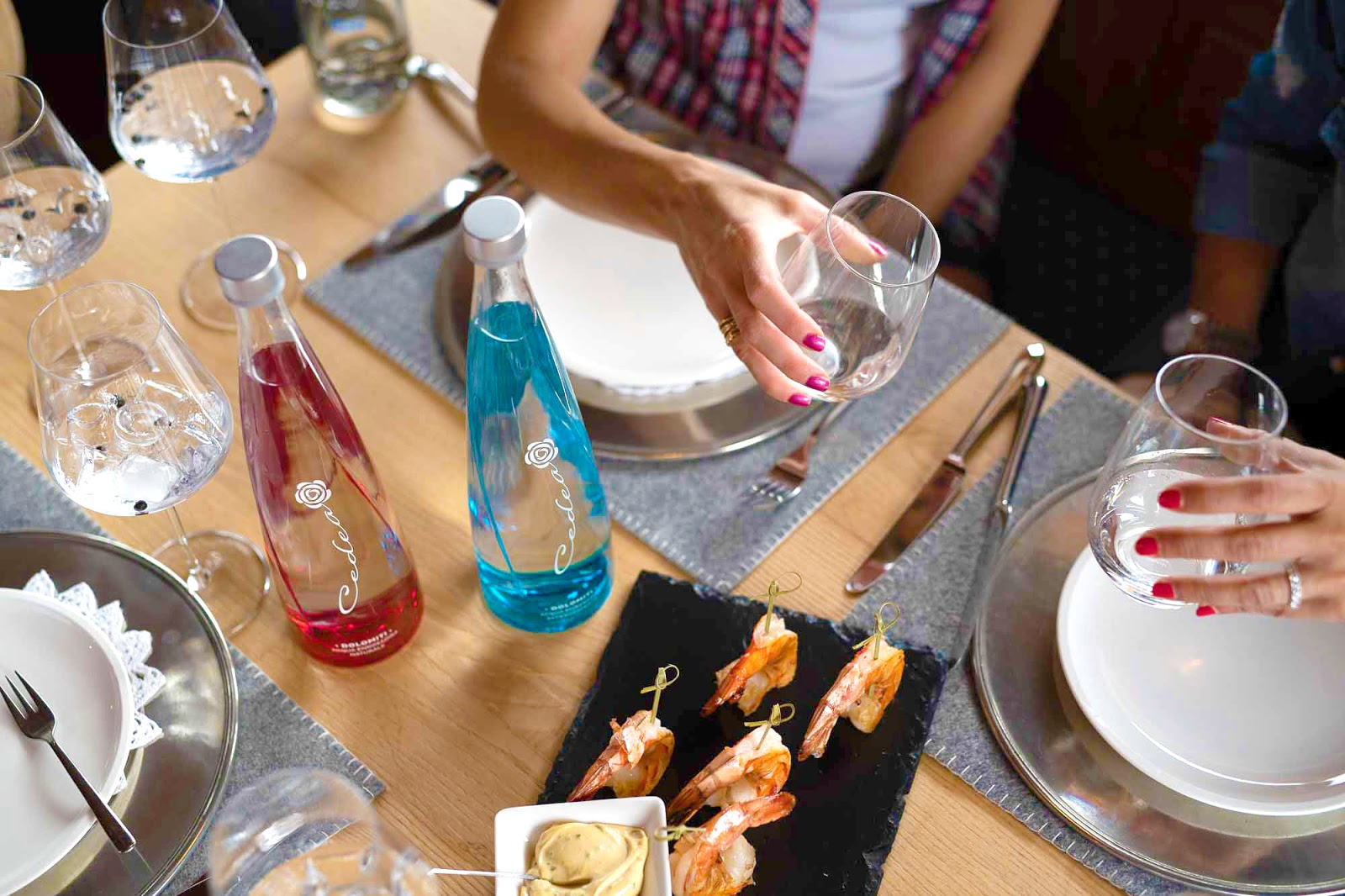 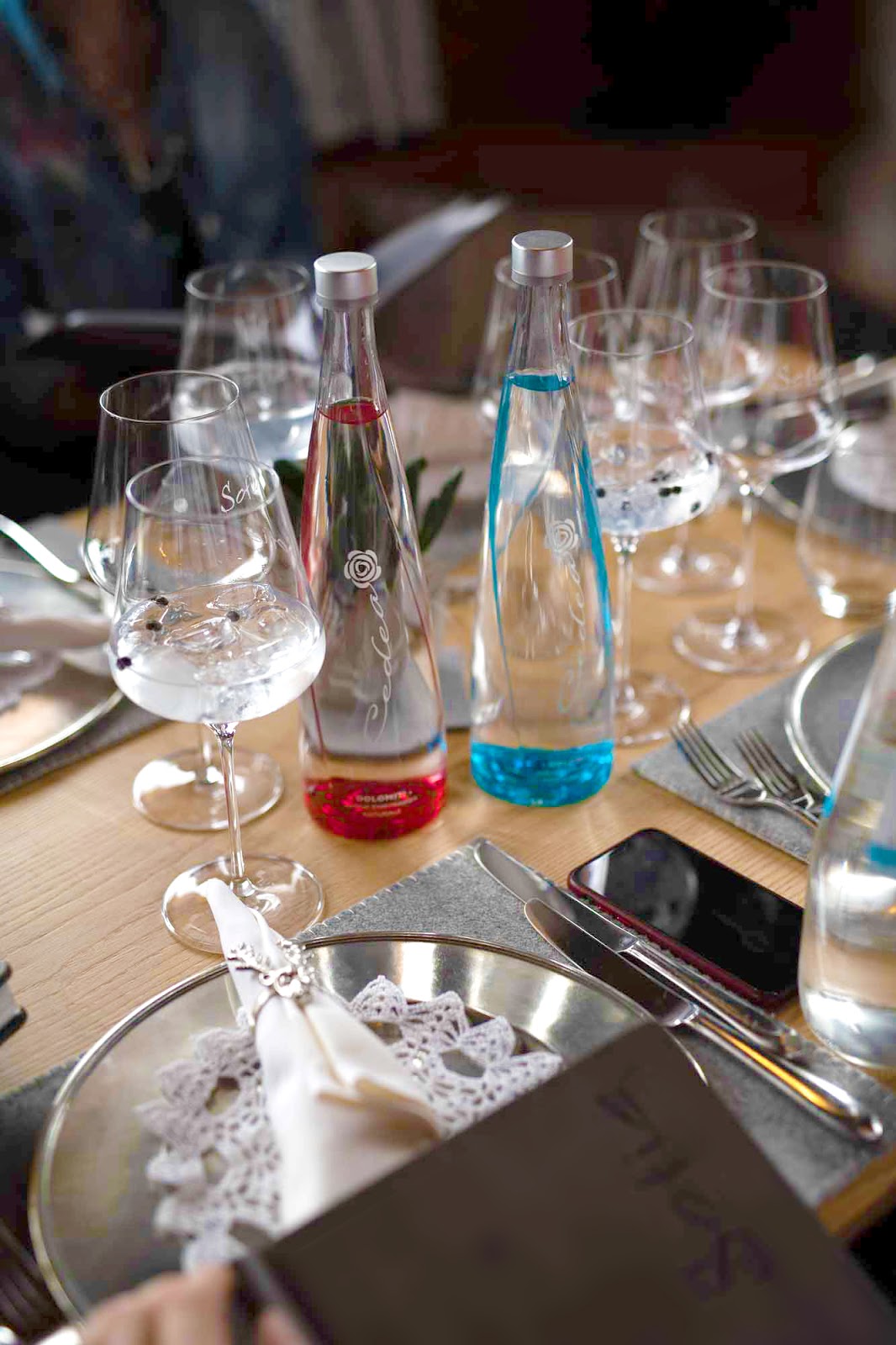 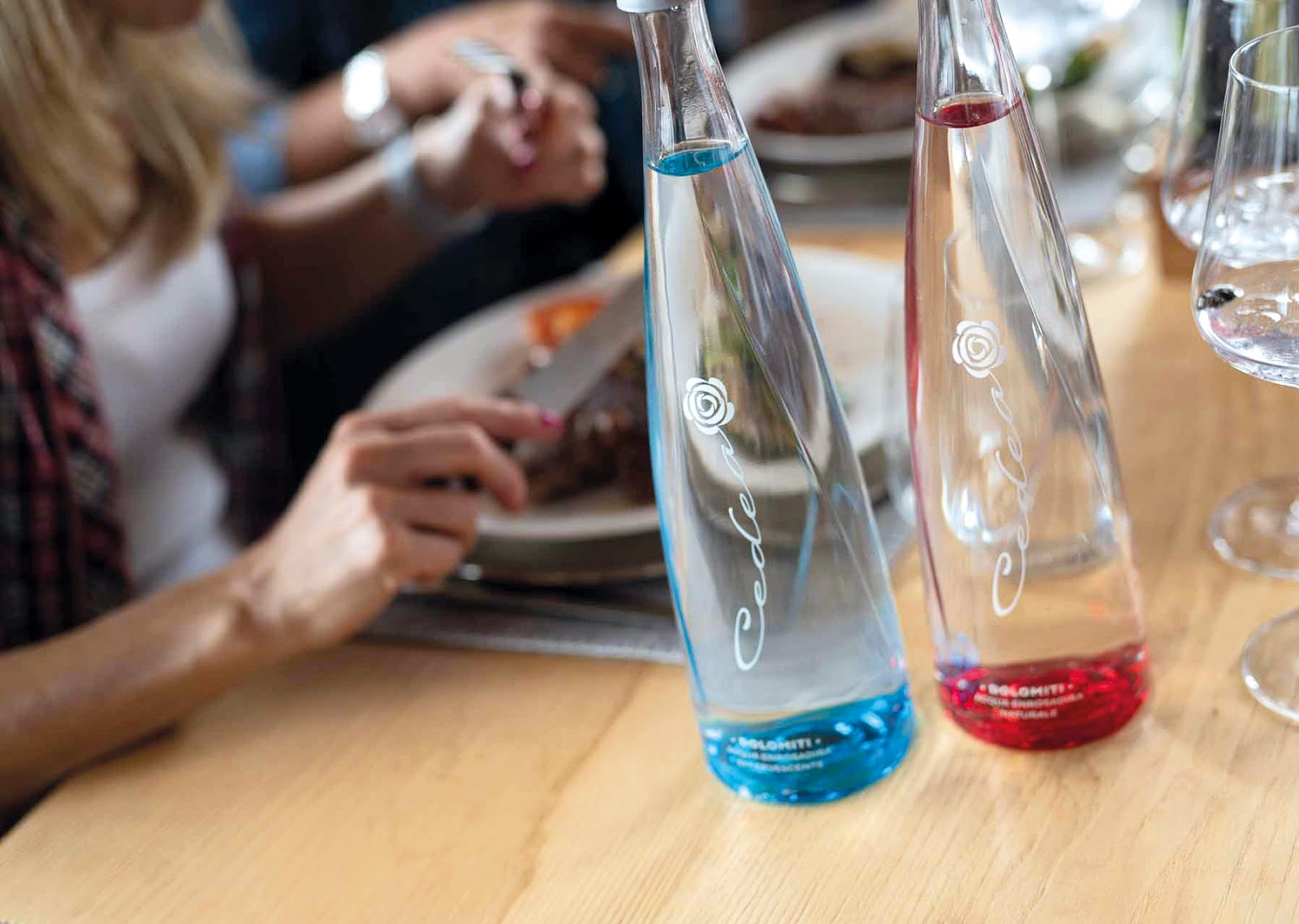