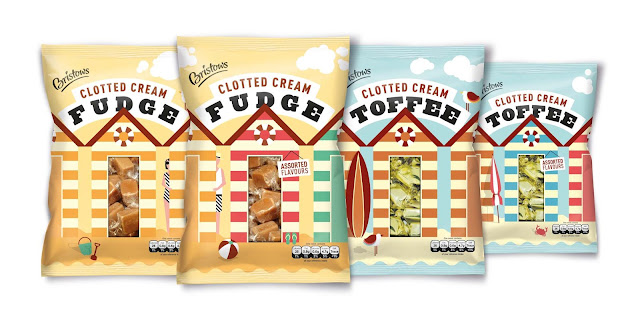 Used by the Victorians to protect their modesty and as much a part of the British seaside tradition as ‘kiss me quick’ hats and sticks of rock, the iconic beach hut provides the perfect centre-piece for Aesop’s playful pack designs for Devon-based Bristows range of Clotted Cream Fudge and Toffee.

The pastel-coloured ‘sun-kissed’ packs, which reflect the four flavour variants (plain and assorted for both toffee and fudge) feature the hut door as the pack window. The pack design also includes a number of ‘discoverables’, such as a crab and a seagull, which are fun, engaging and add character.

Produced by Aesop designers Gabriel Soto and Harriet Beesley the aim was to create an evocative world around the product and to communicate the brand’s cheeky attitude. Bold and fresh, the design approach has bags of charm – the brilliant British seaside captured with a modern twist.

On shelf, the packs also pack a punch. Lined up to create a row of multi-coloured beach huts, it’s an eye-catching, impactful approach and a nod to the brand’s Devon heritage.

The newest addition to the Bristows family, Aesop have previously created critically acclaimed packaging for both Bristows Traditional and Bristows Chewy Bonbons.