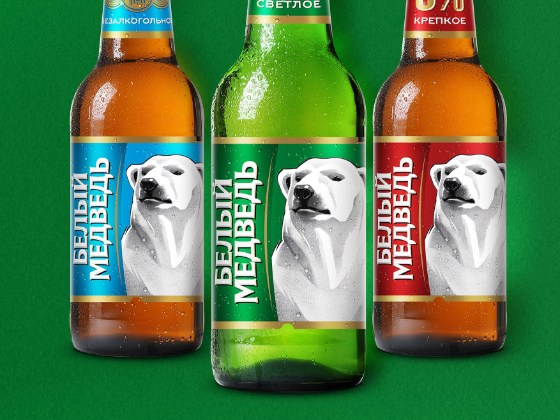 Redesign of the popular White Bear beer brand
The brand came out in 2001 at the Ufa brewery, when the company’s technologists developed a recipe for the White Bear Lager. In 2003, the company was acquired by Efes Breweries International N.V., and courtesy of the new owners, the local brand made it to the big leagues, first on a nationwide scale, and then internationally. During next 10 years, the drink’s production increased by 5 times. Over the many years of its existence, the brand has come a long way, growing from a regional brand to a national leader that is now one of the largest beer brands on the Russian market.

To maintain and strengthen its leadership in the face of a rapidly changing beer market, the brand team made the decision to turn to the Viewpoint agency with the task to update the existing packaging. The primary objective of the redesign was to create more skillful, more concise and up-to-date graphic solutions, boost visibility and infuse more character in the brand icon – the image of the Bear. 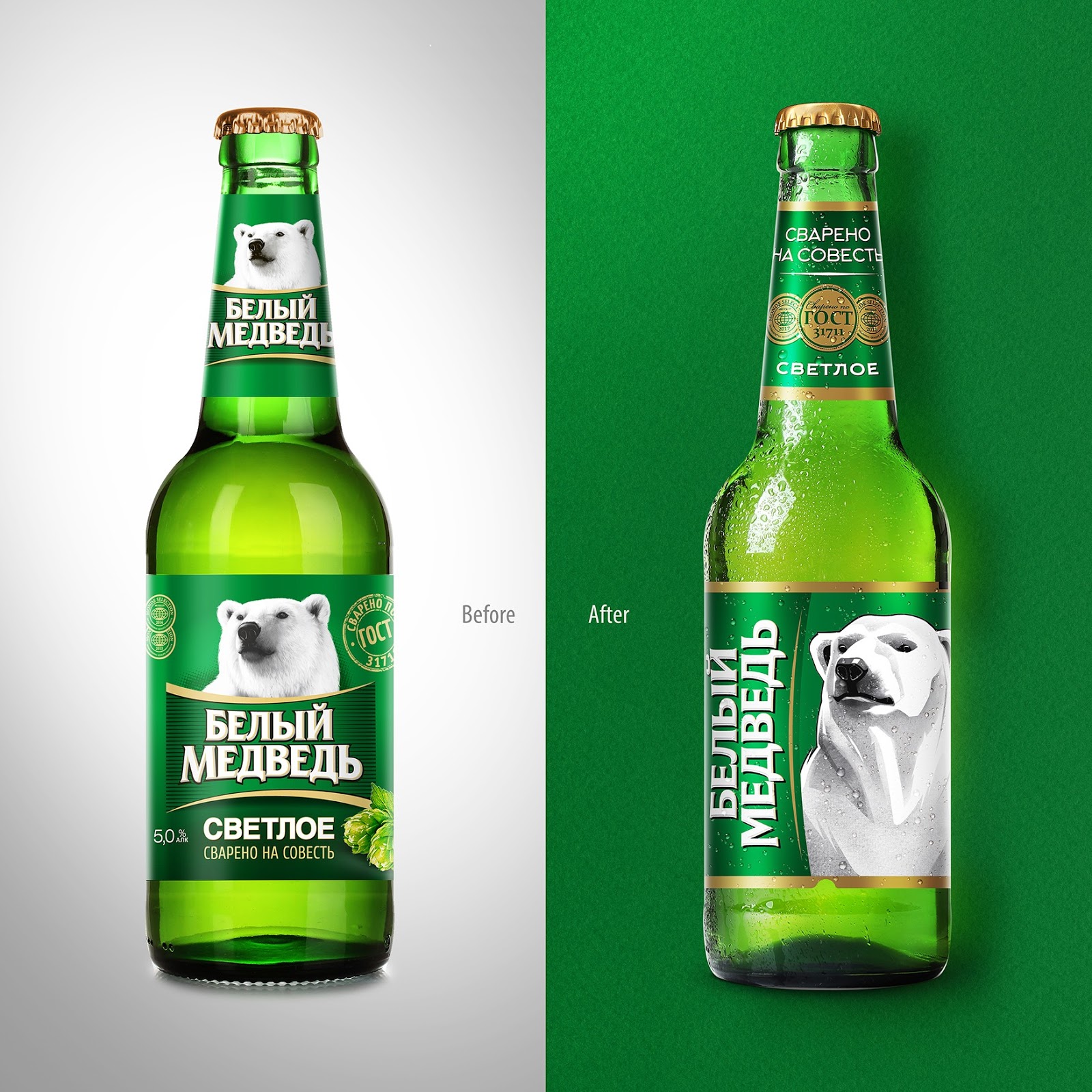 It was the updated image of a White Bear that became the predominant focal point of the new design. Visually, it now projected a manlier and stronger attitude, and the artwork itself was executed in watercolor style to give it a little more character. The rest of the elements, such as the name of the beer type, medals and a tag line “brewed conscientiously” designers placed on the bottle collar, this solution allowed us to achieve visual purity and the needed degree of structure in general.

In the course of working on the project, the new design was adapted for all the various types of beer that the brand currently has to offer, be it Strong, Live, or Non-Alcoholic, as well as for other packaging formats. The brand also has got a new high-end and more conveniently shaped PET bottle, for which we have come up with an embossment in the form of a bear’s paw print and a decorative band below. 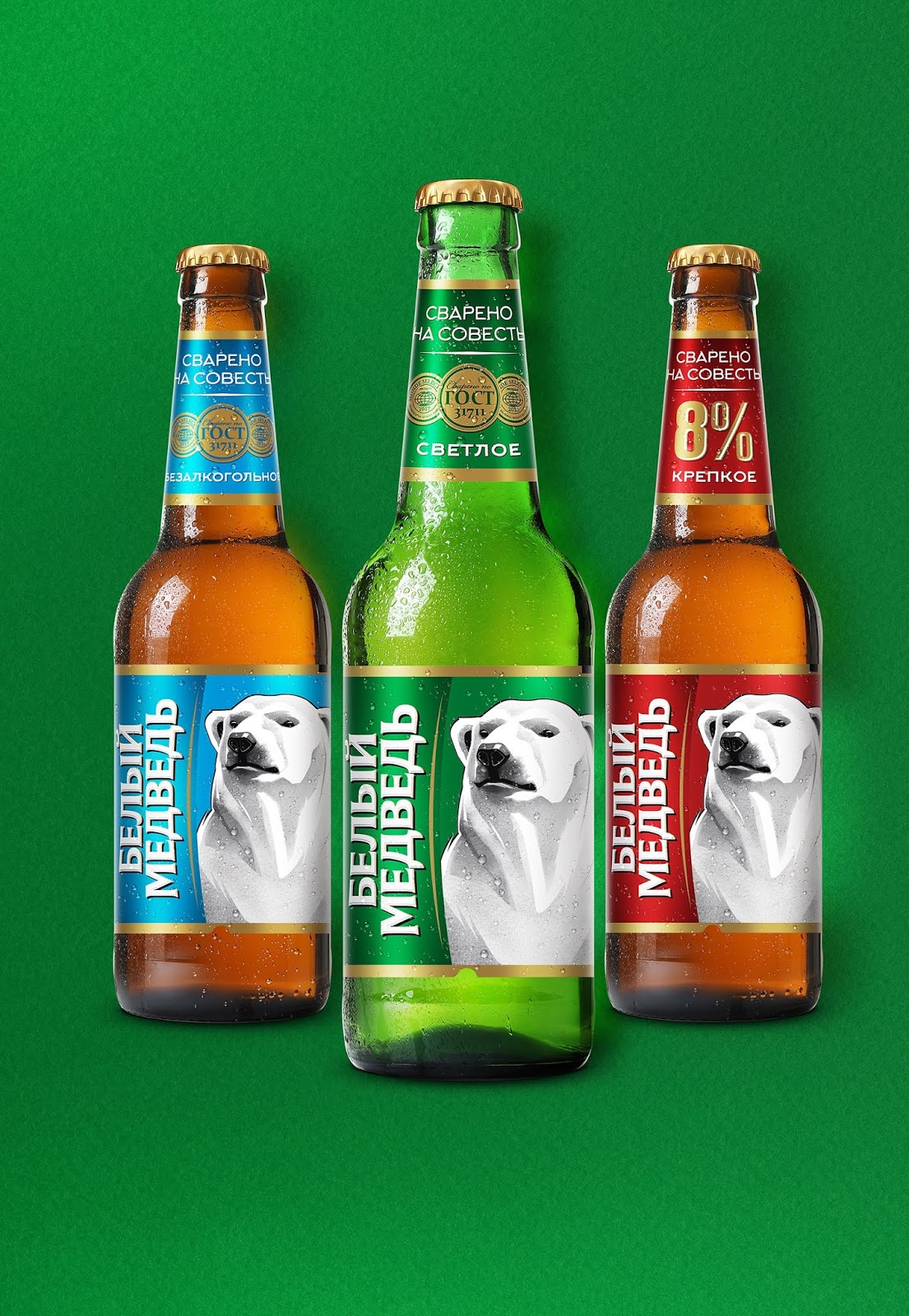 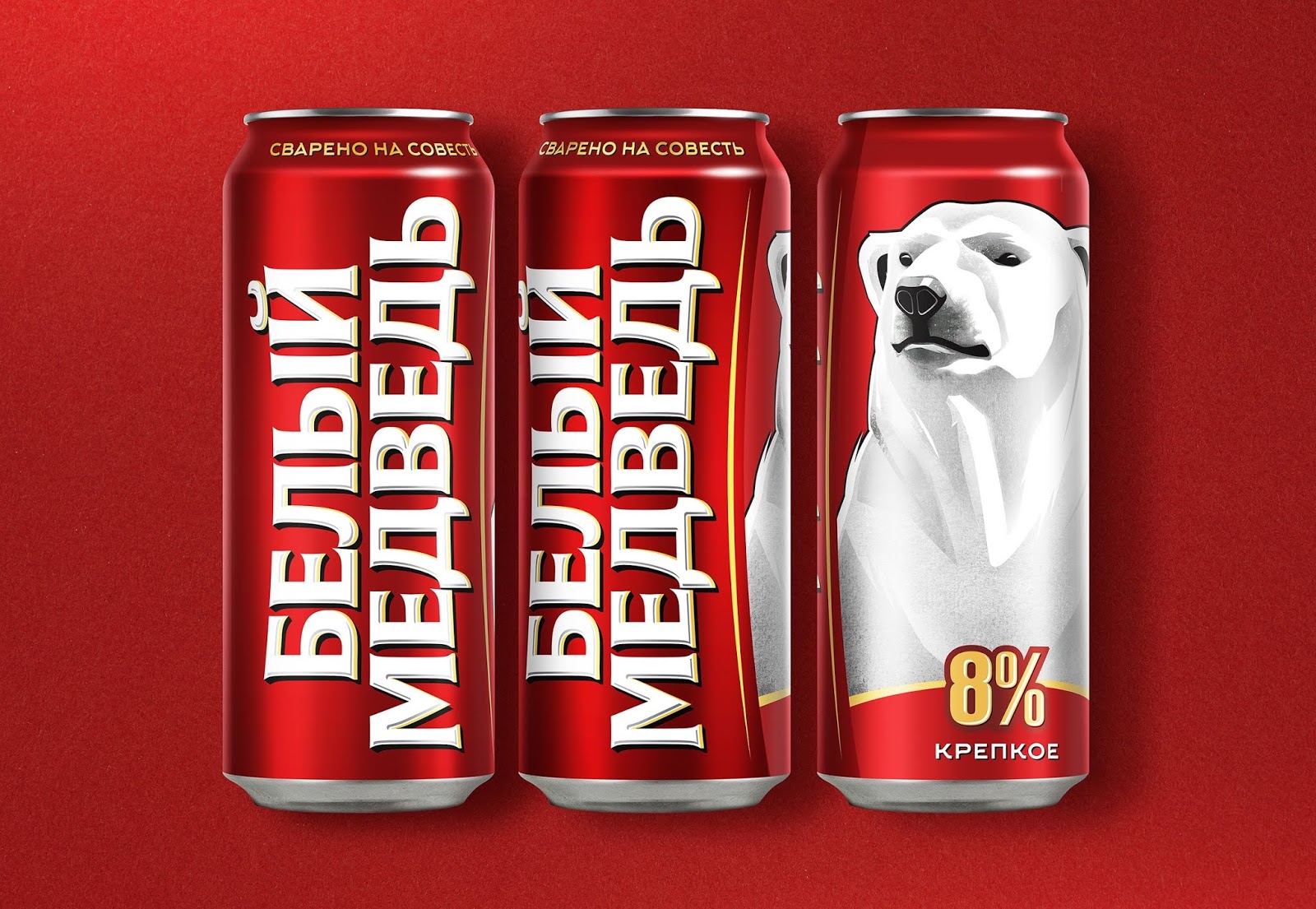 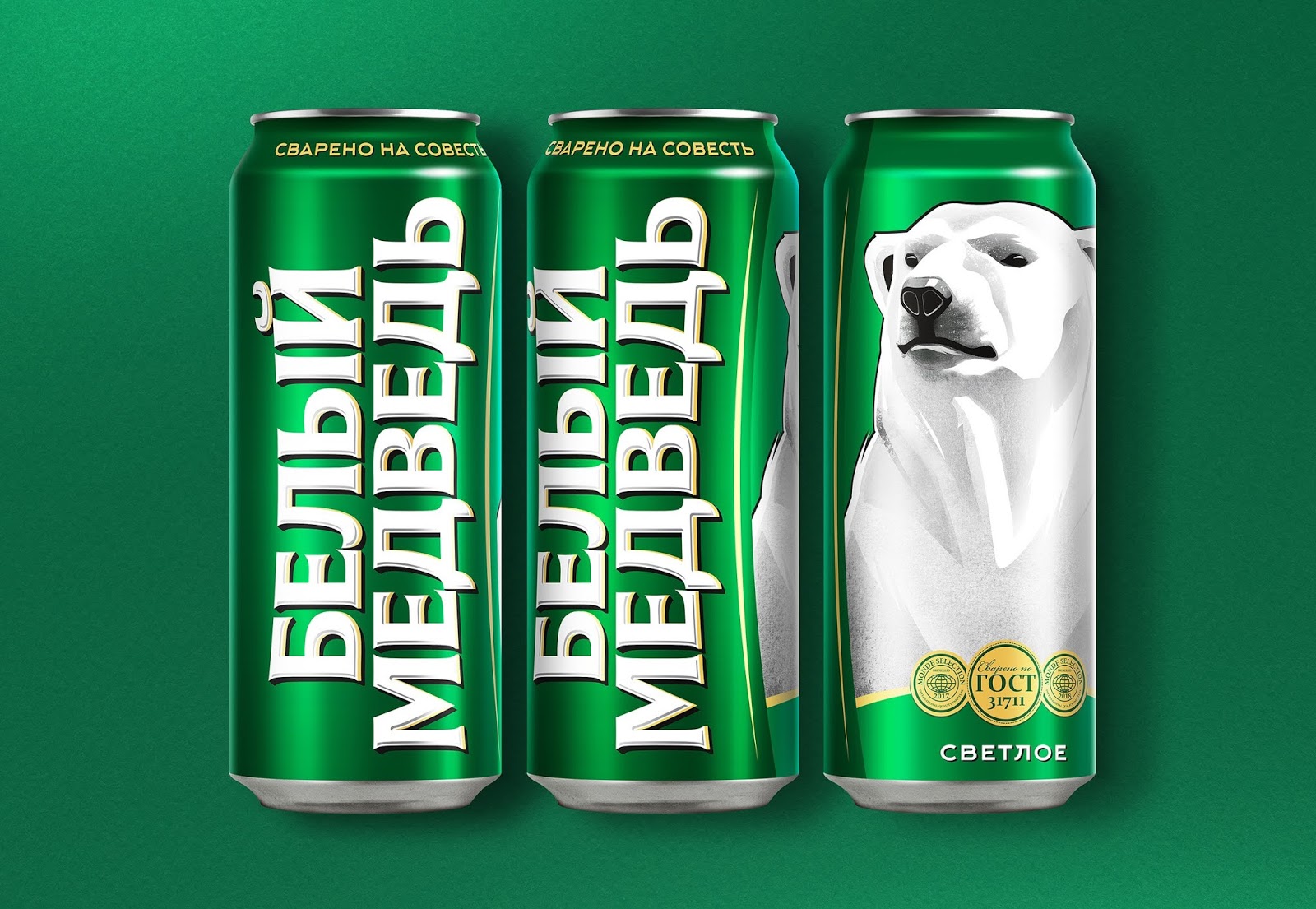 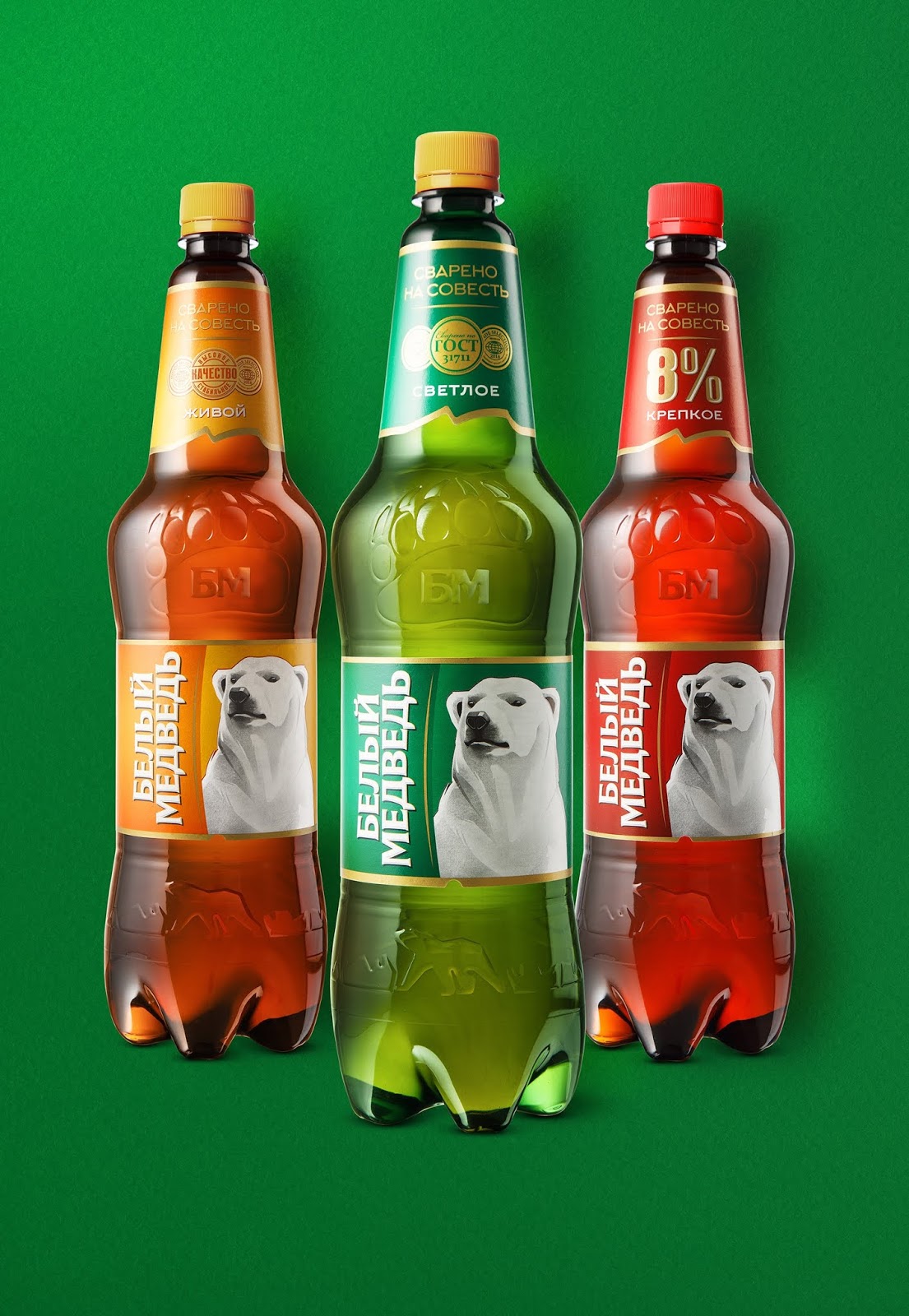