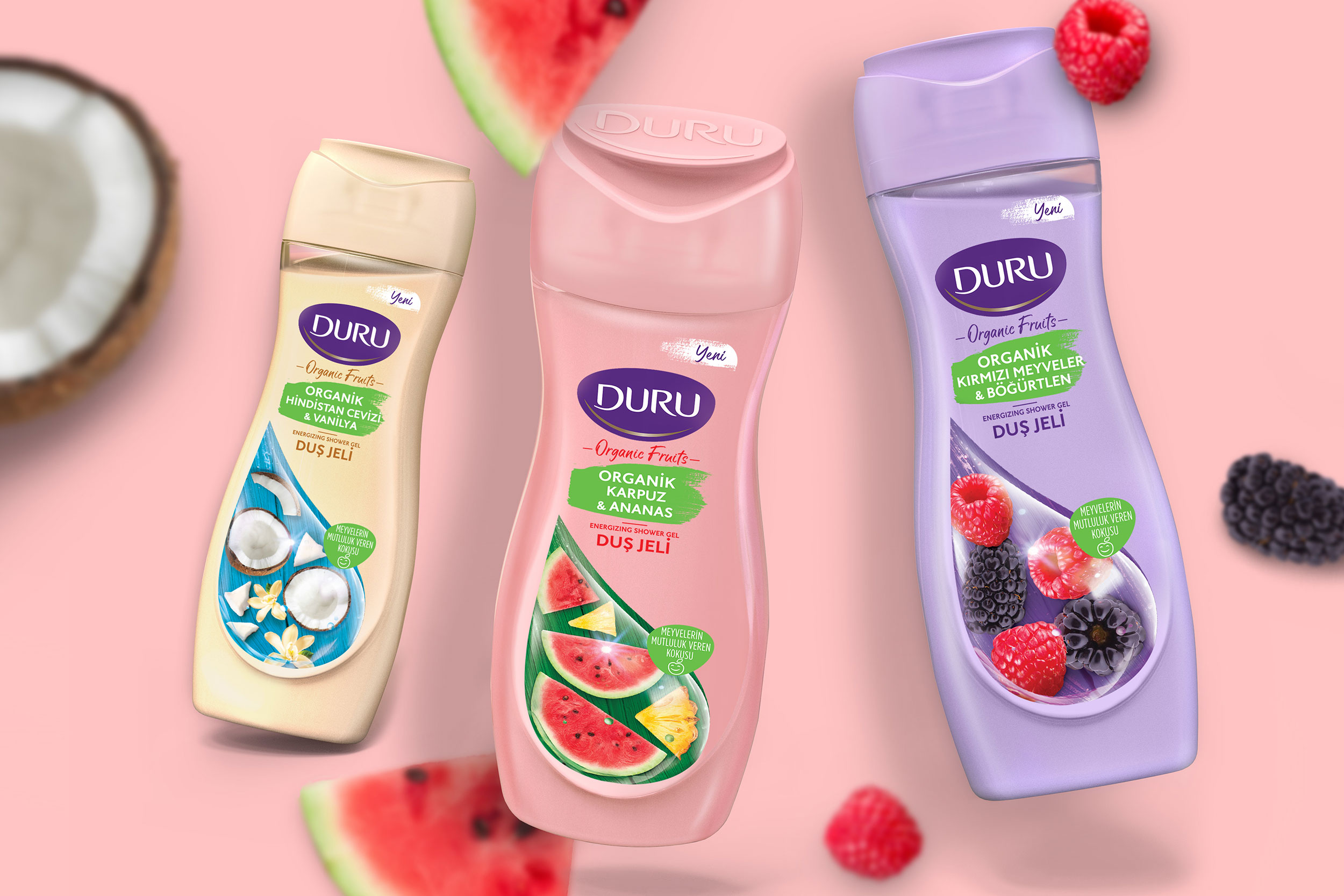 Istanbul based packaging design agency Orhan Irmak Tasarım was asked for a complete make over for Duru Shower Gels. Duru is a strong personal care brand in Turkish, Russian and Middle Eastern markets reaching more than 100 countries worldwide. Among its large personal care portfolio, shower gels required a change not only in its shape but also the label design with a wholistic approach.

The project began with the industrial design of the shower gel bottle and the cap. As the target group is mainly women, a look that has feminine lines was aimed in the form. Thanks to the bottle’s curvy shape, the new design created a form that doesn’t slip out of hand and that is easily gripped as well. The cap design was created in a way that reads as the Duru logo when looked from above and the logo was placed as an embossing. In this way, says Design Director Dr. Orhan Irmak, an authentic detail that the brand can own was created. Along with this, the wide cap design presents an ergonomic solution making it possible to open and close in the shower using only one hand.

A drop image was used at the lower part of the labels, which integrates with the circular form at the bottom of the bottle. The ingredients reflecting the scent of the shower gels were visualized in this drop form with a flat design approach. The expanding upper part of the bottle on the other hand, is reserved for the logo. Transparent label allowed the color of the product to be seen clearly on the shelf. With this project, which takes a holistic approach to packaging design and produces a 360-degree solution for the needs of the brand, Duru Shower Gels achieved a much more modern look and attractive visual language.

Established in 2004, Orhan Irmak Tasarım is the leading branding and packaging design agency in Turkey. To date, Orhan Irmak Tasarim has received nearly 100 awards in national and international design competitions on packaging design including Red dot, Pentawards, WorldStar and Design Turkey. The agency is a member of GLBA – Global Local Branding Alliance. In addition to its Istanbul office, GLBA also has offices in New York, Berlin, Shanghai, Moscow, Sao Paulo and Johannesburg. 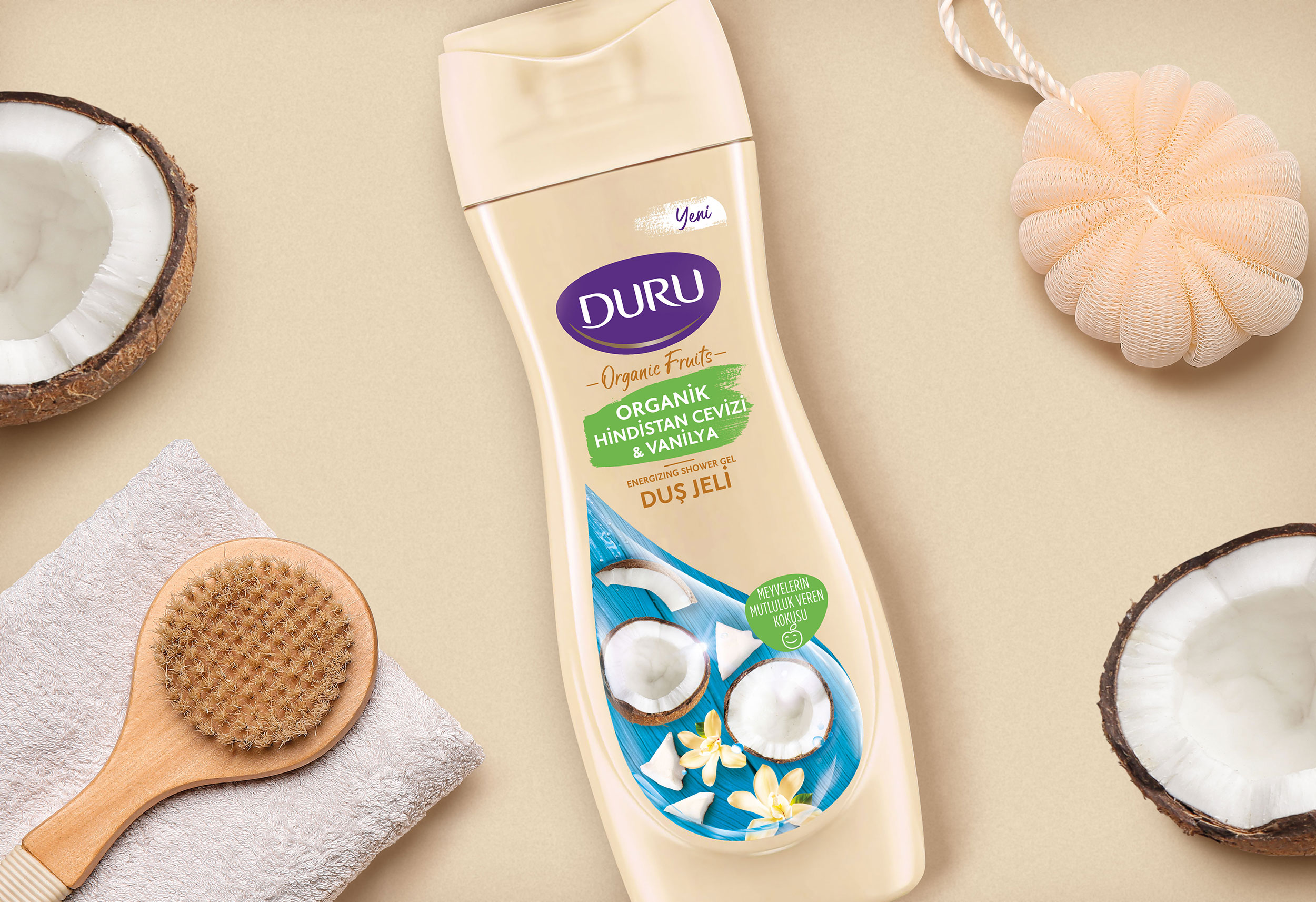 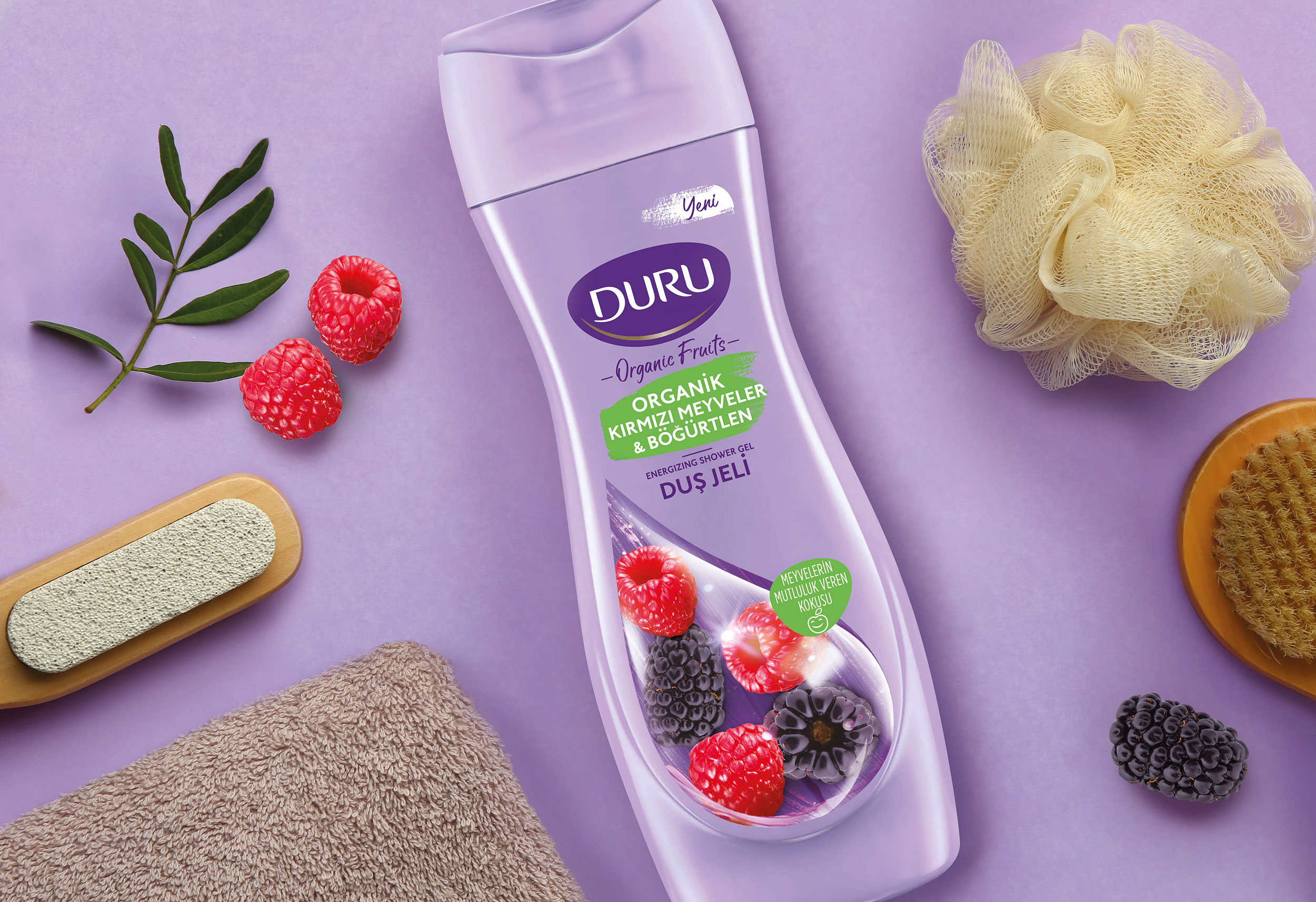 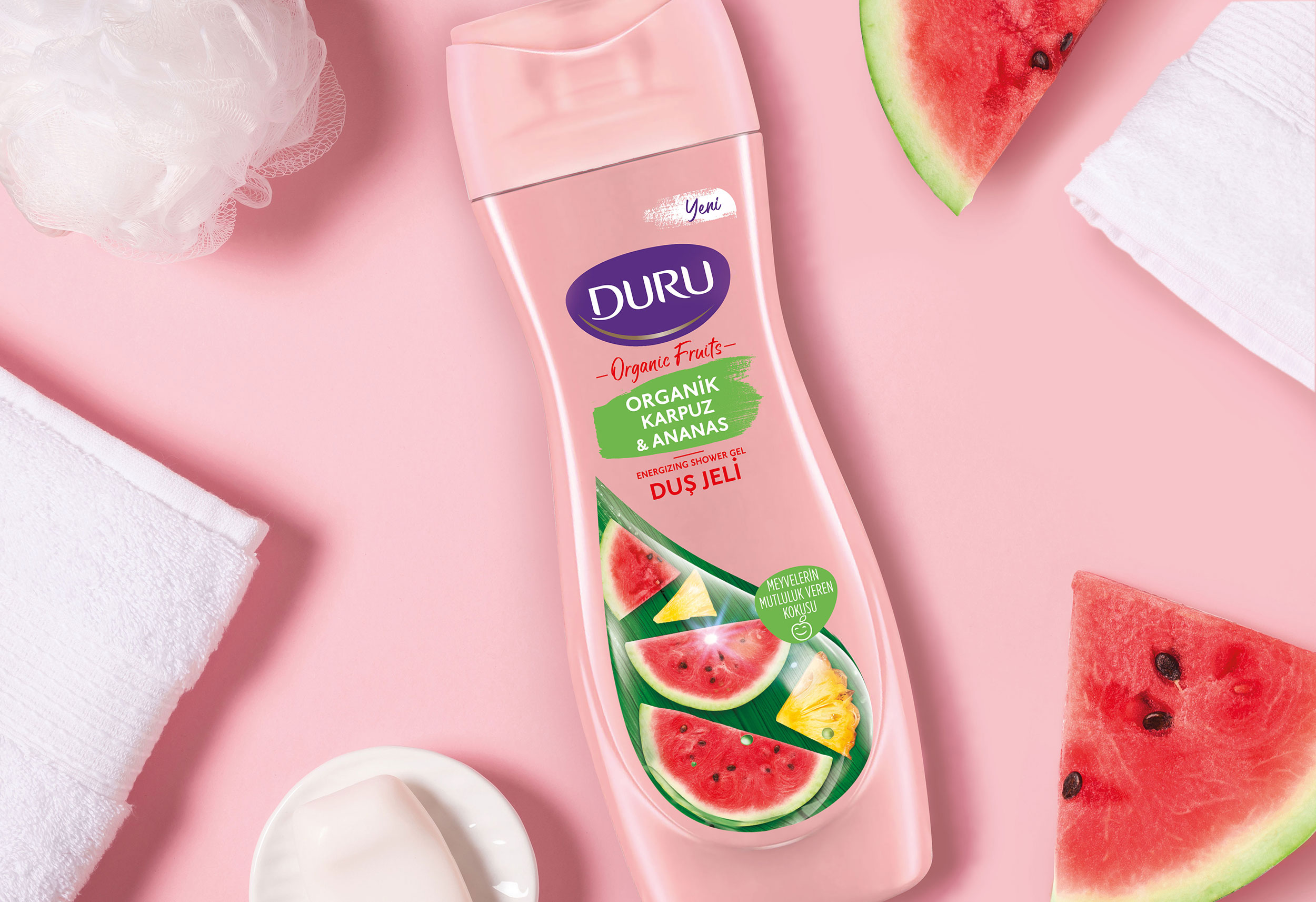 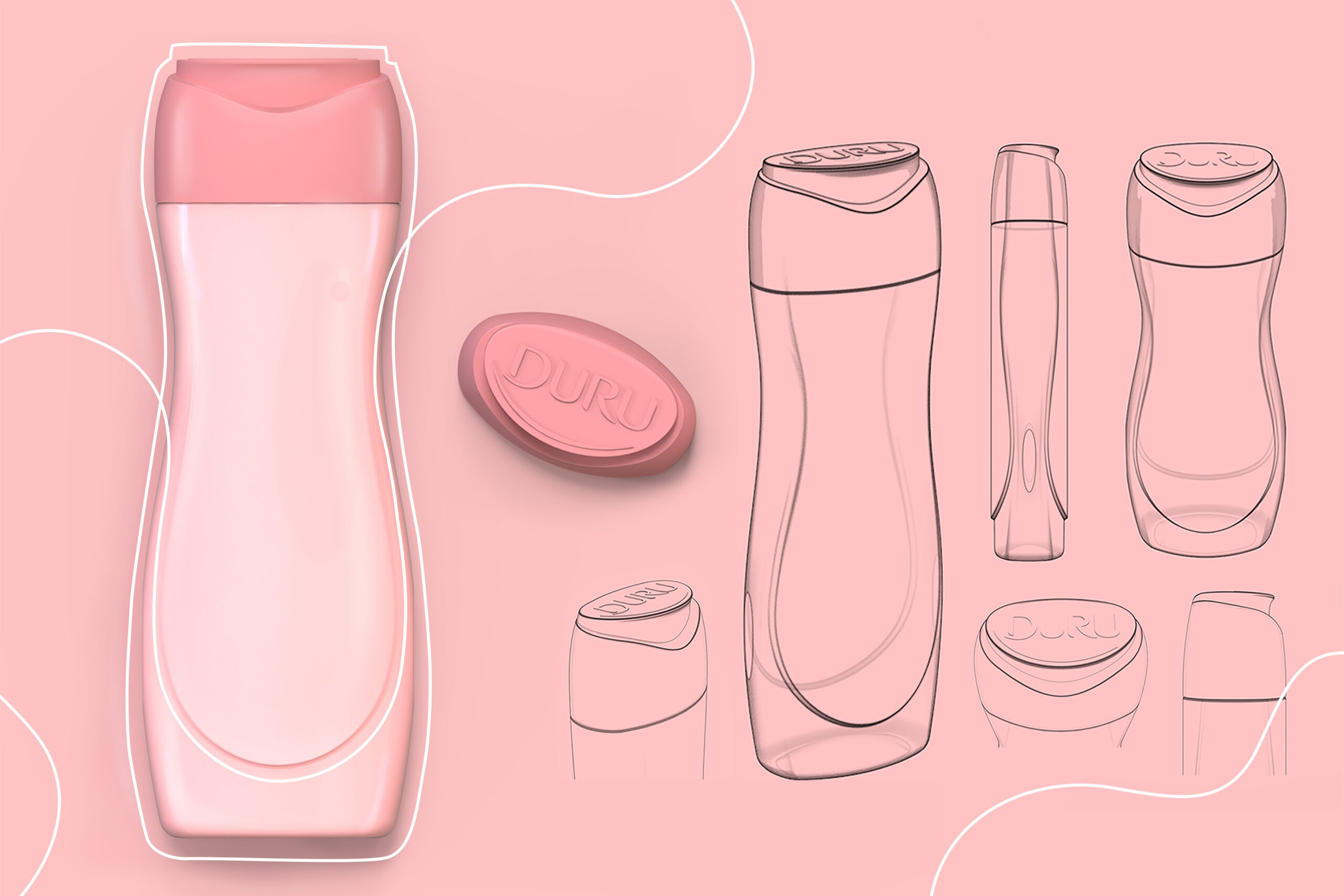