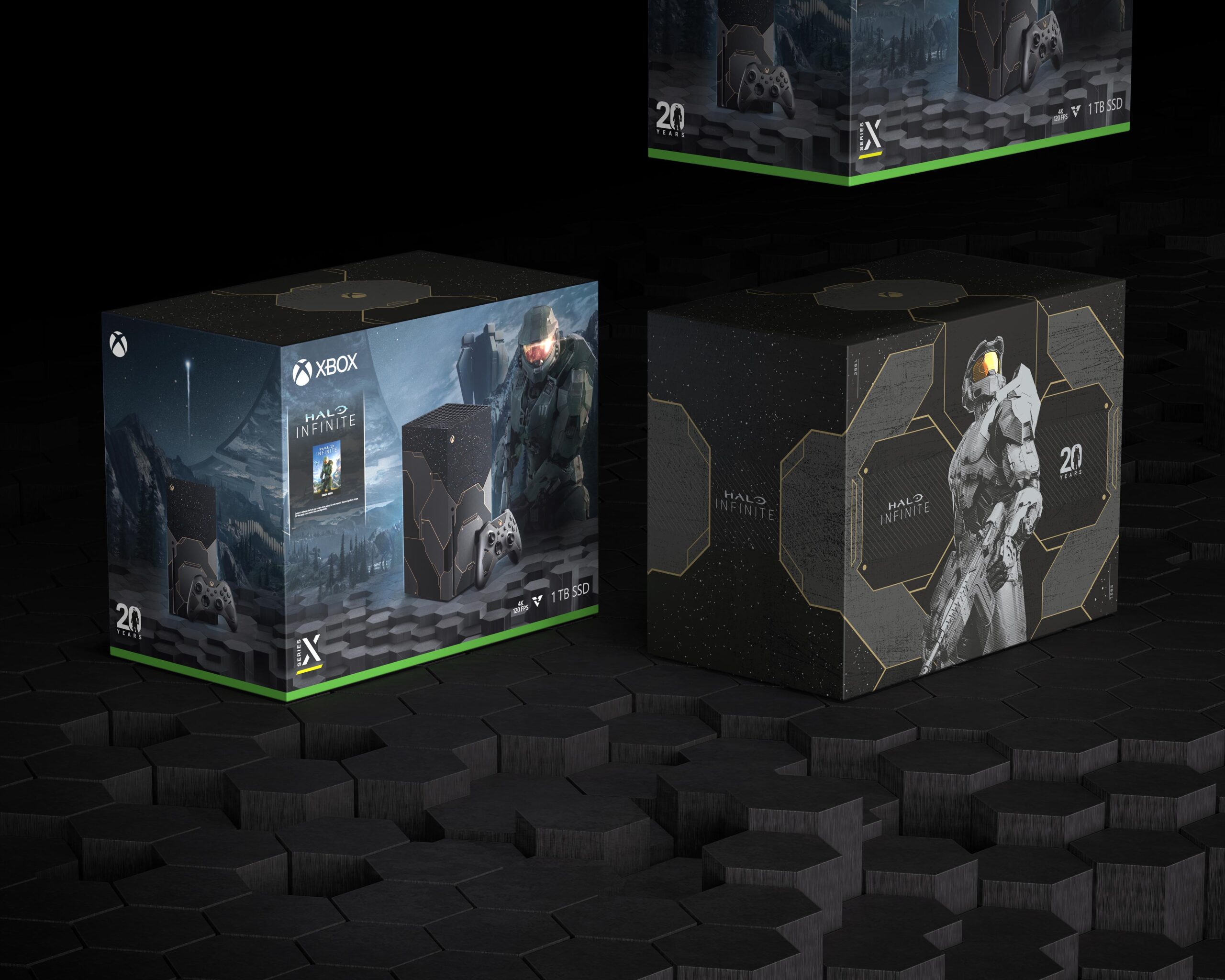 As the primary render and packaging design partner for Xbox, Ten Gun Design’s mission is more than just wireframes and dielines.

Instead, we pride ourselves most on the creation of experiences that gamers will never forget; on connecting deeper to their favorite worlds so that its packaging isn’t an afterthought—but a trophy.

In other words, we build love.

No franchise is more synonymous with Xbox—or arguably, in a larger sense, modern gaming—than Halo.

In an ever-quickening gaming industry, success and popularity with such depth is difficult to not only accomplish in the first place, but also sustain. So when our client, Xbox, marked the 20th anniversary of Halo, it was certainly an occasion worth celebrating.

2021 was a busy year for both Xbox and Halo, 20th anniversary or not. Fresh off the heels of launching the Xbox Series X and Series S in late 2020, Xbox designed a special edition version of the Series X to drive excitement even further for the latest entry in the Halo series, Halo Infinite.

For Ten Gun, the task focused on how best to deliver this experience to gamers. How could the product packaging for this momentous console extend beyond being just a protective box to being a decorative trophy?

How could we make the memory of unboxing the Xbox Series X Halo Infinite Limited Edition Bundle truly live… infinitely?

Oftentimes, especially in gaming, physical packaging is just an extra step between buying and experiencing a product for the first time.

And for gamers, whose purchasing options have evolved dramatically in the last decade, packaging must go above and beyond to not only elevate the unboxing experience, but also to give them a reason to buy a specific physical product at all.

This limited edition Xbox Series X was designed by Xbox to feature a sleek and elegant representation of the Halo universe. Metallic plating, gold accents, and a universe of stars came together in a design that completely transformed the console.

The design was revolutionary, the game was extraordinary; all that was left to do was create the experience that put it all together.

And, judging by the reaction from gamers worldwide, we did just that.

Our work began by considering all contexts, audiences, and ways to uniquely solve creative challenges. Such a historic limited edition deserved a packaging form factor that could live on the shelves of gamers forever, but frequently the rules of retail mean including an abundance of technical and legal fine print, branding, and clutter.

Knowing this, we utilized a structure that has become a specialty of ours—the underbox. By relying on a box “sleeve” to feature the retail-facing design, we designed an underbox that felt as limited edition as possible, without the crowdedness of external elements. We knew that fans wouldn’t be buying this console for what the packaging looked like at retail, but instead what it could look like sitting in their homes.

The underbox is where this anniversary celebration really started.

Along with replicating the plating and accents of the console itself, the packaging fully highlighted the three most critical pieces of the project: the Halo Infinite logo, the Halo 20th Anniversary lockup, and, of course, a heroically posed Master Chief. Without the traditional retail design necessities, the underbox had an unprecedented amount of breathing room, letting the crucial elements stand proudly and the supporting aesthetic show its true effect.

The metallics and spot varnishes, inspired by the console and fully-realized on the box, had their moment to shine. “Clean” was a recurring comment from many of the fellow unboxers we heard from.

Diving into the underbox itself, no expense was spared to make sure the experience felt premium for our fans. This wasn’t a typical unboxing. The lid of the packaging didn’t just open, it rose. The internal foam was cut not just to protect the console, but to showcase it. The metallic plating didn’t just continue from the box to the console wrap, it lined up perfectly. These weren’t choices that had to be made, especially considering similar packaging in the gaming space, but knowing how important Halo is to so many made these decisions important for us.

Even the smallest details worked hard to elevate the experience further. One of our favorites is found in the wrap for the console itself, where the starry surface was printed onto the foam. Gazing into the opened underbox had the same effect as staring skyward from the surface of Zeta Halo. Such an added detail, with such a disproportionately large effect, has now become a staple of our future design projects.

“Now I gotta save the box. Are you kidding me, Xbox?”
— @SnowBikeMike, YouTuber

Unsurprisingly, the Xbox Series X Halo Infinite Limited Edition Bundle was an instant hit and therefore a rare find in stores. But, in the photos and videos of the gamers who did get their hands on one, we heard plenty of surprised, delighted, and emotional reactions. We turned a historic moment into an unexpected keepsake and, from comparisons to the utilitarian packaging of competitors to the glamour shots of our packaging on shelves, it is an effort we are extraordinarily proud of.

Furthermore, for being the first of our major projects to take place entirely during the pandemic, it tested our processes as well. Virtual calls, staggered trips to the office, and hopeful shipments from printers around the world meant that, once the final product fully came to fruition, it meant so much more.

The Xbox Series X Halo Infinite Limited Edition Bundle was a celebration of Xbox, Halo, and the love shown by a world of passionate gamers. It was one that we were thrilled to be a part of. 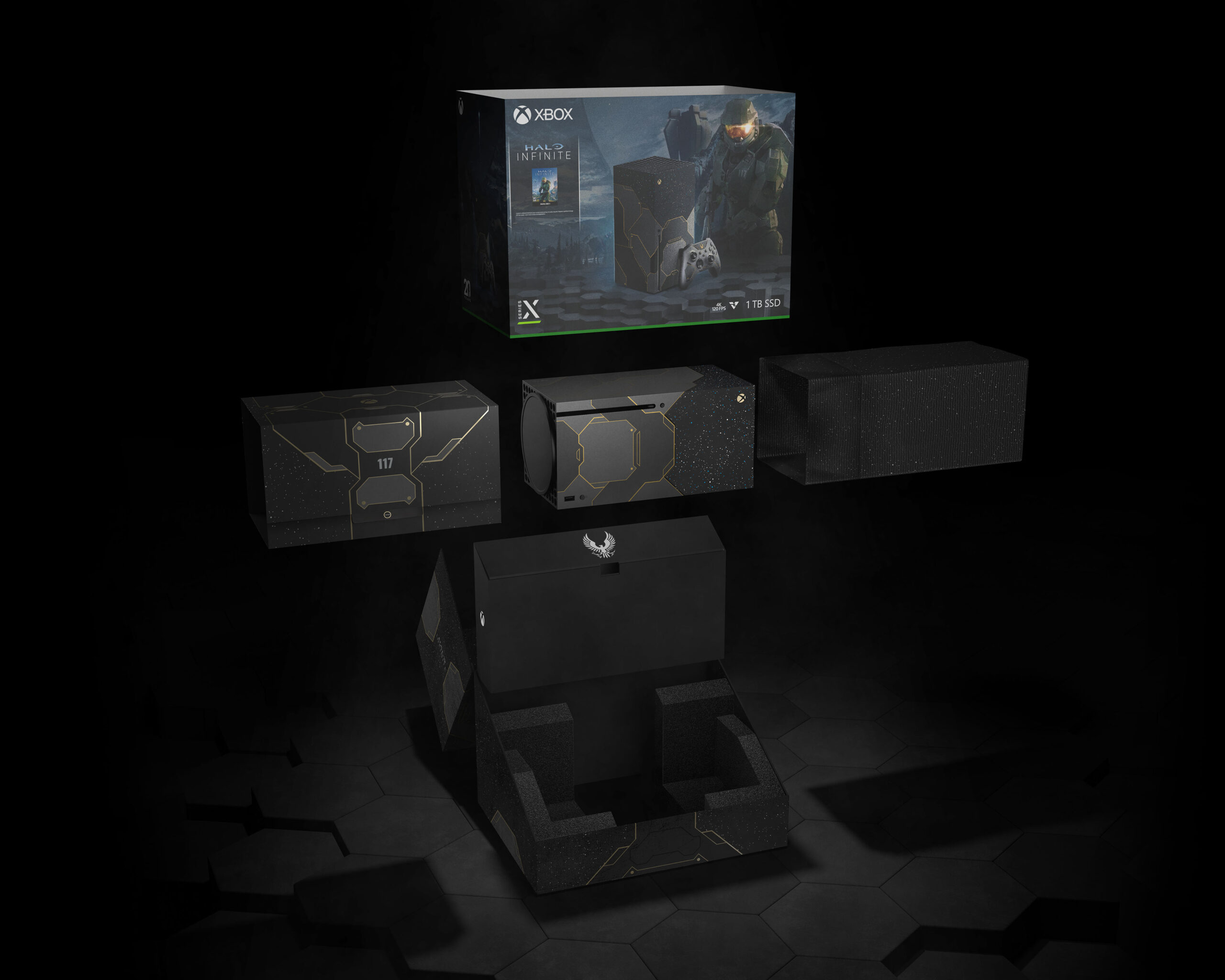 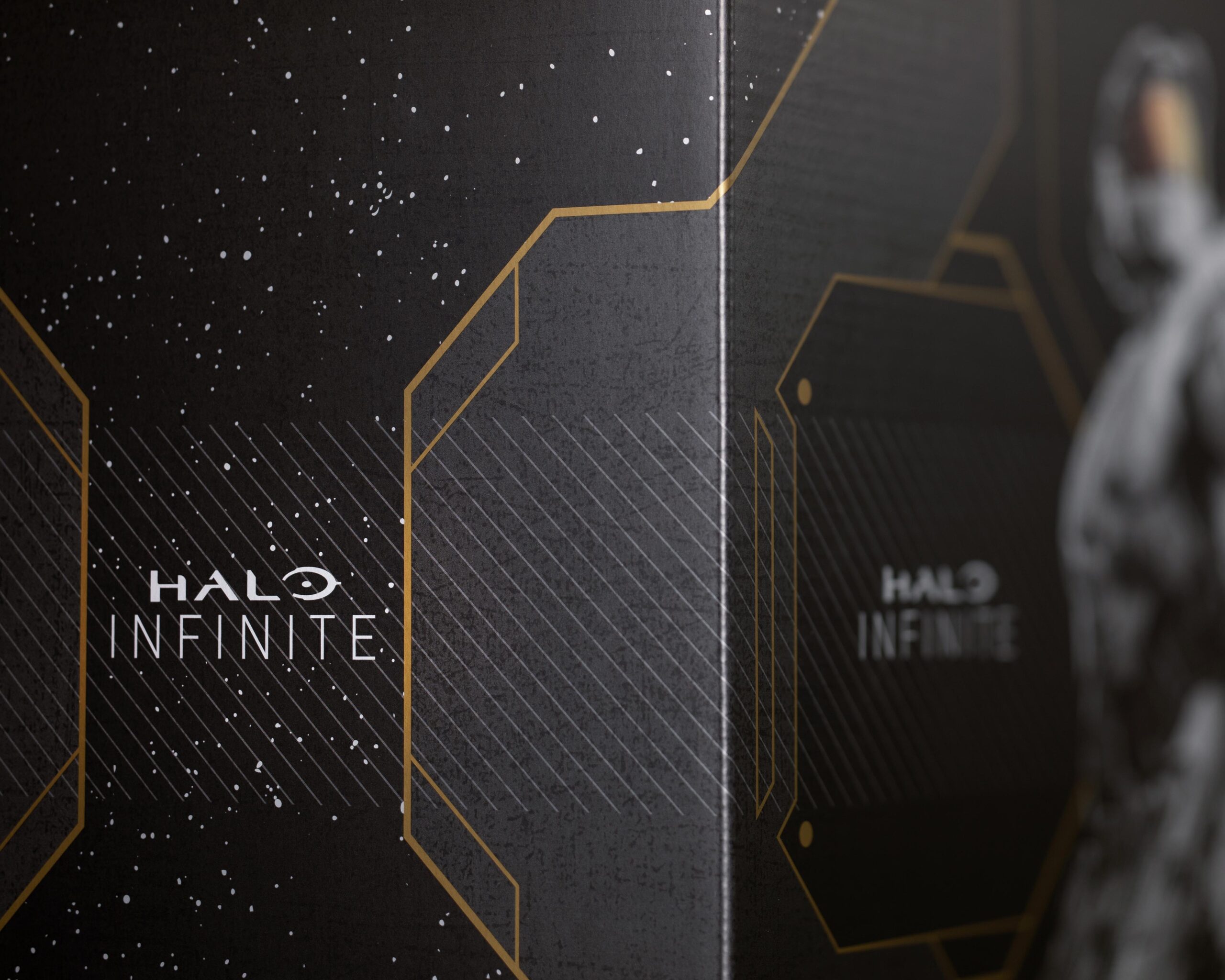 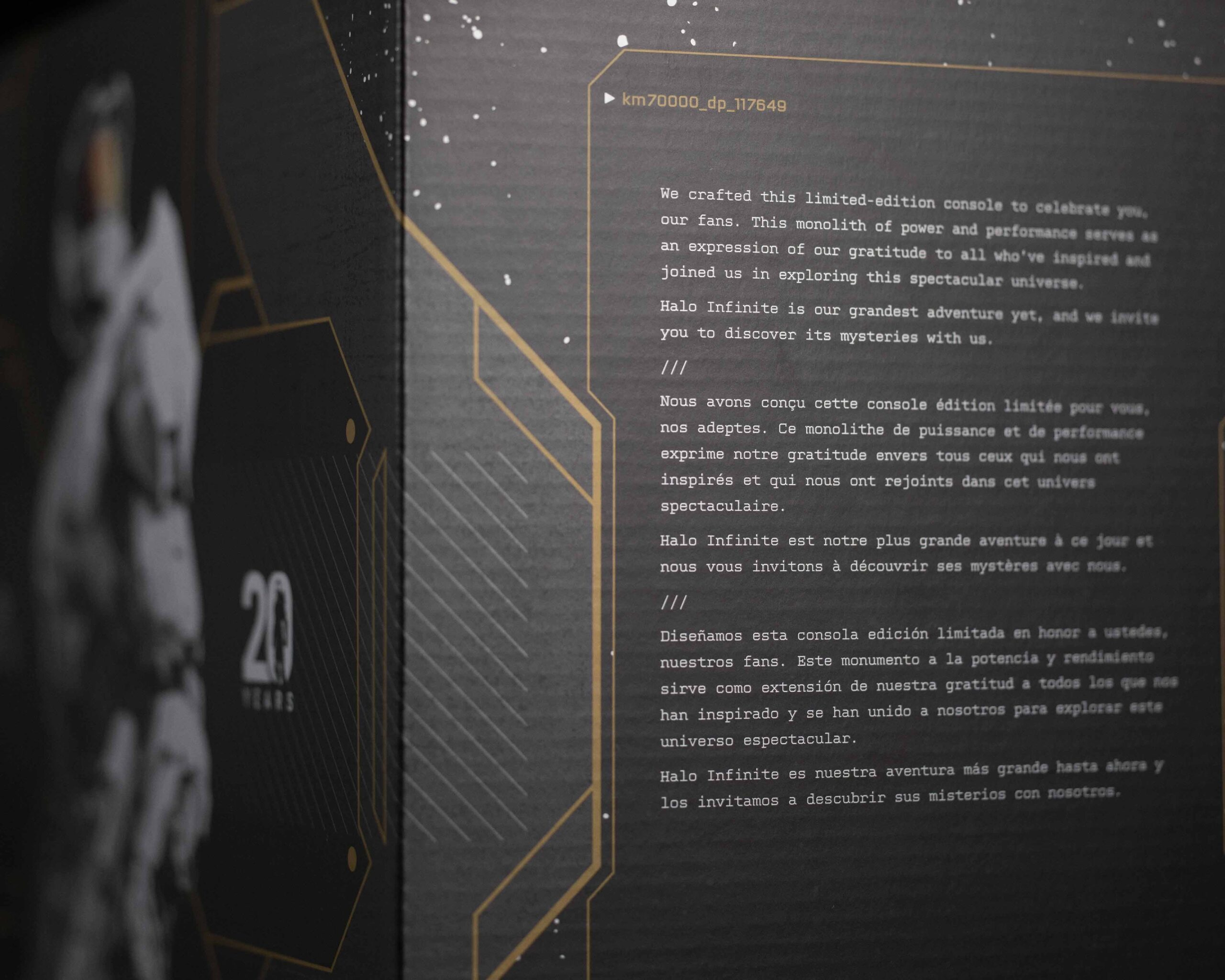 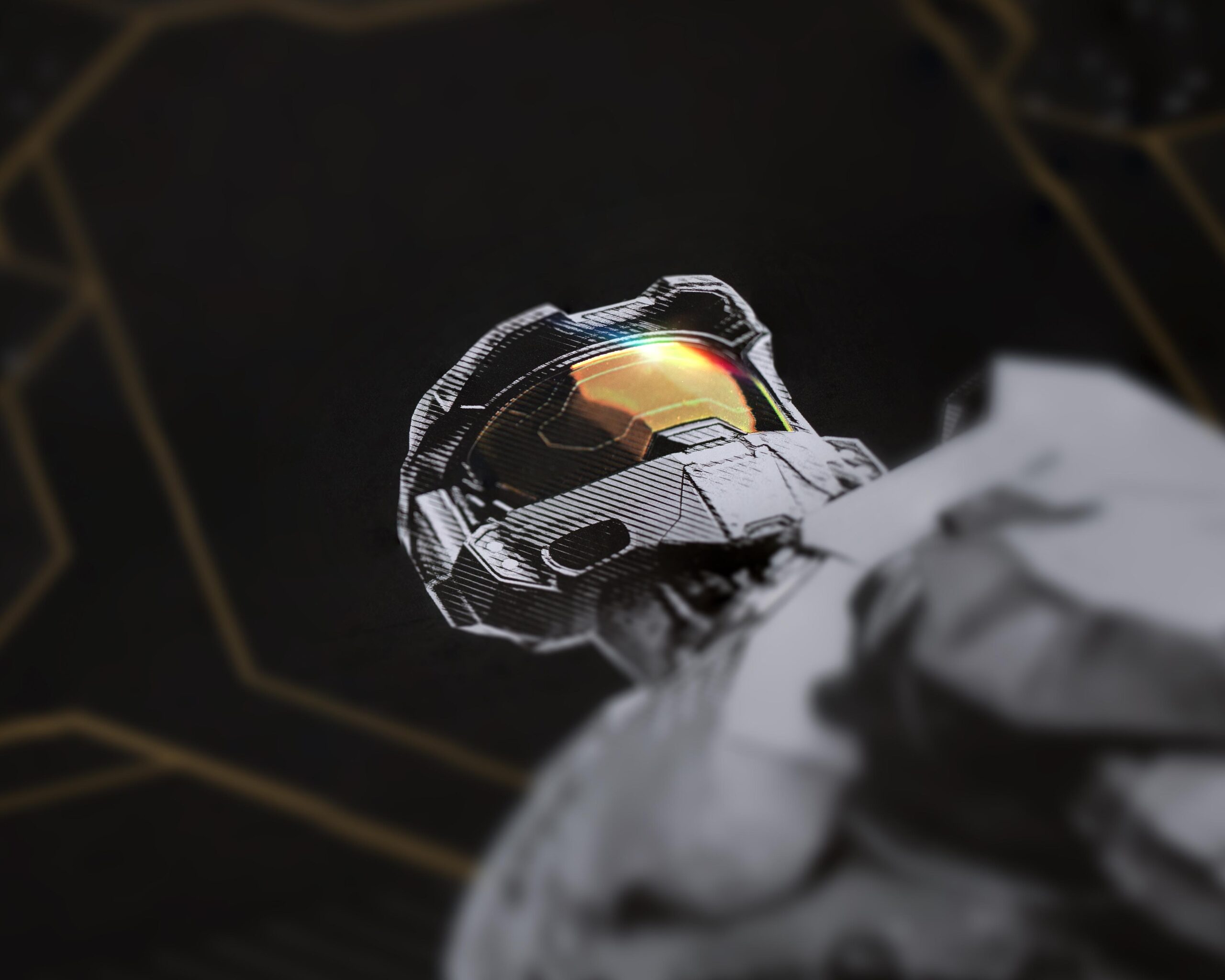 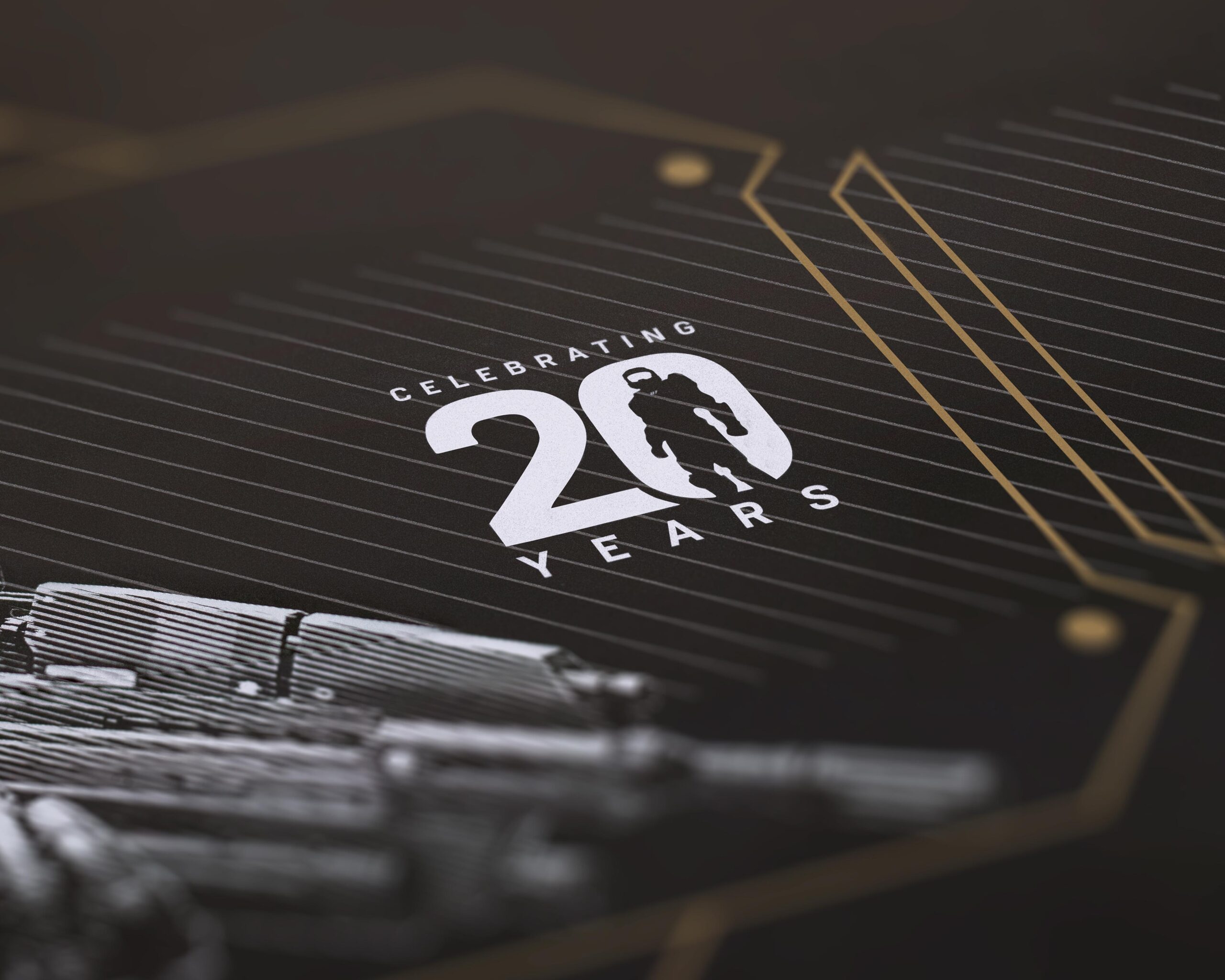 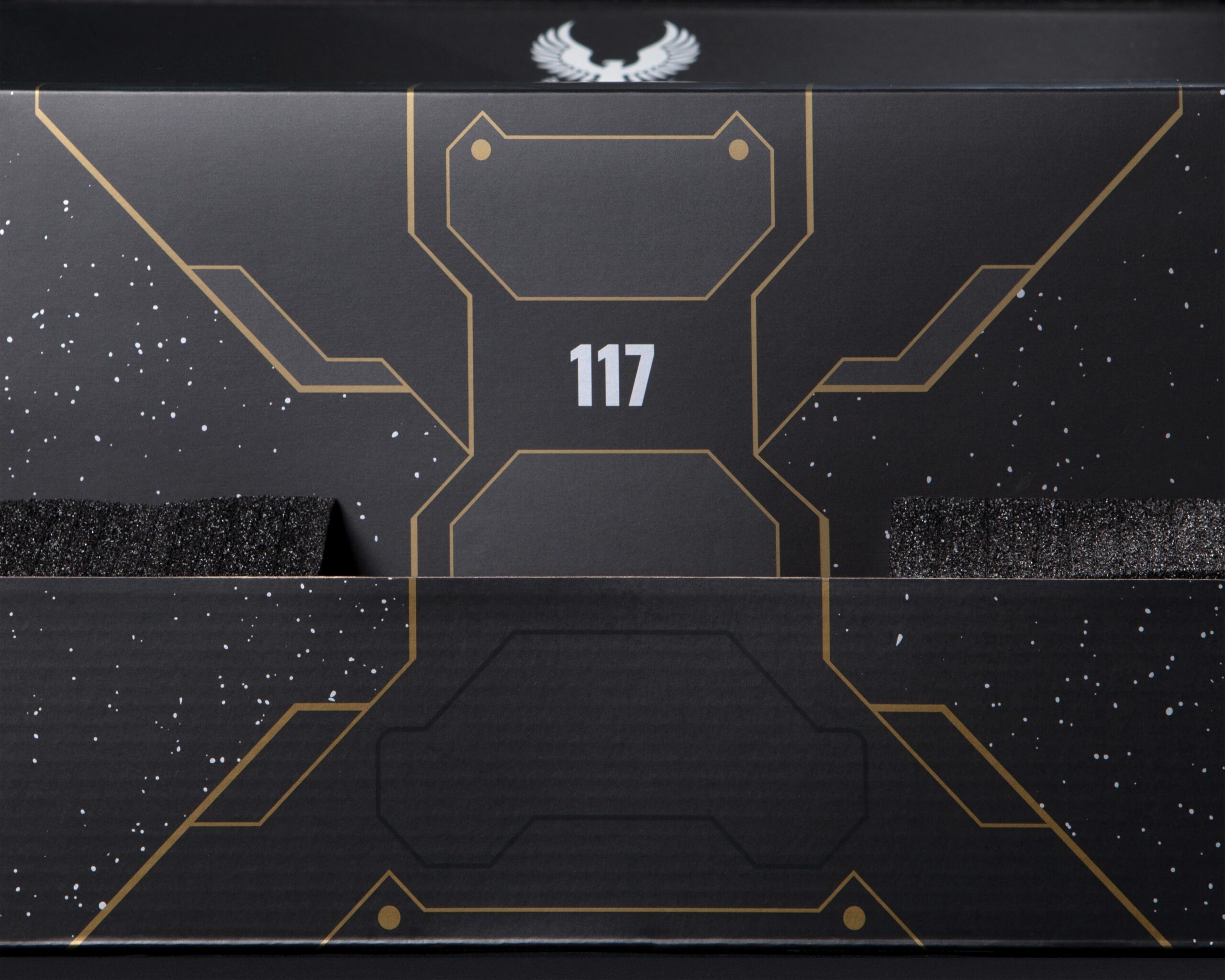 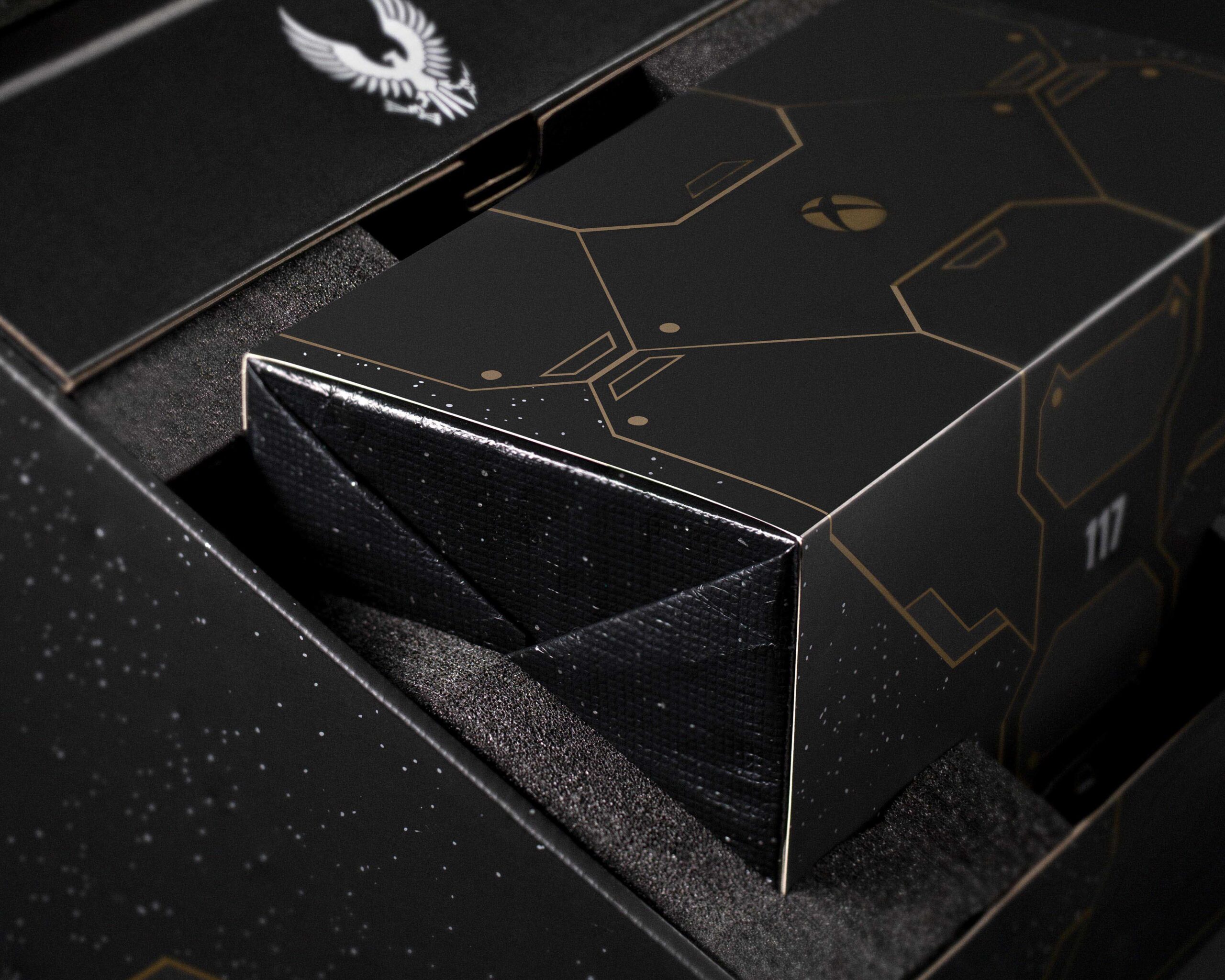 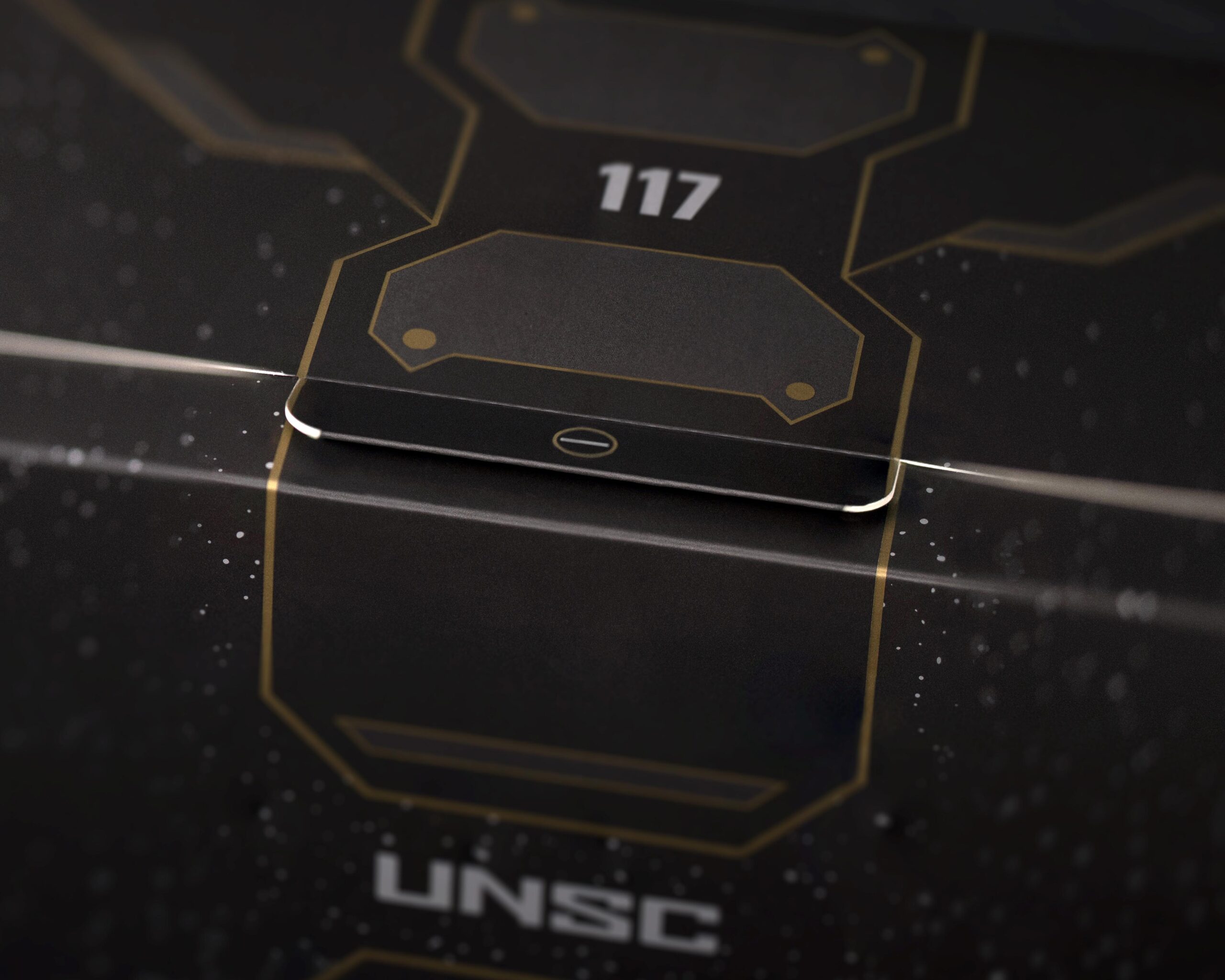 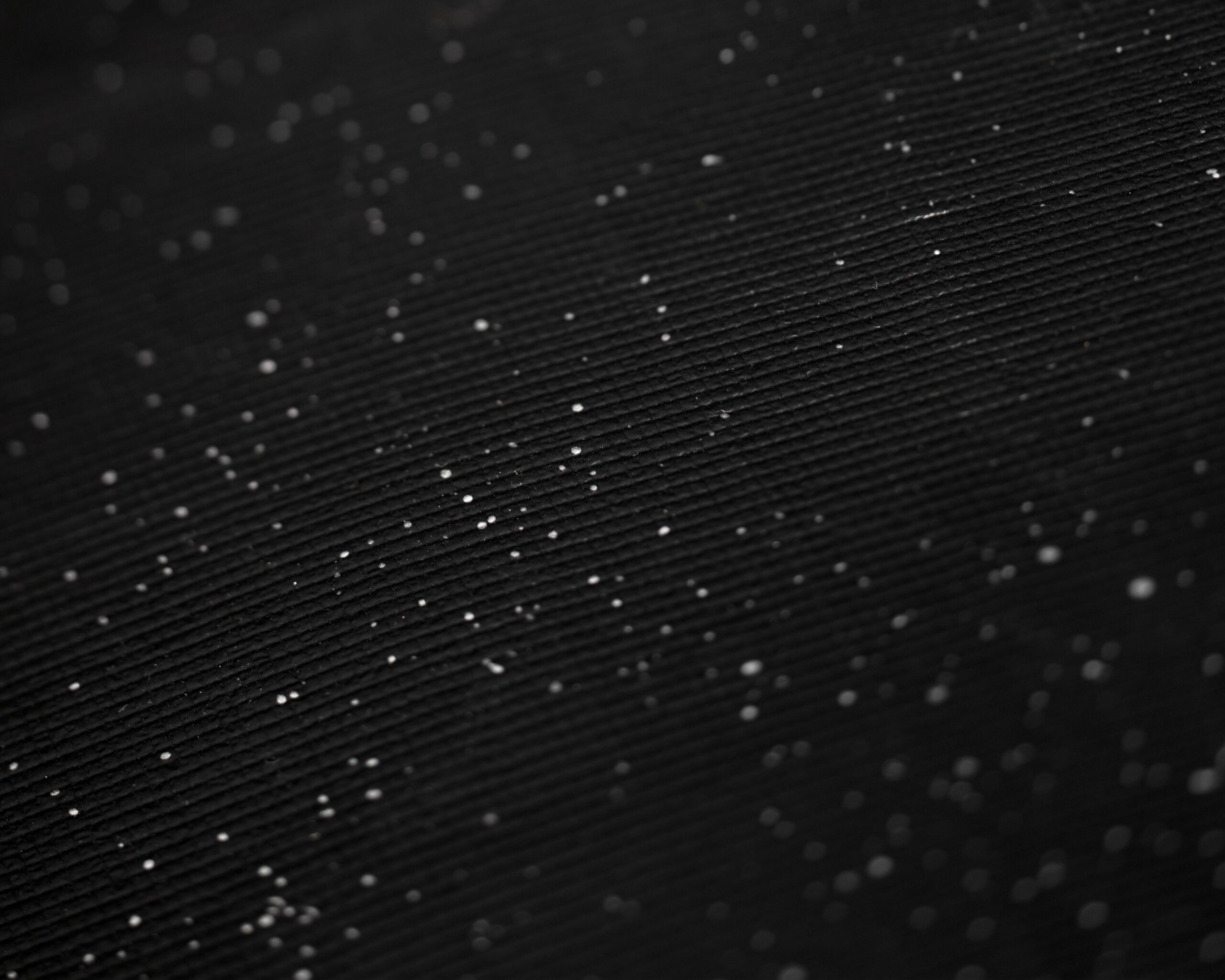 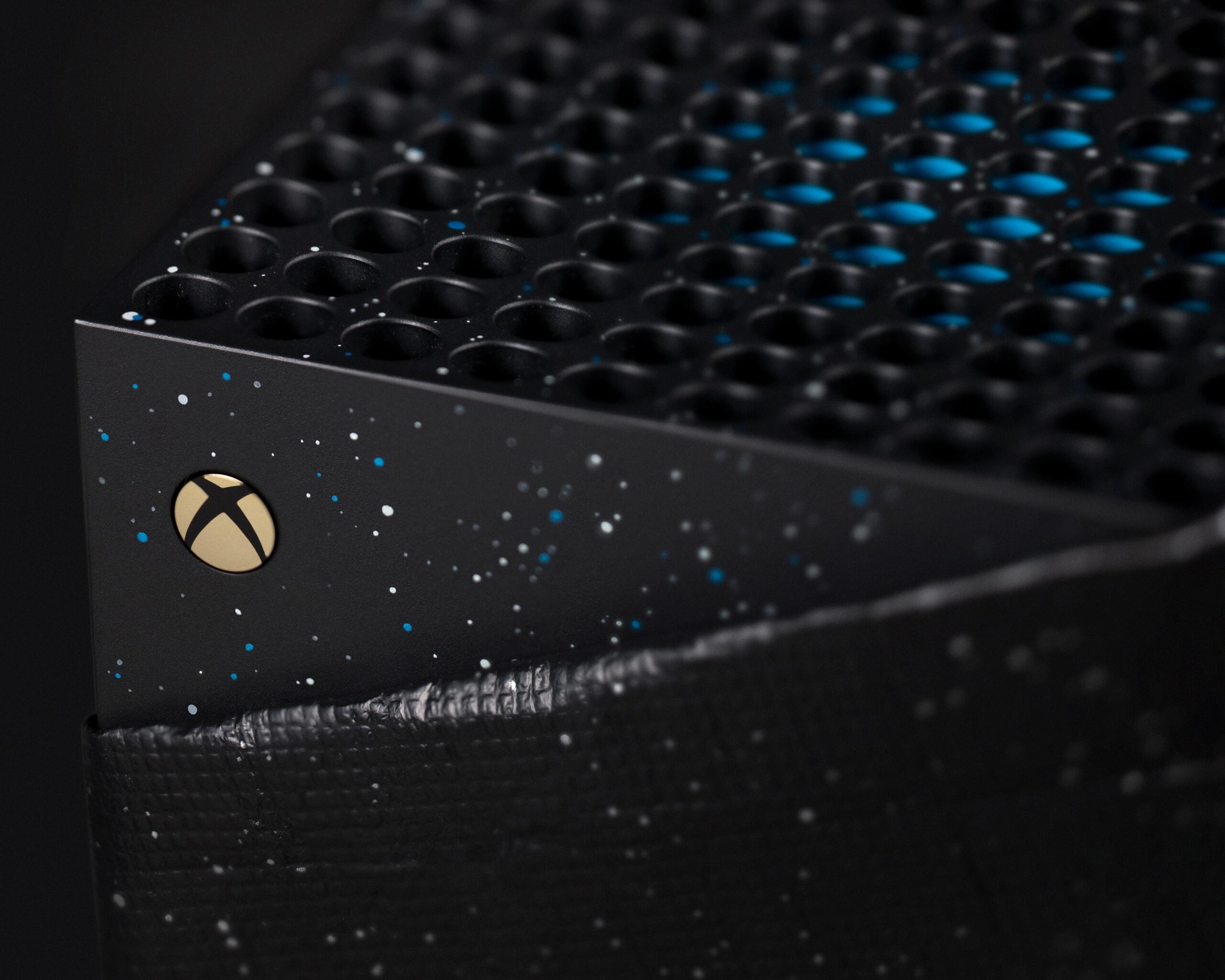