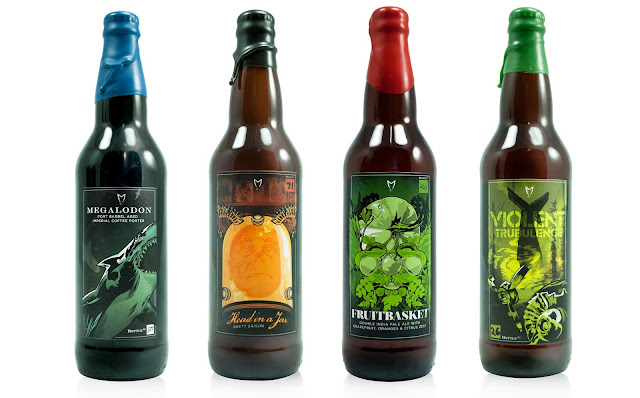 Watermark Design worked in tandem with Champion Brewing Company to release this label series for their taproom. Each whimsical and bizarre illustration has its own distinct narrative to reflect the beer within. The foreground vectorized image contrasts sharply with the organic digital paintings that fall murkily to the background, giving the monochromatic illustrations depth and perspective.

The Unique Points Of The Packaging:
Each 22 ounce bottle was individually labeled, waxed, and numbered with care by hand in the Champion Missile Factory production facility.

Fruitbasket’s concept revolves around the surreal oil paintings by Arcimboldo that depict fruit and organic matter still lifes as a form of portraiture. Fruitbasket is a West Coast Double IPA hopped exclusively with Mosaic hops, with the peel and juices of blood oranges and grapefruits added.

Head in a Jar is based on the theory of solipsism, wherein a disembodied mind could still function outside the body (also known as the Brain in a Vat theory). Head in a Jar is Champion’s Solipsist Saison fermented with Brett. brux. in Afton Mountain Chardonnay barrels.

Megalodon is an Imperial Porter aged in bourbon barrels recently used for port wine, named for the locally-sourced coffee from Shark Mountain (Charlottesville, Virginia) it was brewed with.

Named after the layer of sediment that settles to the bottom of a container after fermentation (trub), Violent Trubulence is an American Triple IPA boasting a gigantic 100 IBU that is not for the faint of palate.

Wine at the Beach