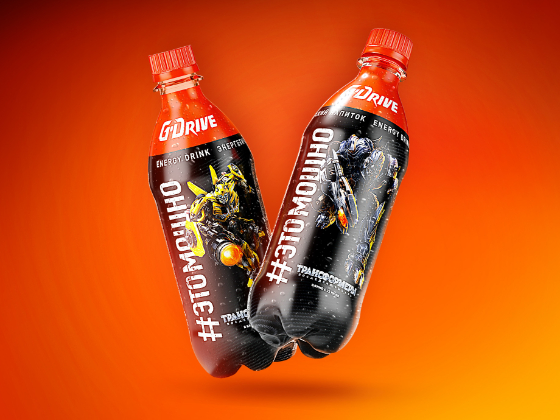 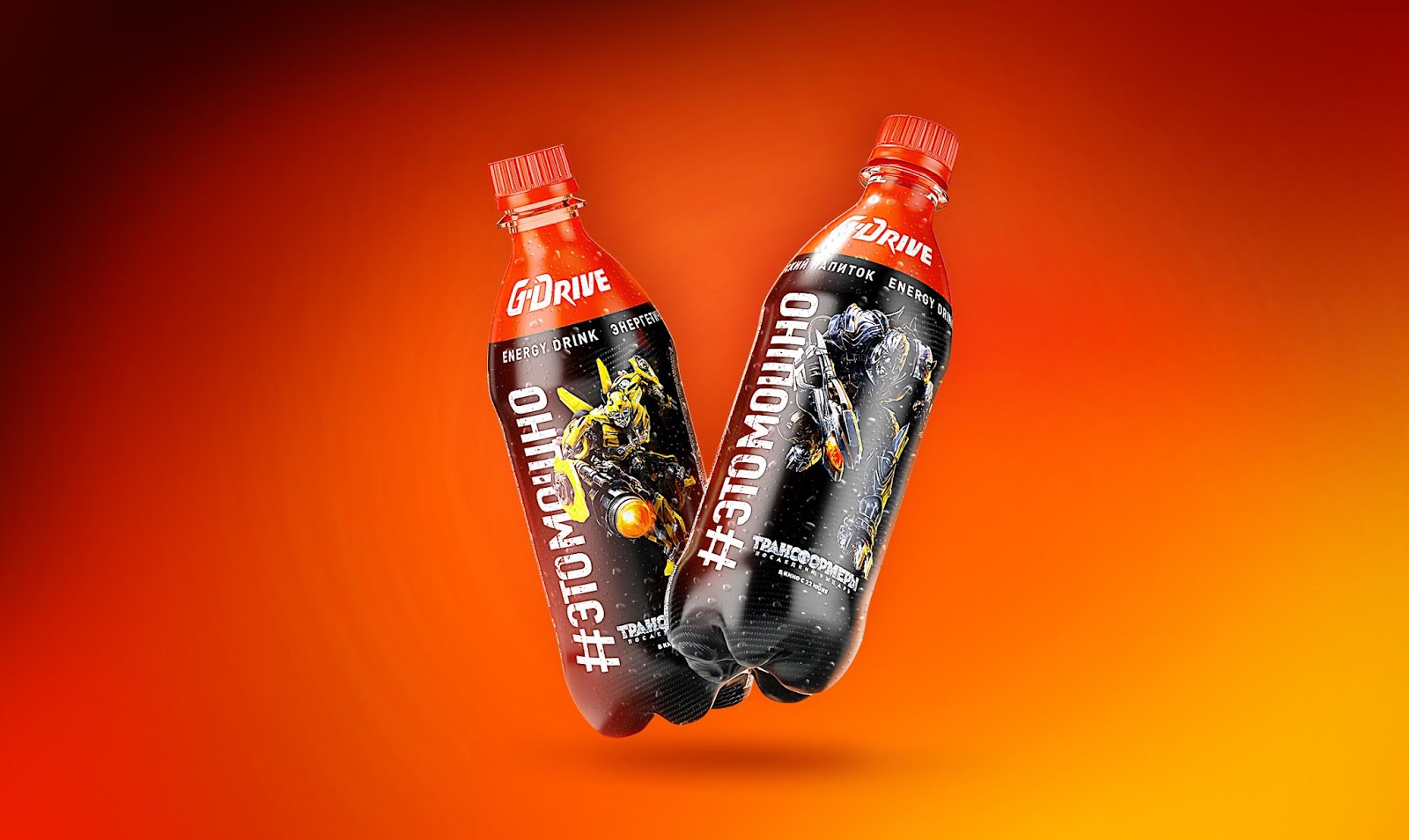 June 22, 2017 in Russia, premiered, already loved by Russian viewers, the American blockbuster “Transformers: The Last Knight”. The fact that the rental of this film in Russian cinemas will be successful, no one doubted. The pre-premiere promo campaign began long before the event itself and was vivid and large-scale. In support of the film, a lot of POS-materials were released: from billboards of the most diverse formats, to a lot of branded souvenirs and consumer products.

The company Gazpromneft acted as a partner of the show “Transformers: The Last Knight” and together with the film company “Central Partnership” held a co-branding action of its brand G-Drive. The main goal of this action was the use of joint positioning for the successful promotion of both products – indeed, the film best reflects the philosophy of the G-Drive brand – giving each car unrivaled power leading to victory.

The main object of branding became energy drinks G-Drive. These energy companies have long gone beyond the retail outlets at Gazpromneft gas stations and they are drunk not only by drivers on a long journey – the most ordinary people, far from the helm, chose the benefits of G-Drive.

To solve this interesting and responsible task was entrusted to experts of the company Clёver Branding. Designers of our agency are also great fans of Michael Bay’s creativity, so work on the new label of energy drink G-Drive was very enthusiastic. The label had to look really powerful. To do this, it was decided to get rid of small details and a blurry background. Against the background of deep black space, the characters of the film fulfill their combat mission. They have no time to stop to pose for the audience: they are in the dynamic, in the impetuous movement forward to victory. And a large hashtag #ЭТОМОЩНО (eng. It’s Powerfull), placed vertically, enhances this effect. In this label, the characters of the film, charged with G-Drive energy, are successfully used, which ultimately brings a synergistic effect for both products.

Bottles with energy G-Drive went on sale during the film in Russia and did not go unnoticed among the Russians, which brought additional profits to Gazpromneft. The film company “Central Partnership” also received direct benefit from such cooperation. The world film rental was more than triumphant: with a budget of 217 million dollars, the fees amounted to more than 605 million dollars. And experts from Clёver Branding are very pleased that, thanks to their work for G-Drive, they can share this bright success. 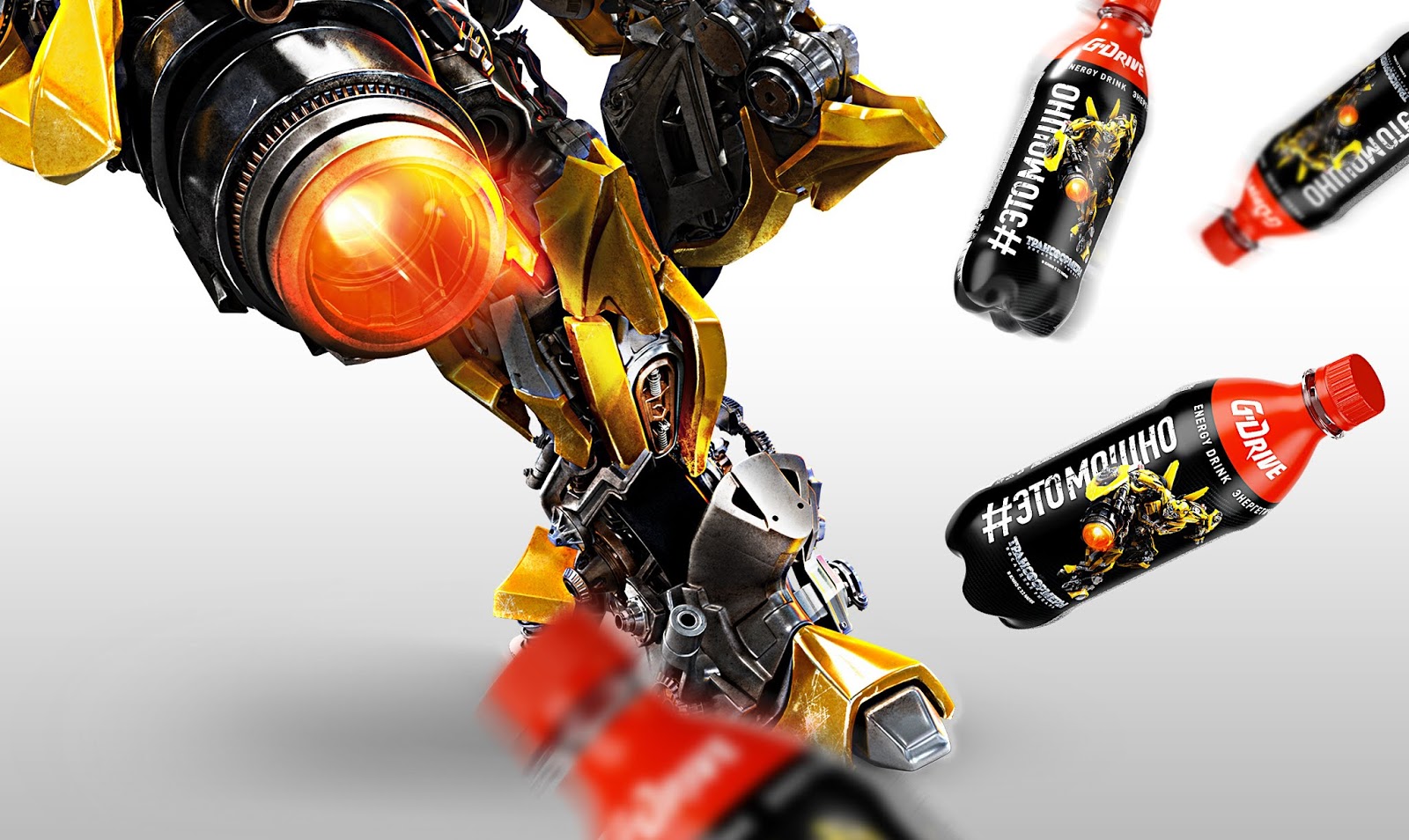 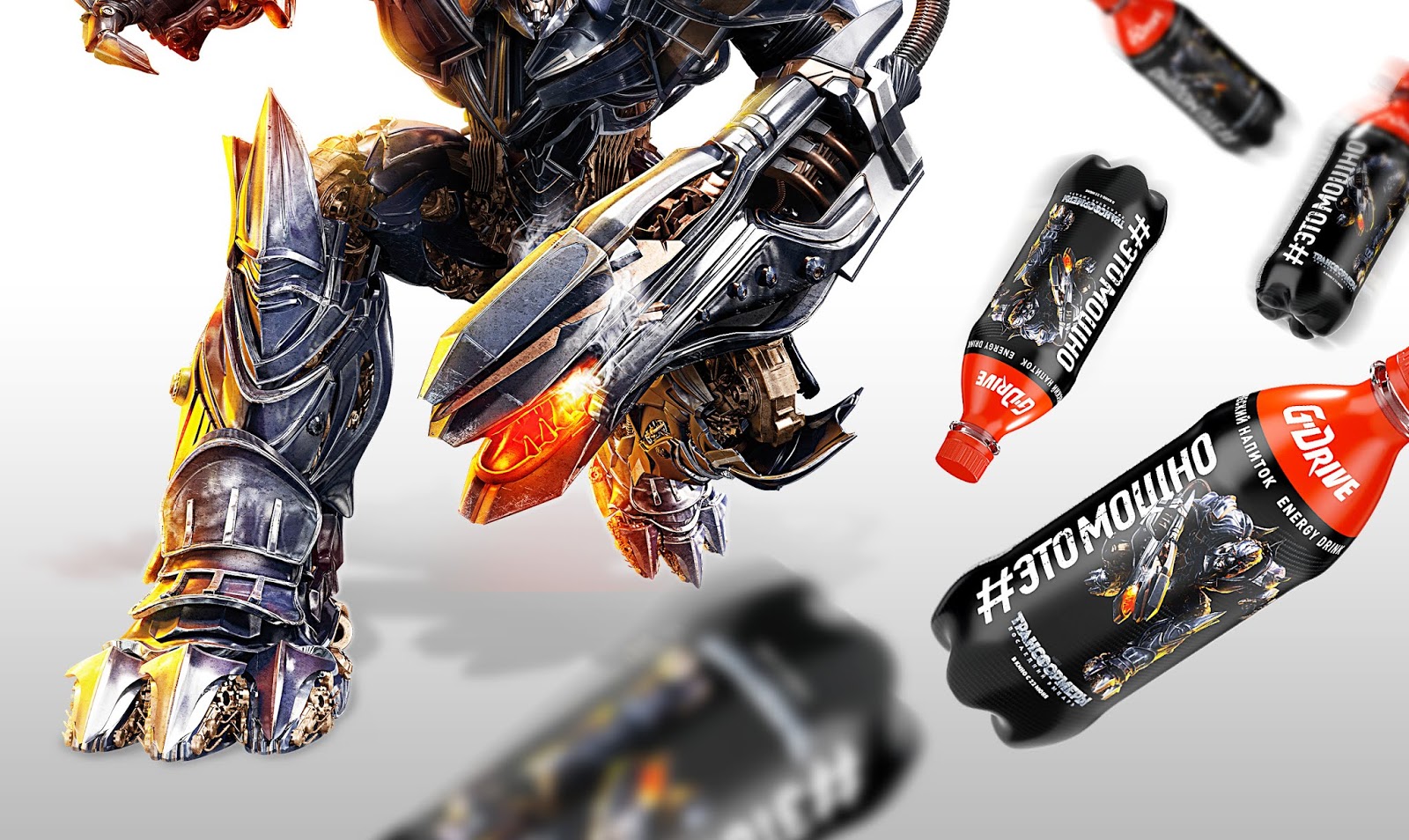 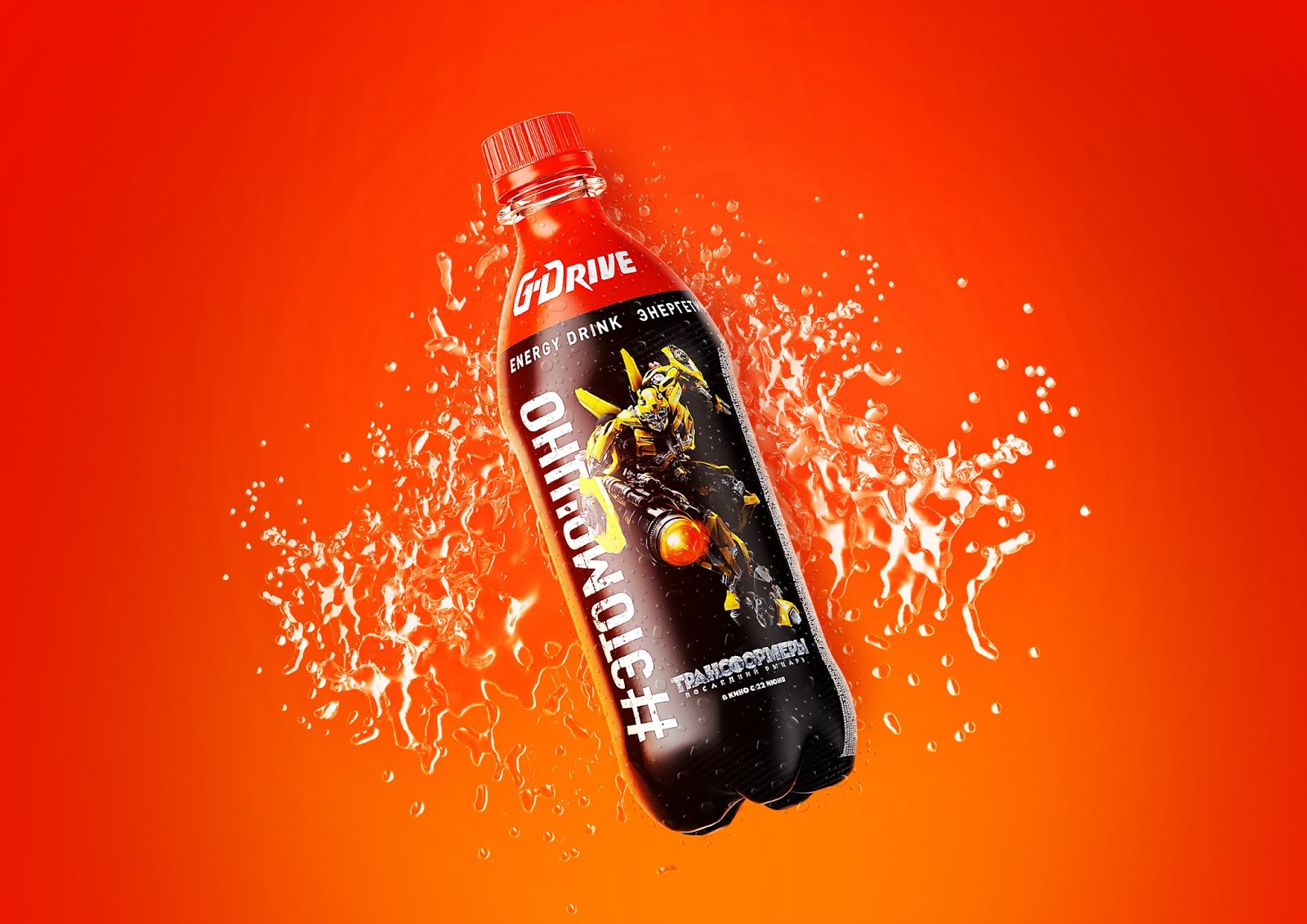 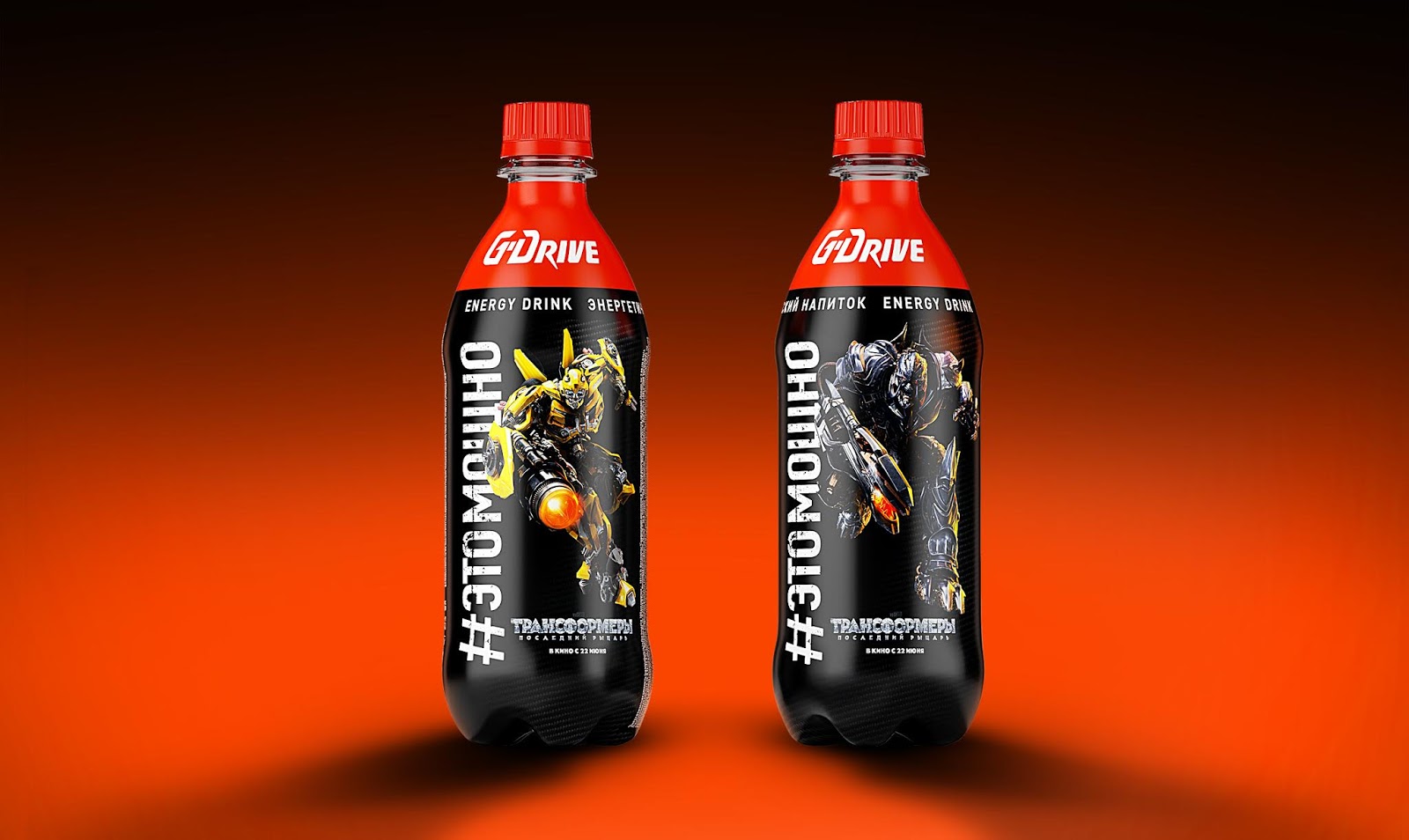