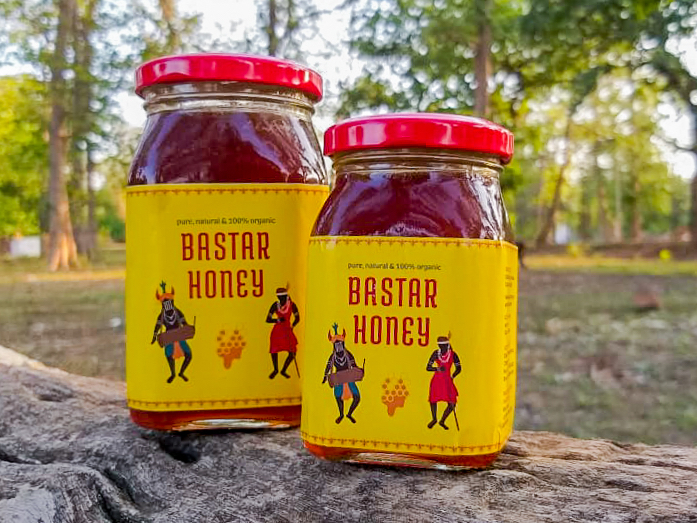 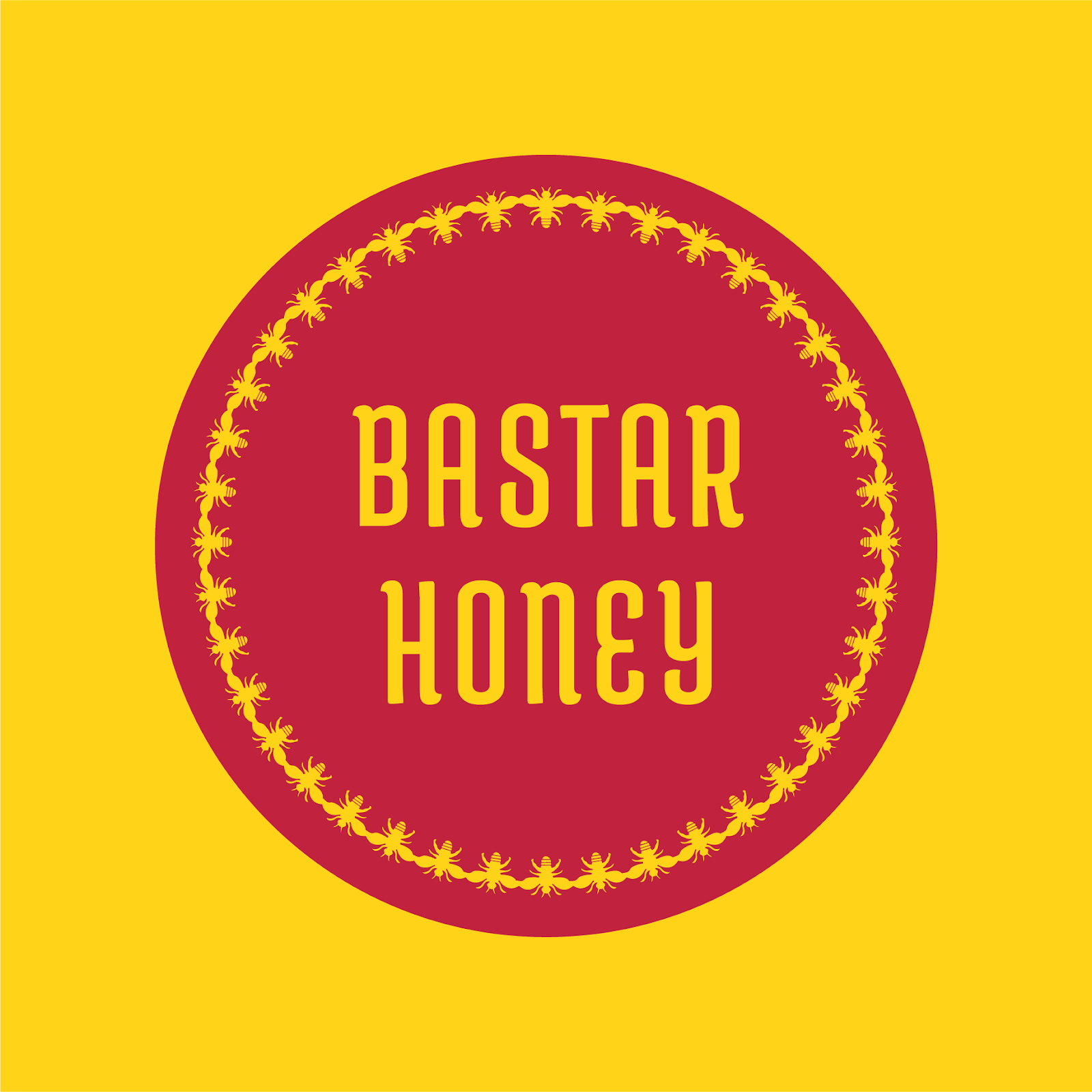 ‘Bastar Honey’ is a fully registered NGO which sells 100% organic, unadulterated and natural honey (also called as Bastar Honey), from the tribal region of Bastar in Chhattisgarh, India. The tribes in Bastar, that engaged in the occupation of beekeeping, use the kind and non-violent cultivation approach of honey production.

Harvested from the forests of Bastar, the honey is produced in the most kind and non-harmful way by the beekeepers from the tribal regions of Bastar. The bees are gently blown away from the wooden box hives, rather than sedating them with smoke, which is at present, the most common practice followed in honey production. Bastar Honey is a pesticide/preservative-free, unadulterated product produced using a completely non-violent approach of honey harvesting, right out of the tribal region of Bastar!

The real intention of redesign of their packaging is to strategically launch this pure honey from the tribal region of Bastar to the cities and other parts of the country. After the redesign, the product is currently available in the city of Hyderabad at two boutique stores that sell organic food items. 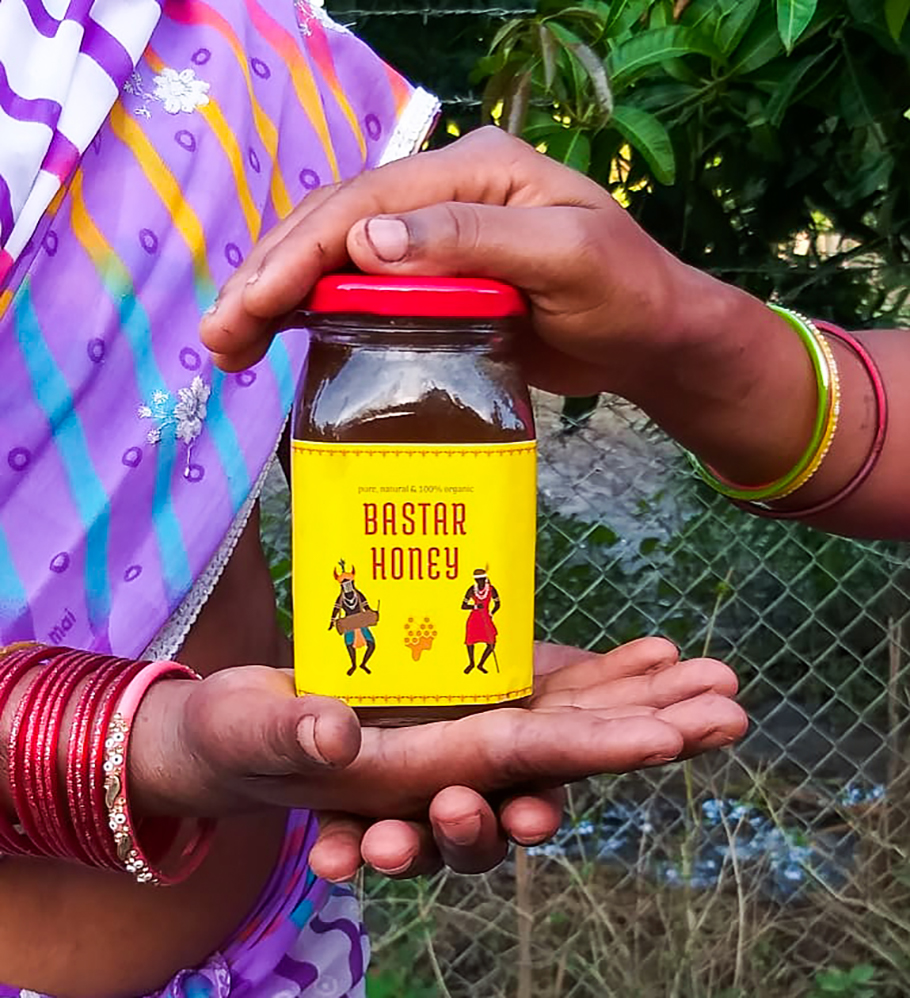 What’s Unique?
The identity reflects the vivid colourful culture of Bastar, the largest tribal district of Chattisgarh in India. The illustrations on the packaging label visually showcase how the tribal people adorn themselves with ornaments made of beads, sheets, cowries, bones, bronze feathers, mixed metals and copper. These tribes from Bastar are known for their passion for dance, music and colourful festivals. And so, the two figures on the packaging bottle, a male and a female, are shown celebrating and dancing, just like they would in a celebration procession. It is almost like they are celebrating this pure product that comes out of their region and community.

The bright yellow background with a red bottle cap adds to the aesthetic representation of the community as well as works as an attractive packaging label on store shelves. As this product is entirely produced and packaged by the tribal people at a local workshop, the label and sticker are simple and digitally printed that can be stuck conveniently and quickly on the bottles, saving their time and effort for the actual honey production process. 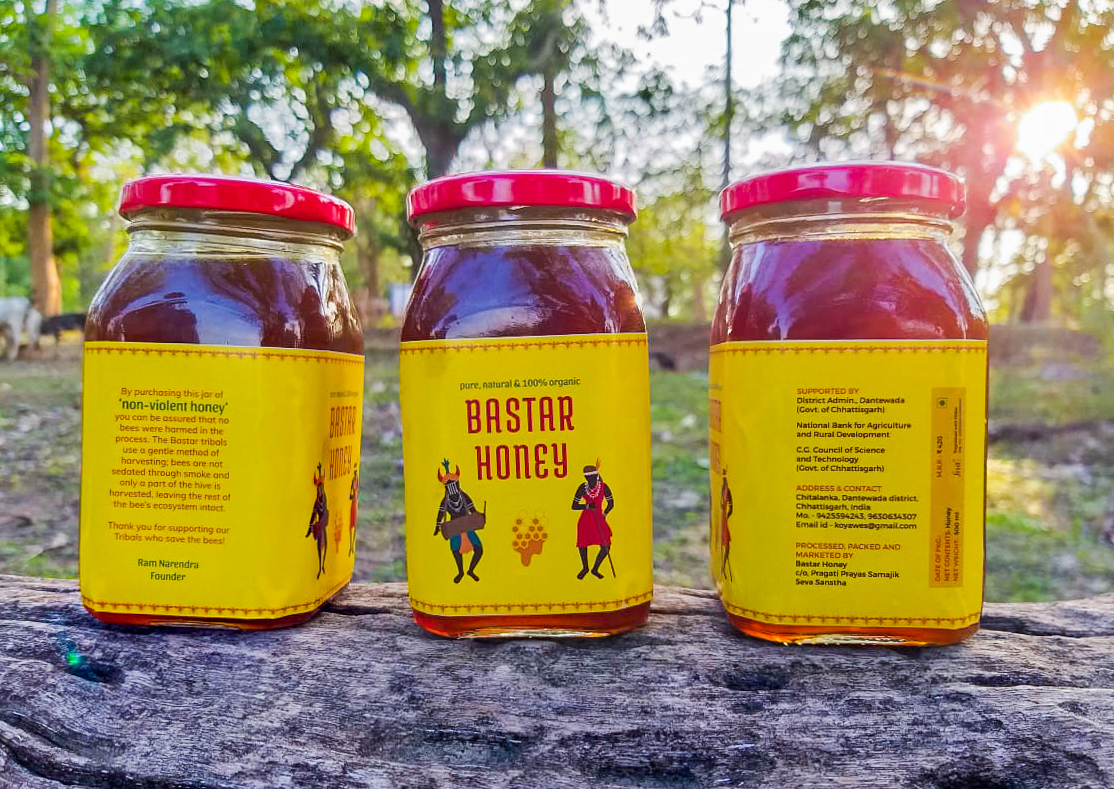 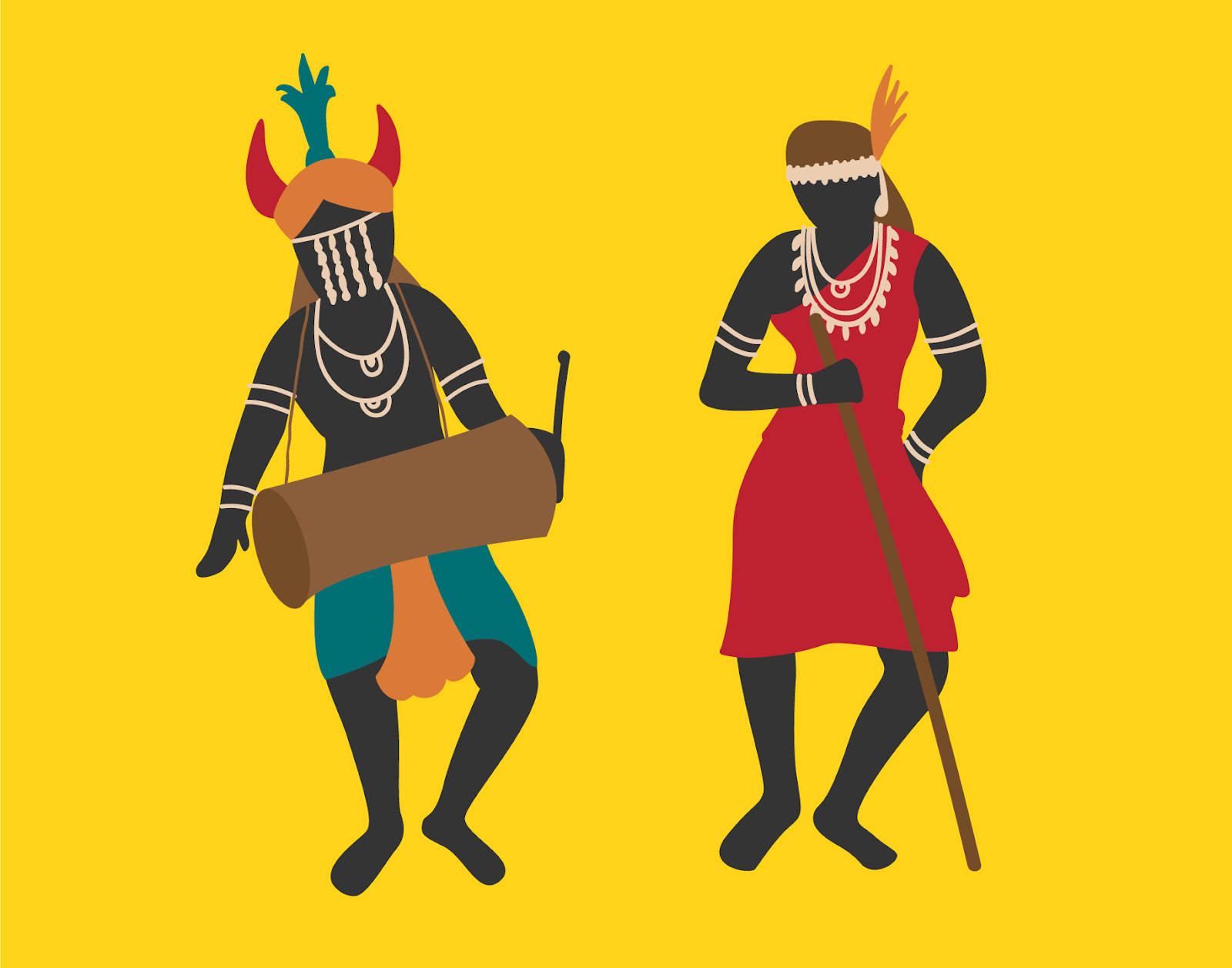 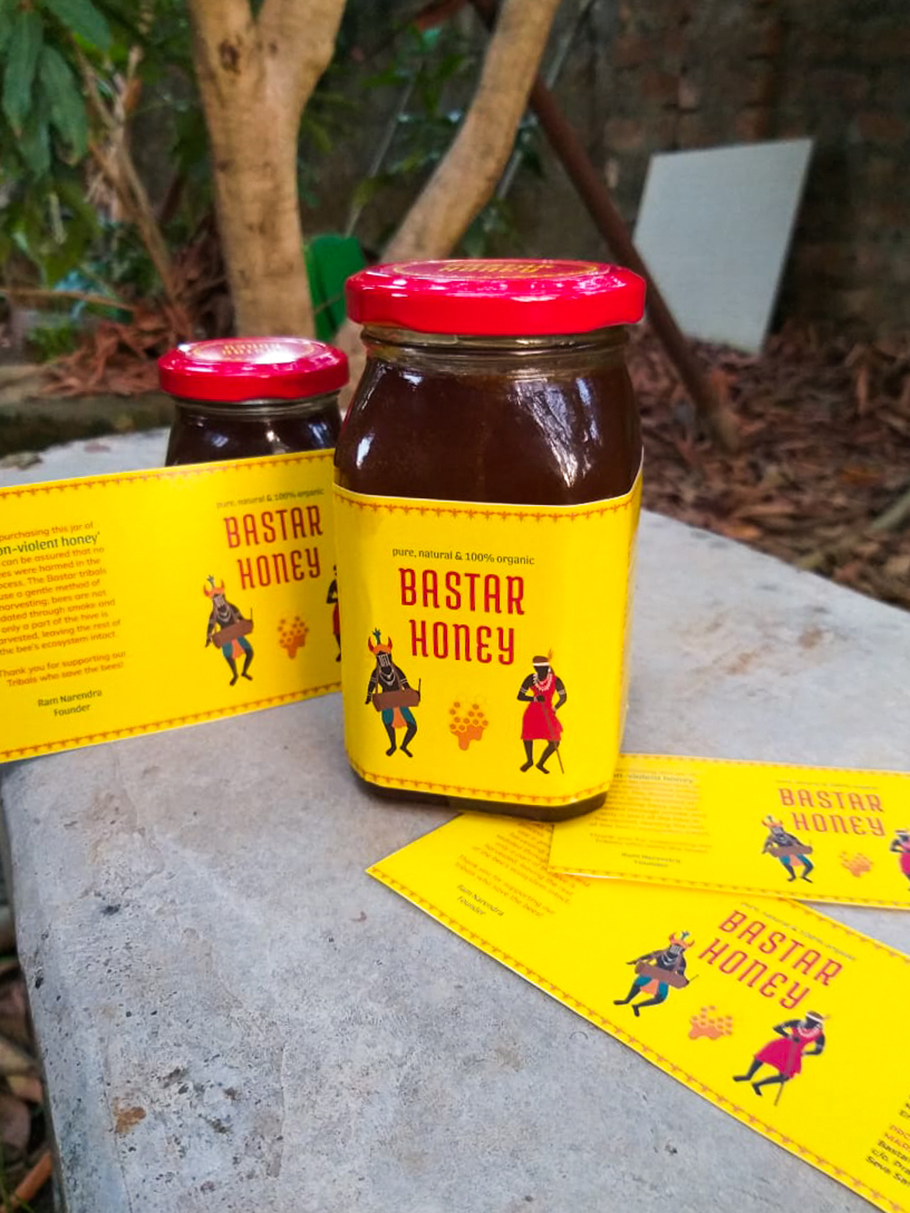 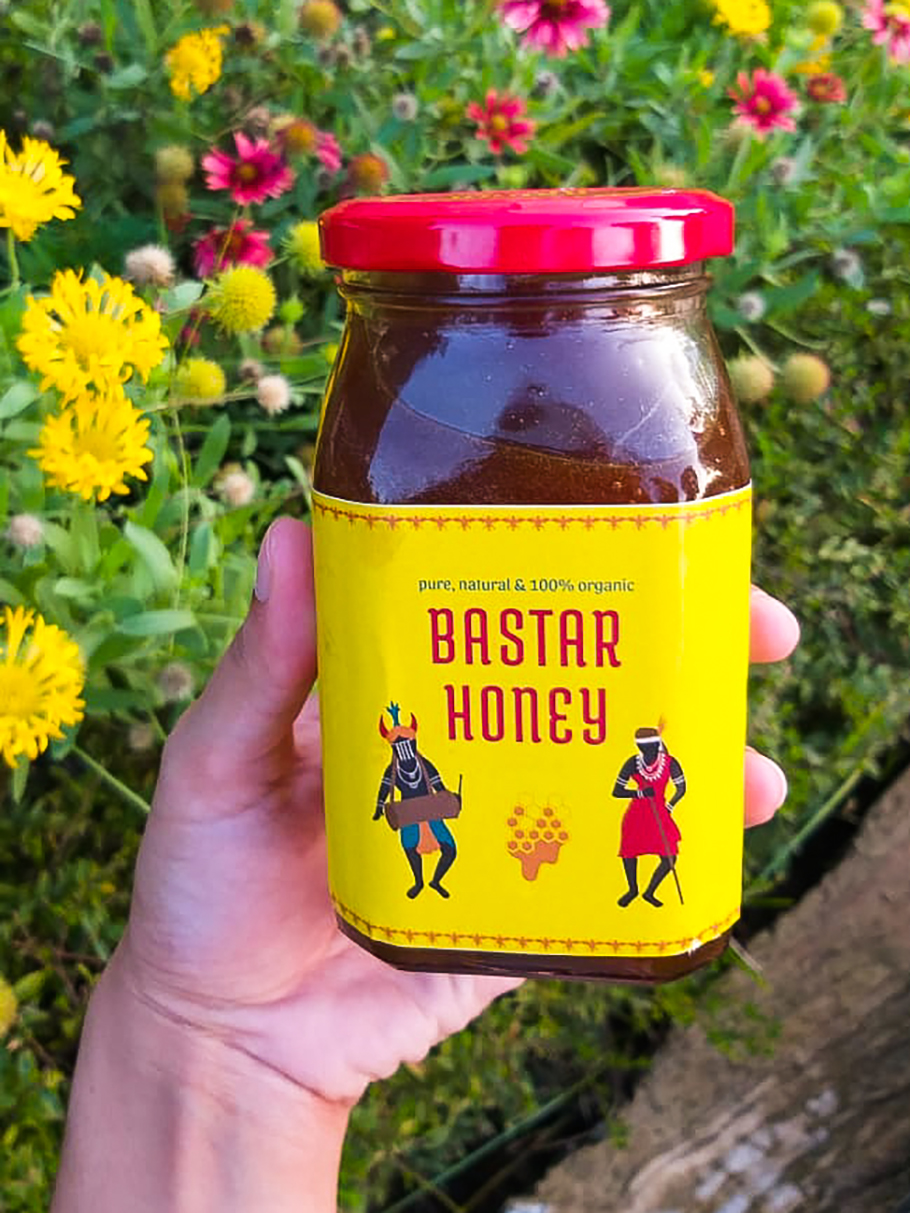 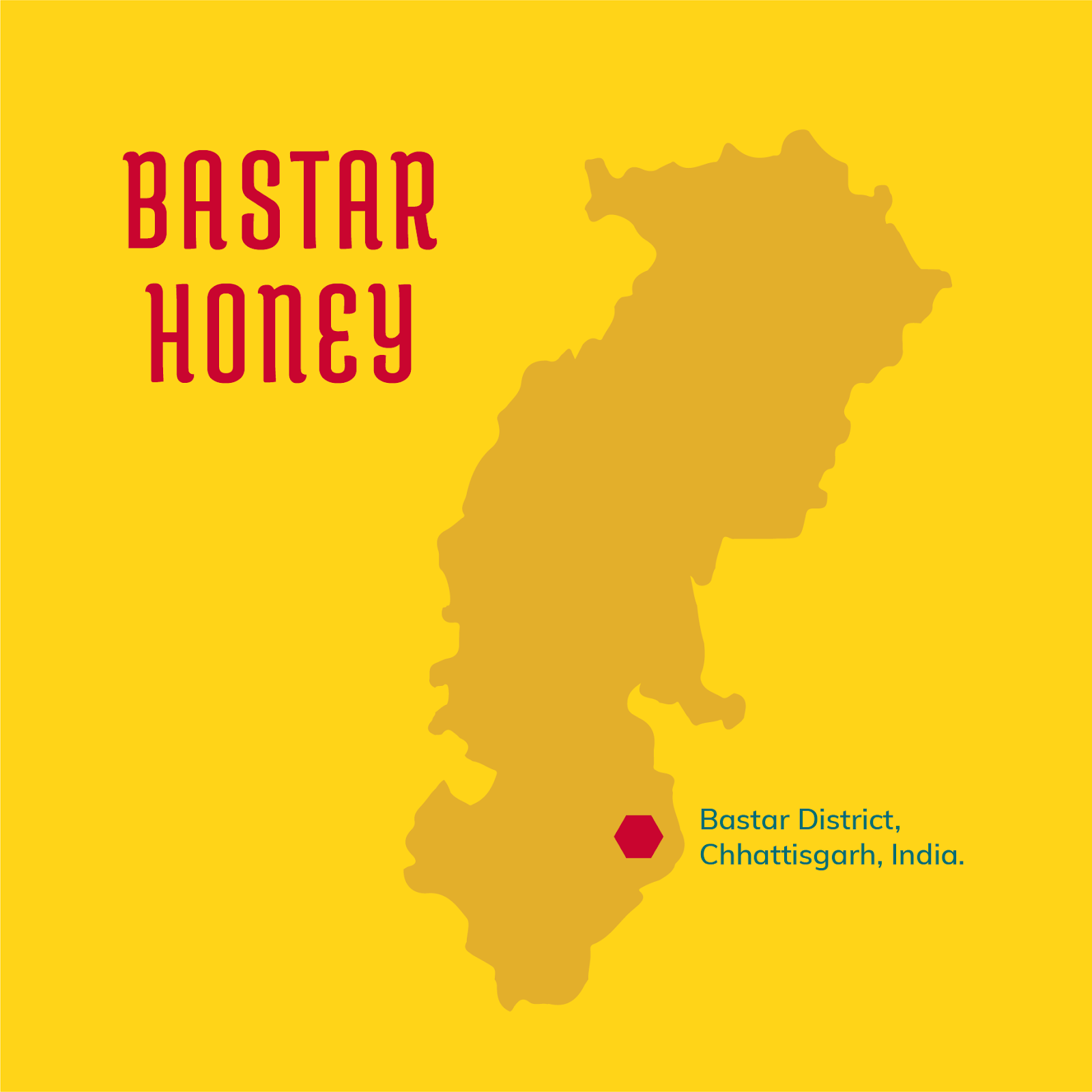 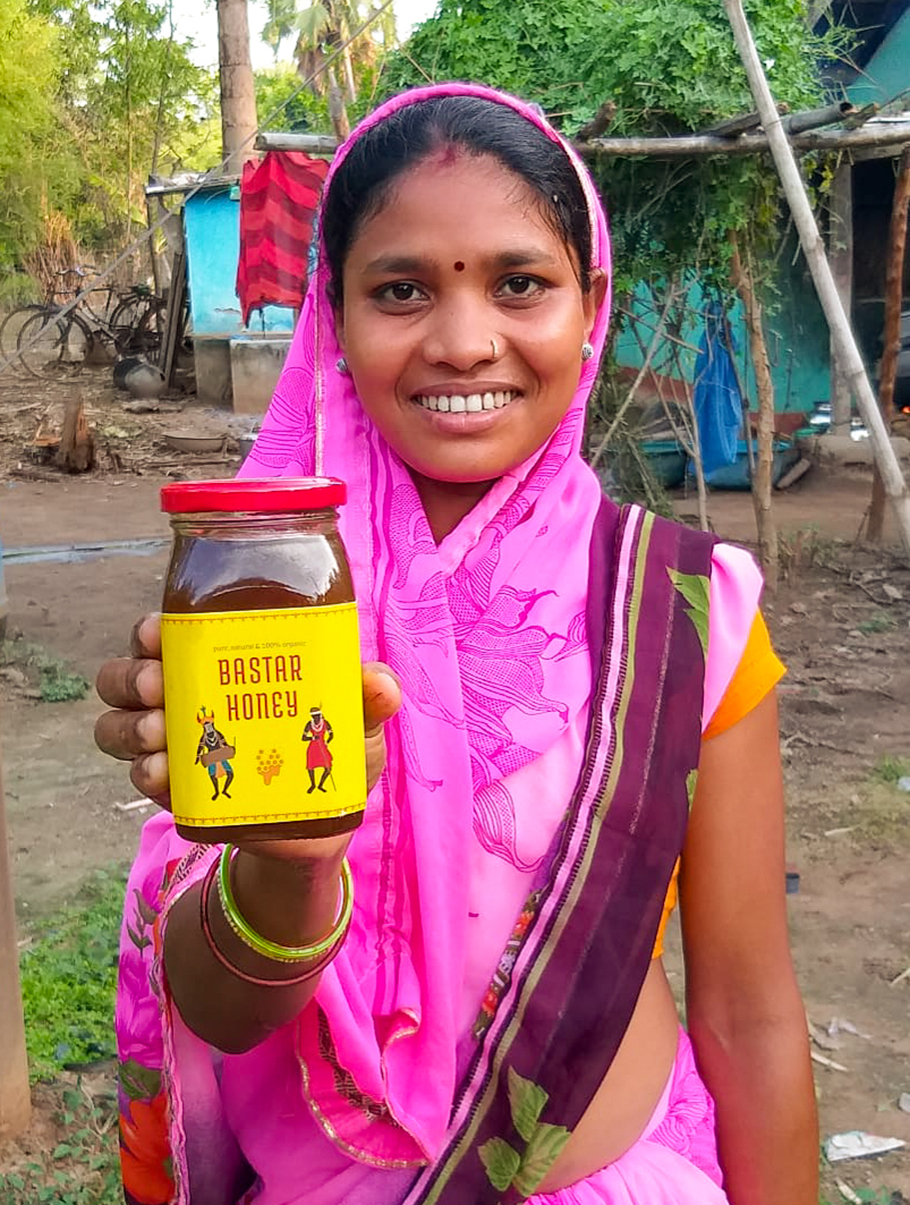 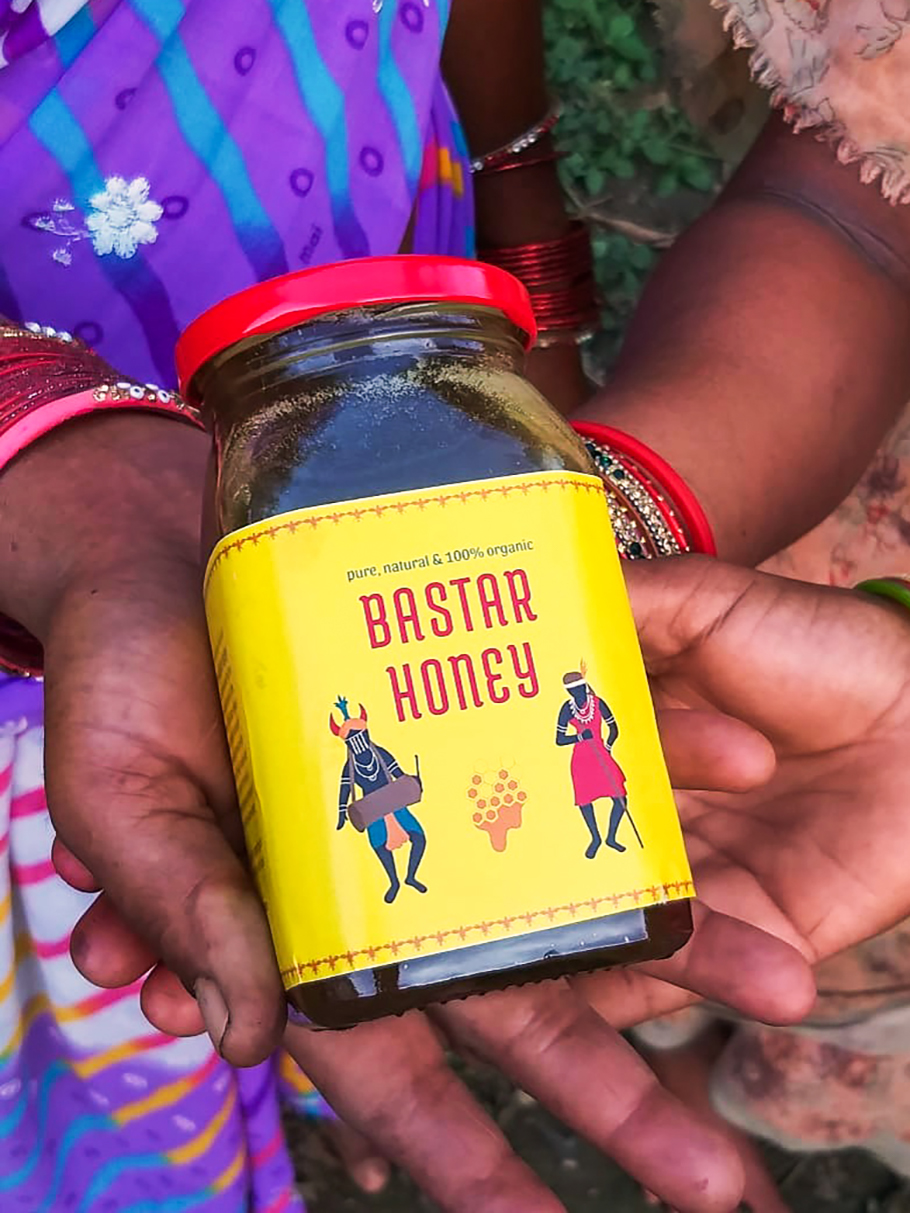 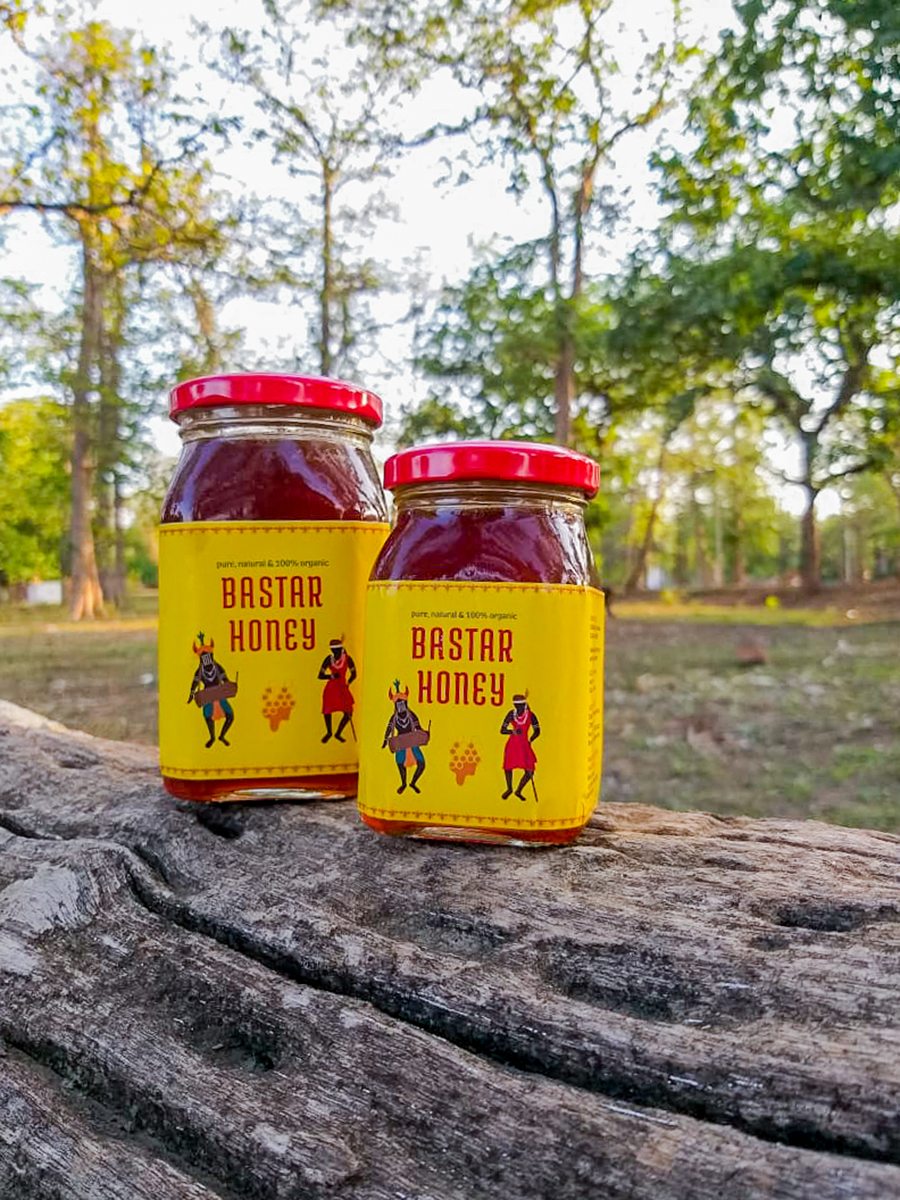 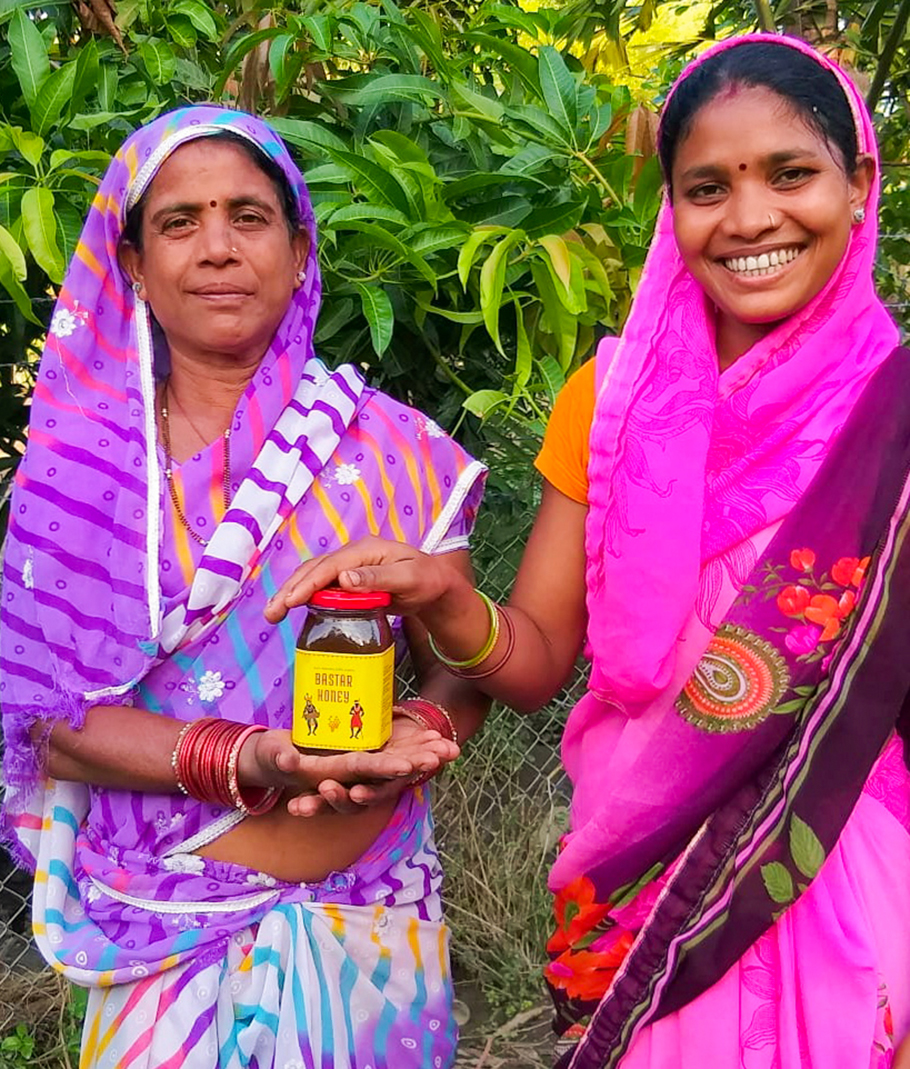