Every year, we throw away a ton of packaging waste (actually, over 70 million tons). It makes up the single largest percentage of trash in our landfills (beating out industrial waste, electronics, food… everything). Figures released by the EPA indicate this problem is getting worse every year.

As a package designer (and grad student—meaning I know everything and can solve every problem, naturally), I was concerned about where this trend is going. Of course, many talented designers working in the field have made great efforts over the past few years to reduce the amount of packaging that goes onto a product. However, for my Masters Thesis, I asked the question: Can we eliminate that waste entirely?

The package is a septic-safe, water-soluble paper. Consumers take the whole package into the shower with them. When it gets wet, it dissolves, leaving no packaging behind. 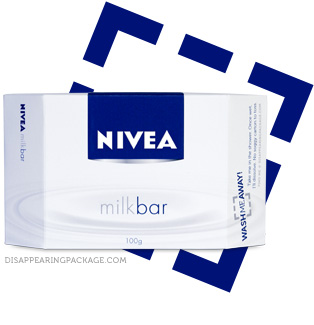 EXISTING PACKAGING
Though here NIVEA is used as an example, this is true of nearly all bar soaps: the bar is contained in what is usually a heavy paper carton that is rendered useless as soon as the soap bar is removed.

DISAPPEARING SOLUTION
The packaging seems familiar—essentially appearing as a paper box. But there are two primary differences: First, the shape, which was developed to prevent the consumer from absentmindedly tearing open the package. They shouldn’t open it because (Second) the paper is water-soluble and designed to stay on. THE METHOD
The substrate functions just like normal paper—it can be printed on and embossed, as in this solution—until it is exposed to water. When the consumer takes it into the shower, the non-toxic material 100% dissolves and washes down the drain. 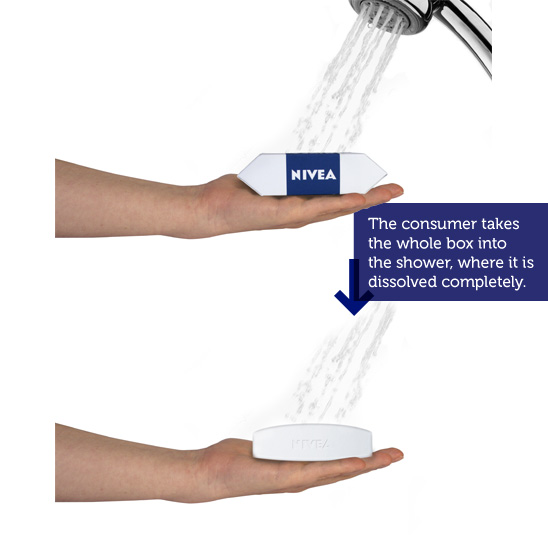 INSIGNIA
Every solution features an insignia that both identifies it as a Disappearing Package (building brand recognition) and clearly instructs the consumer on how to disappear it.