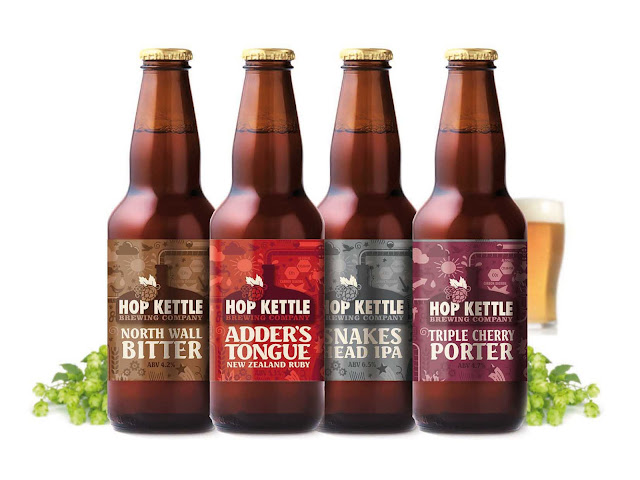 Brand and packaging design consultancy Pure has seen a significant increase in its brewery and alcoholic beverage client portfolio.

The number of clients in the sector that Pure represents has risen by 500 per cent since the consultancy completed a full rebrand of Oxfordshire-based brewery Loddon last year.

With such obvious benefits, a significant number of other breweries and beverage producers have contacted Pure. The consultancy now counts Wibblers Brewery and Broadland Wineries amongst its clients, with Pure helping to create a Sangria brand that will be stocked in Asda for the latter.

Pure has also taken on a branding project in conjunction with the Hop Kettle Brewing Company. This involves identity creation for a range of beers, including the likes of Adder’s Tongue, aimed at the ‘up and coming beer drinker’.

Commenting on the surge of clients, David Rogers, founder and creative director at Pure, said:

“This really does say a lot for simple, targeted design work. Our work with Loddon was about creating a fresh, uncomplicated design and this has not only influenced the consumer by encouraging them to purchase, but it has also had an impact on others in the industry and prompted them to review their own offering, which can only be a good thing.

“Having someone pick up the phone and ask you to work for them on the strength of something you’ve done for another client is the best type of new business call for me. It shows that people are sitting up and taking notice of your creative, which is ultimately what this is all about.”

“Pure took a very vague brief and turned it into a stunning and very eye catching design which really stands out on the shelves when alongside the other 70 bottled beers we offer from around the world.

Everything was done very swiftly with an amazing turnaround on all changes. The team at Pure was very amenable to my whims and nothing fazed them at all.”

Pure works across a range of sectors and has offices in Nottingham and Moscow. Some of Pure’s other clients include Pets At Home, Wilko, Greencore, Associated British Foods and Russian health and beauty giant Pervoe Reshenie.