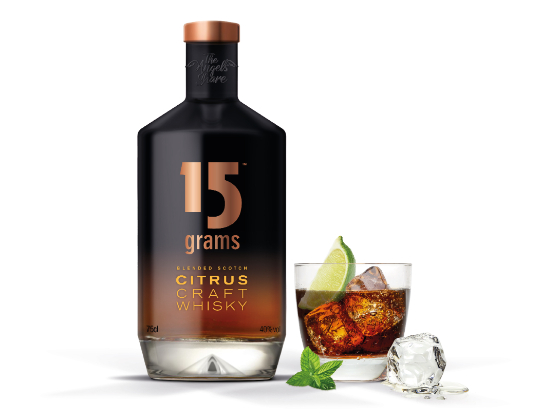 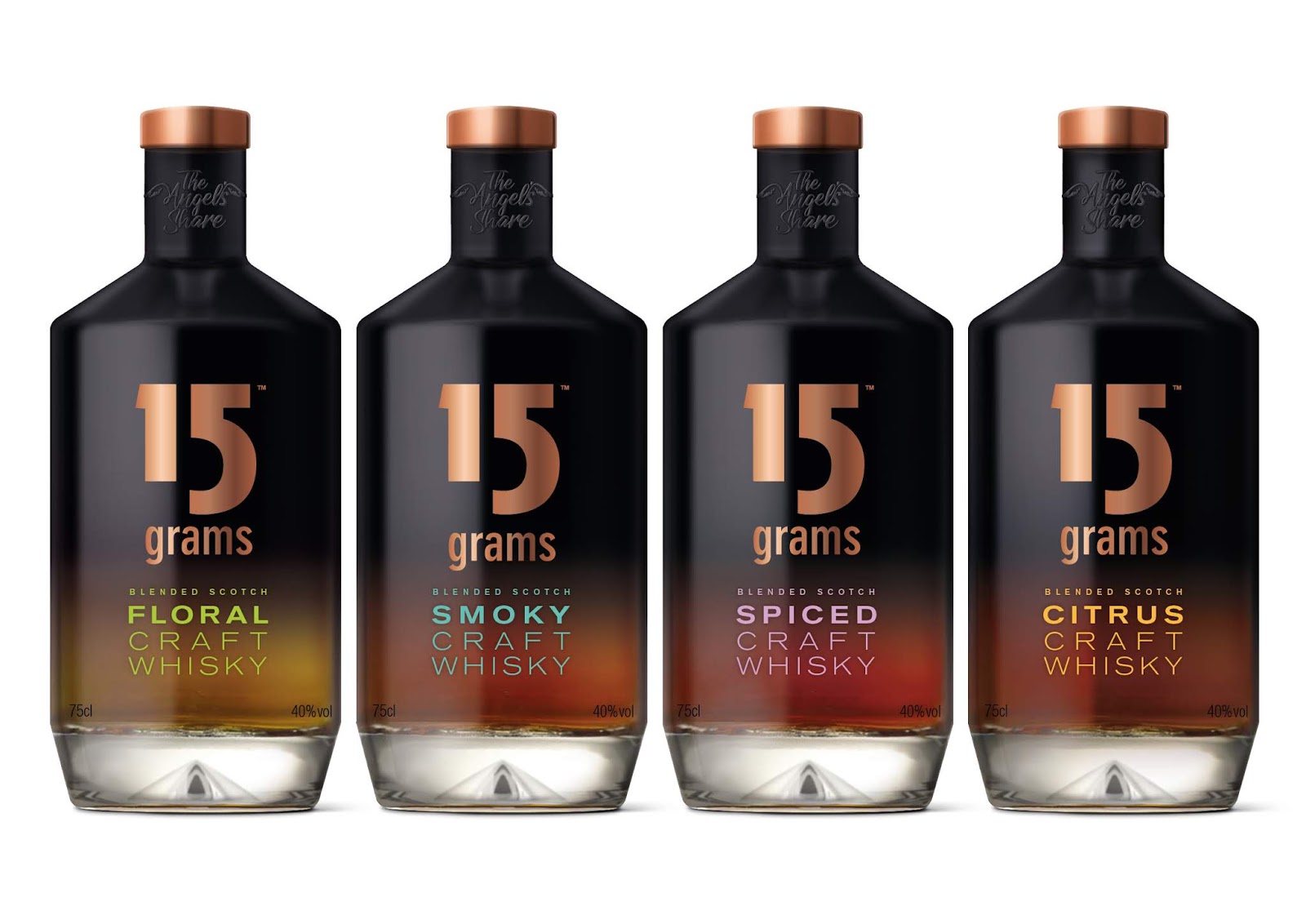 Branding and design agency Biles Hendry has created a range of four blended scotch whiskies to appeal to millennials, in response to a new Creative Challenge on alcohol set by FMCG title The Grocer.

Millennials are driving growth in the spirits sector, with gin experiencing the greatest surge, but blended scotch has failed to capitalise on this trend. Biles Hendry realised that the two greatest challenges that whisky faces are its fusty image and that, for many, it’s an acquired taste.

To millennials, scotch speaks of tradition; it’s what the older generation drinks while appreciating notes developed over time – and that’s a problem for a generation focused on living in the moment. So, the team at Biles Hendry has created a new concept and range of blended scotch whiskies to appeal to this consumer group’s thirst for newness. 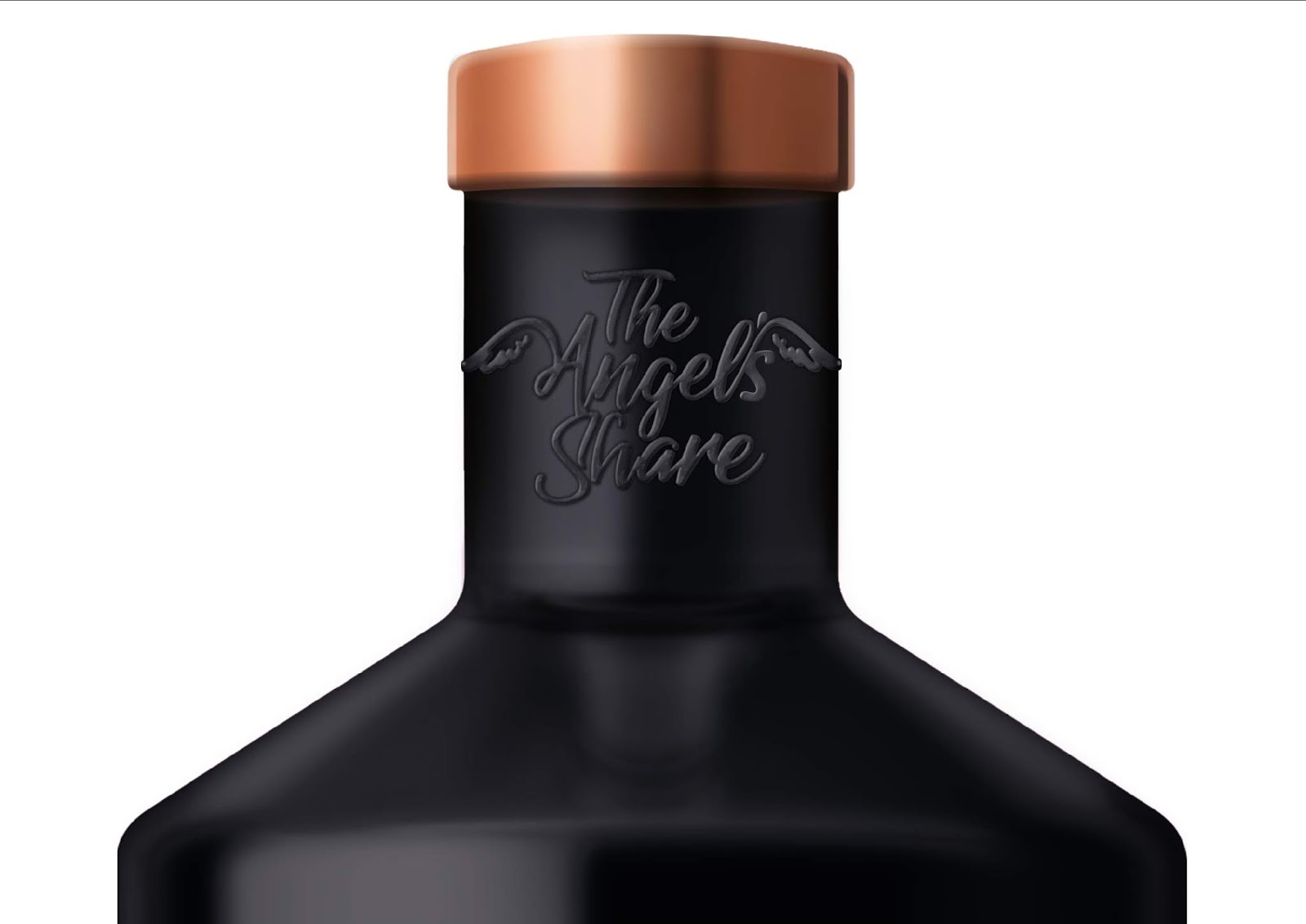 A new kind of blend
Called 15 Grams, the brand name references the two per cent of liquid per bottle that’s lost to evaporation while the alcohol matures in barrels, developing its golden hue and distinctive taste – known in the industry as the angel’s share.

Biles Hendry has created 15 Grams Craft Whisky in Floral, Smoky, Spiced and Citrus which denote the individual tastes that the angels ‘give back’ in return for their share. Notes of vanilla, lapsang souchong, cinnamon and lemon have been added to create accessible, distinct flavour profiles, and each variant lends itself to being mixed and garnished according to taste. A Smoky 15 with Coke and a slice? Or a Floral 15 with 7UP and a bergamot twist, perhaps?

Millennials are drinking less but better-quality alcohol and are prepared to pay a little more for it. So premium-level signifiers, including a heavy-based glass bottle and metalised stopper, position it at the higher end of the market. Modern flare is achieved with frosted, semi-matt black finishing printed straight onto the glass, lightening towards the base to reveal the product. 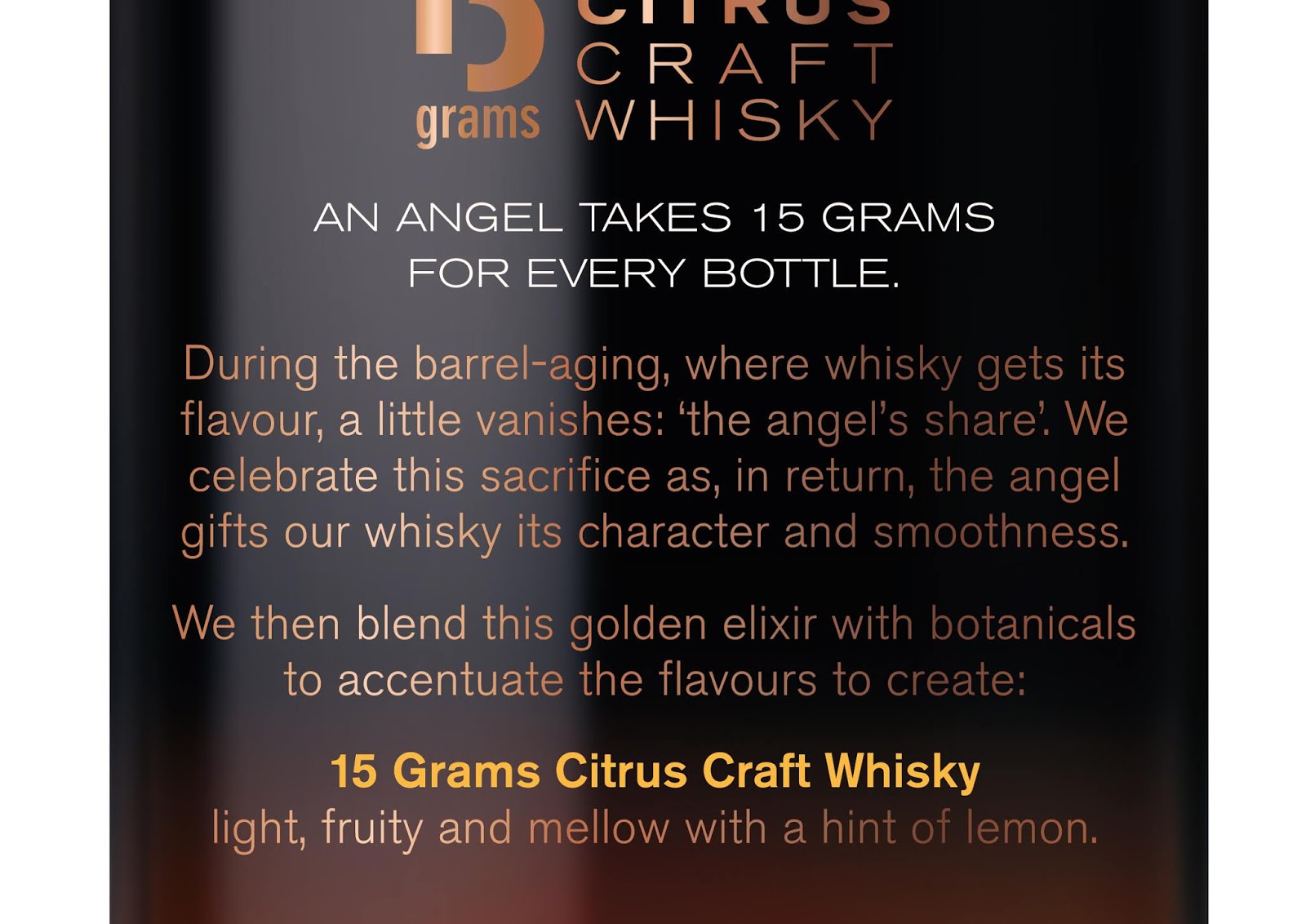 Insta-marketing
Asked to develop an activation plan to support the new range’s launch, Biles Hendry has proposed an online and social-media marketing campaign with an augmented-reality app to help drinkers navigate blends and combinations. A select number of bars would be approached, with mixologists turned into brand evangelists via sampling and training events supported by bespoke glassware. Scratch ‘n’ sniff cards and 15 Grams-flavoured wine gums would also be handed out in clubs and bars to inspire Insta-worthy moments.

Anthony Biles, founder and creative director of Biles Hendry, says, “To build a successful brand, we needed to create distinct and ownable design elements that act like an instantly recognisable shorthand for consumers. Our approach challenges ‘follow-the-rules’ thinking and makes scotch appealing to a generation that wants to break from the establishment and create its own identity.” 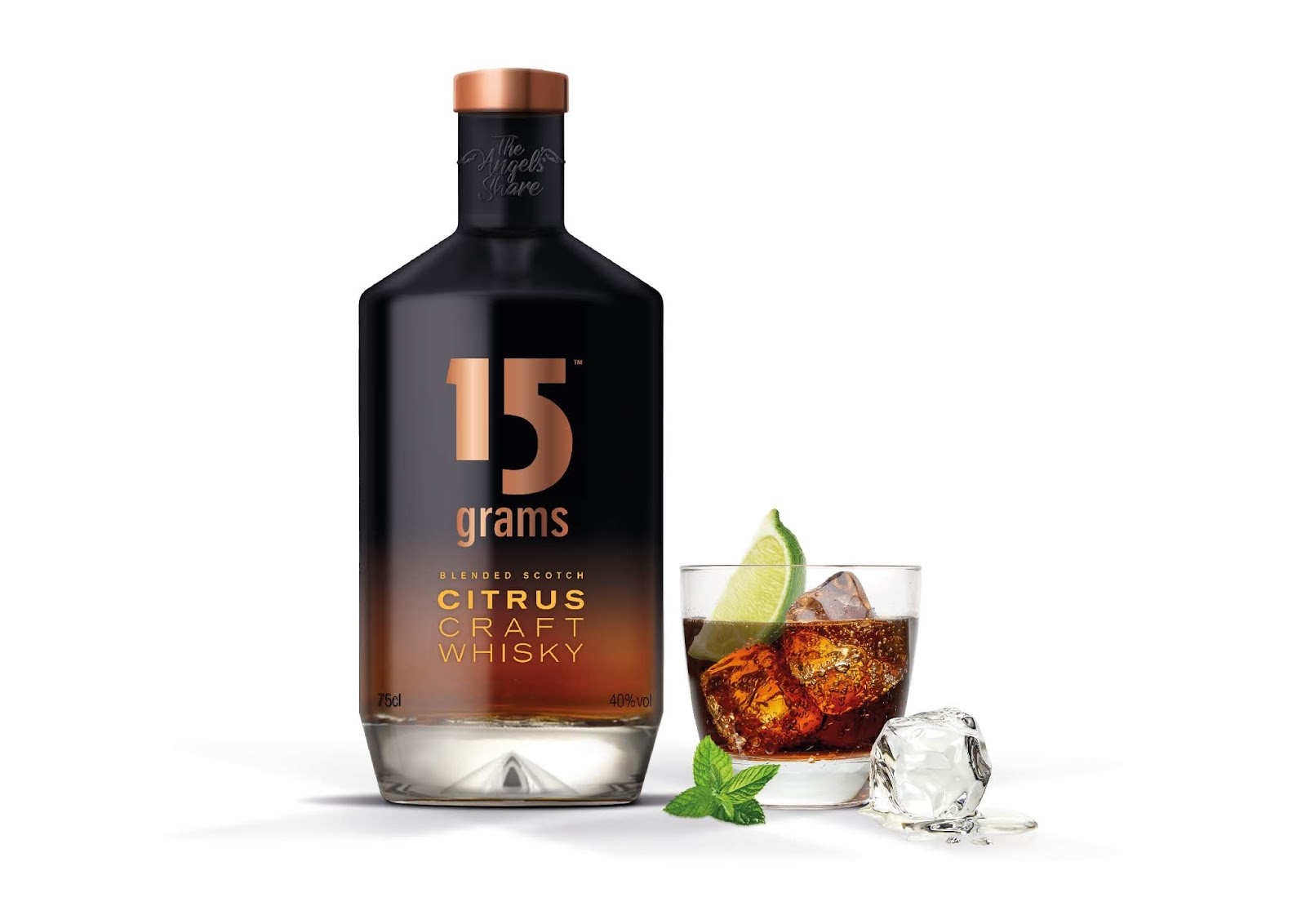 Proof of perfection
Until now, the visual language of this category has focused on founder stories, heritage dates, gold foiling and old-fashion typefaces. Biles Hendry has moved away from traditional cues, opting instead for demystified flavour descriptors, brightly coloured, modern typography and subtle details, such as the angel’s share reference on the neck, that reinforce the brand story, its reason for being. 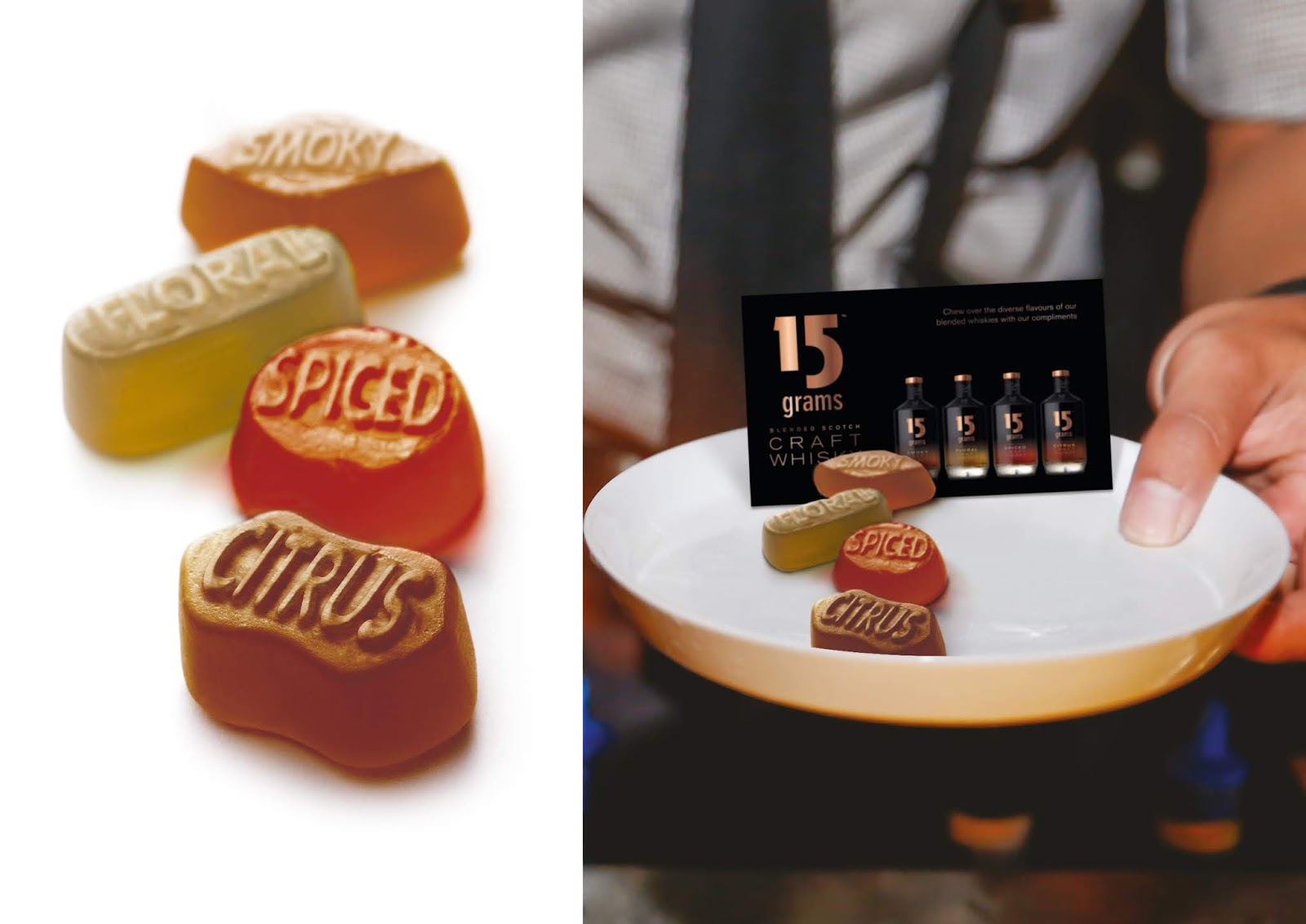