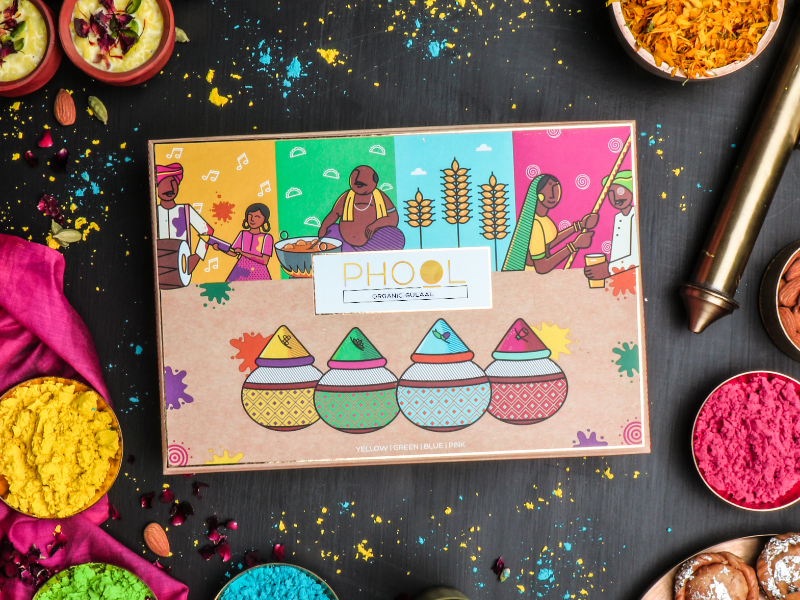 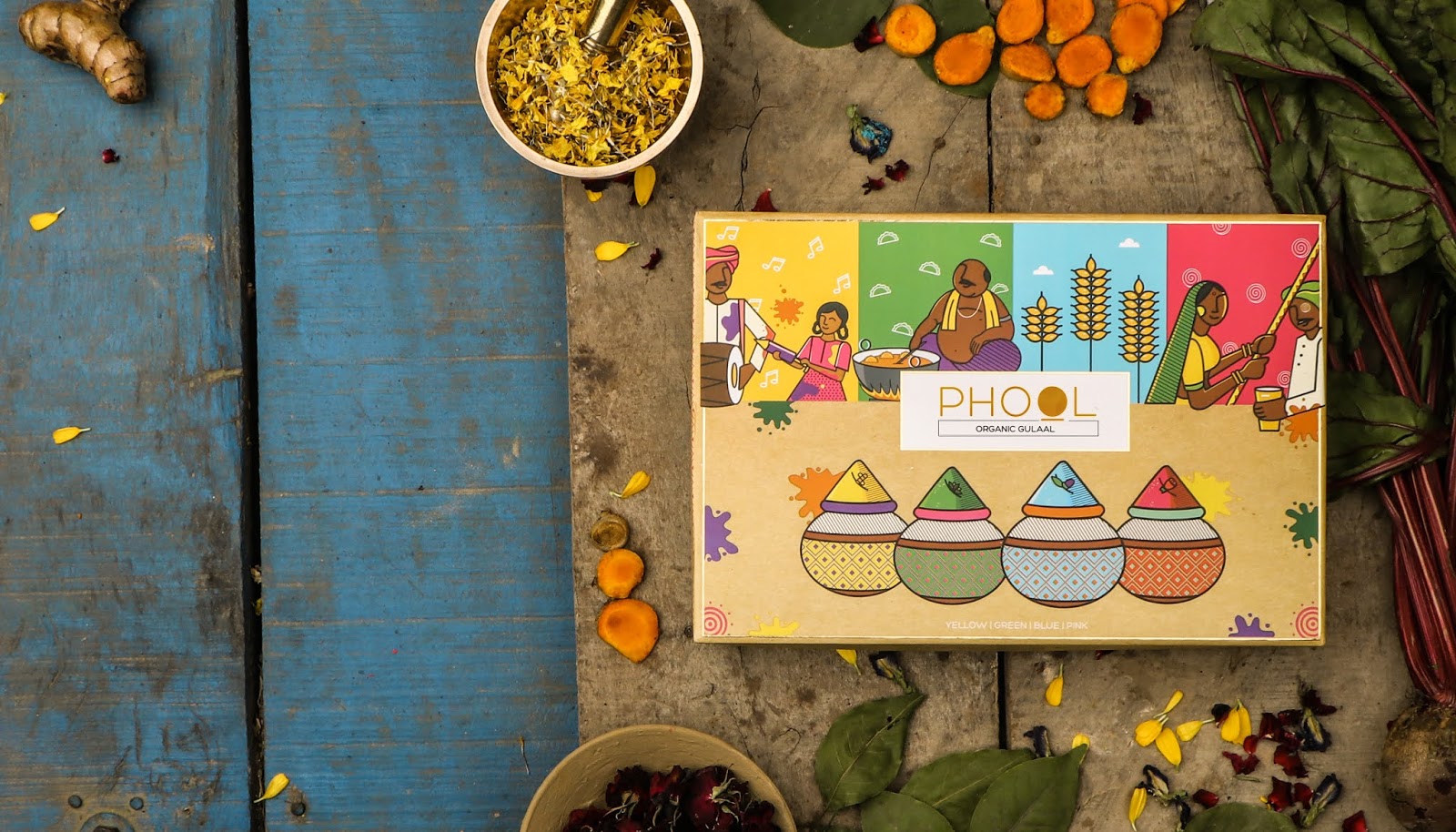 Phool Organic Gulaal is an earnest attempt at reviving the lost tradition of making Holi colours from 100% natural ingredients. Widely known as “the festival of colours”, in Indian mythology, Holi is considered to symbolize the triumph of good over evil. This festival is celebrated with time-honoured rituals like offering sugarcane sticks and rice to the fire of “Holika Dahana”, making traditional delicacies like Gujiya, Laddoos, and Thandai at home, dancing to the beats of dhol, and colouring loved ones with the traditional Holi colours called Gulaal.

Unfortunately, over the time, the use of toxic chemicals like heavy metal, sand, asbestos, chalk, silica, has become common in the making of Gulaal, not only disrupting the age-old tradition of making it with natural ingredients but also leading to various side effects and an unpleasant experience for the users. 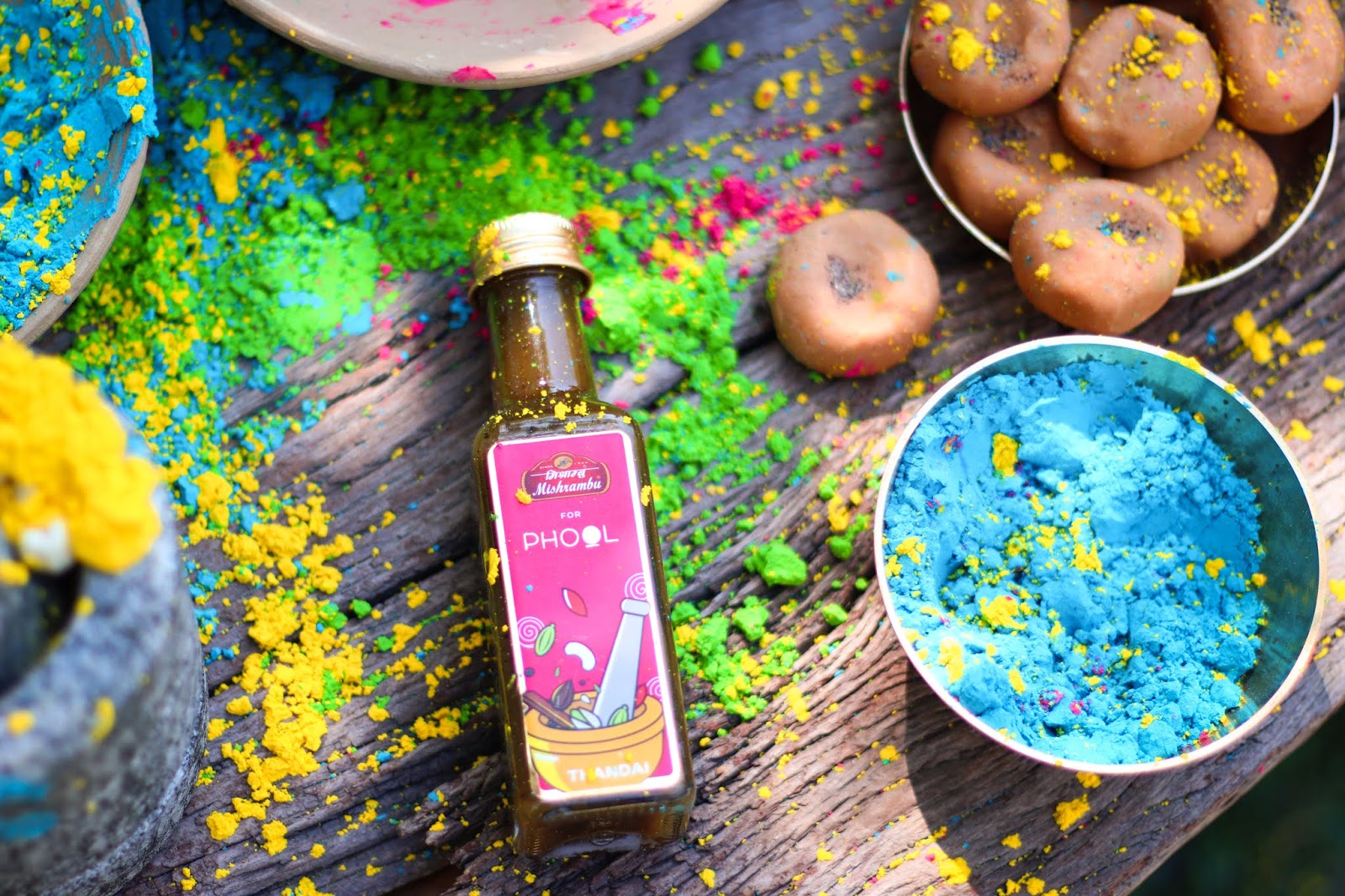 Handcrafted the traditional way with flowers and herbs by our women flowercyclers, Phool Organic Gulaal has earned itself the title of first-ever Gulaal certified for skin-safety by IIRT. Revisiting the age-old rituals of Holi celebrations through the box, we offer 4 natural and vibrant colours handcrafted from rich flowers & herbs. The box also brings the traditional beverage of Holi, Thandai, sourced exclusively from Mishrambu, the oldest brand of Varanasi, to add more sweetness to the celebrations.

The box of Phool Organic Gulaal reminisces these traditional rituals of Holi celebration. Bringing together the Holi rituals from various cultures across India, fixing their nostalgic Holi memories in small rectangular frames, the box displays the four colours that it holds (Yellow, Green, Blue, and Pink) in earthen pots, just as they were stored in the ancient times. 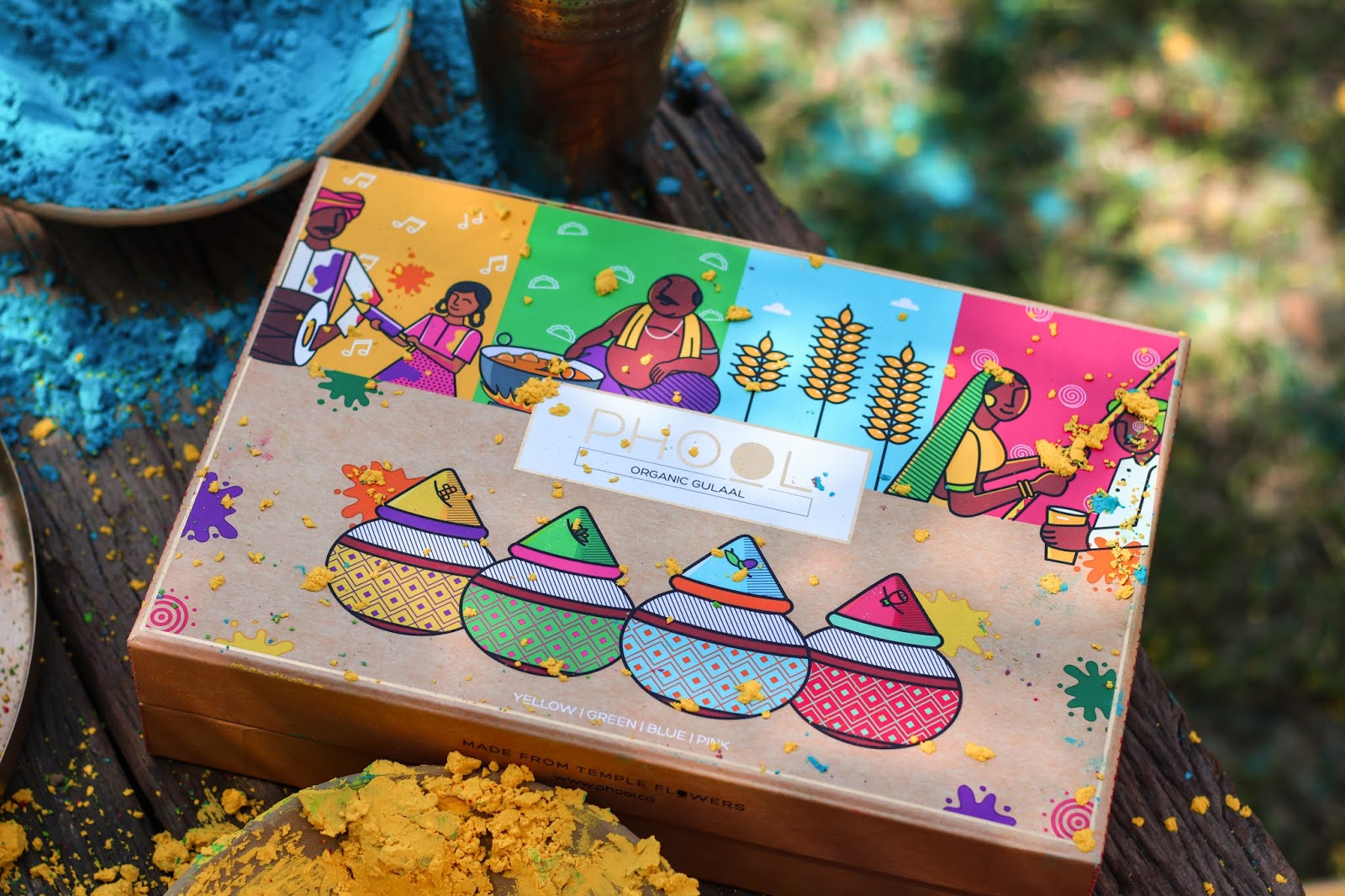 CONTENTS OF THE BOX

The project involved designing a gift box for the organic Gulaal and Thandai as well as the accompanying collaterals. The myriad traditions across India, a colour palette picked from the Indian way of life as well as the cultural imagery served as the inspiration for this project. The design endeavoured to capture the nostalgia and good memories of the colourful festival in a gift box. 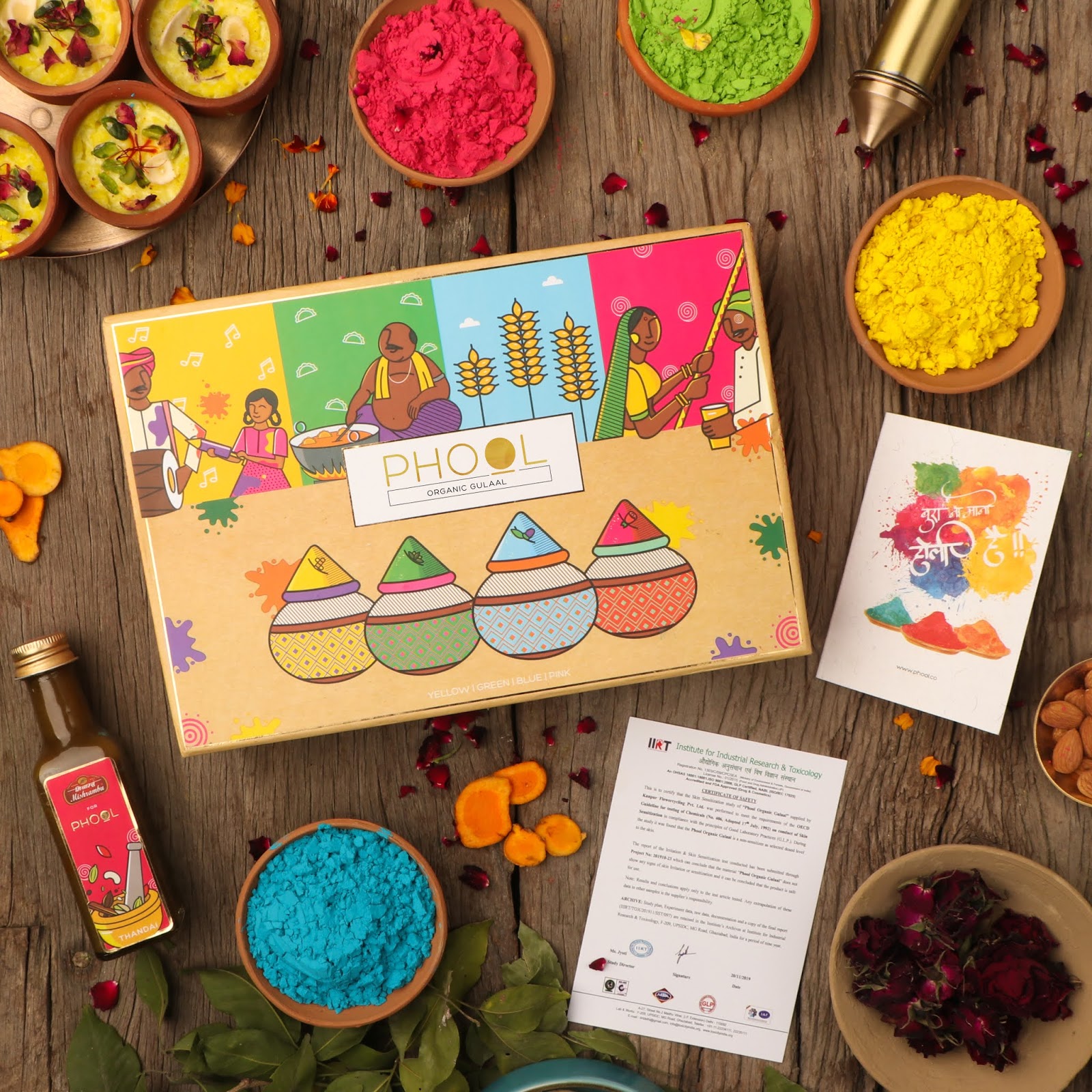 The packaging reflects how amazing the festival of Holi feels, with its sensory overload of colours and patterns. Four panels of illustrations are juxtaposed on the box design, portraying the different aspects of Holi and its celebration throughout the length of the nation. While the first panel shows the typical North Indian celebration with men, women, and children dancing to the tunes of a ‘dhol’, the second panel shows a ‘halwai’, a traditional Indian confectioner engaged in the task of preparing ‘gujiya’, the sweet delicacies of choice during the Holi celebration. The third panel shows harvest in full bloom, as Holi marks the onset of Spring after the long harsh months of winter. The last one shows the practice of ‘Lathmar Holi’ celebrated in some parts of India, a quirky tradition, where women run after men with sticks to reciprocate for their applying colours on them. 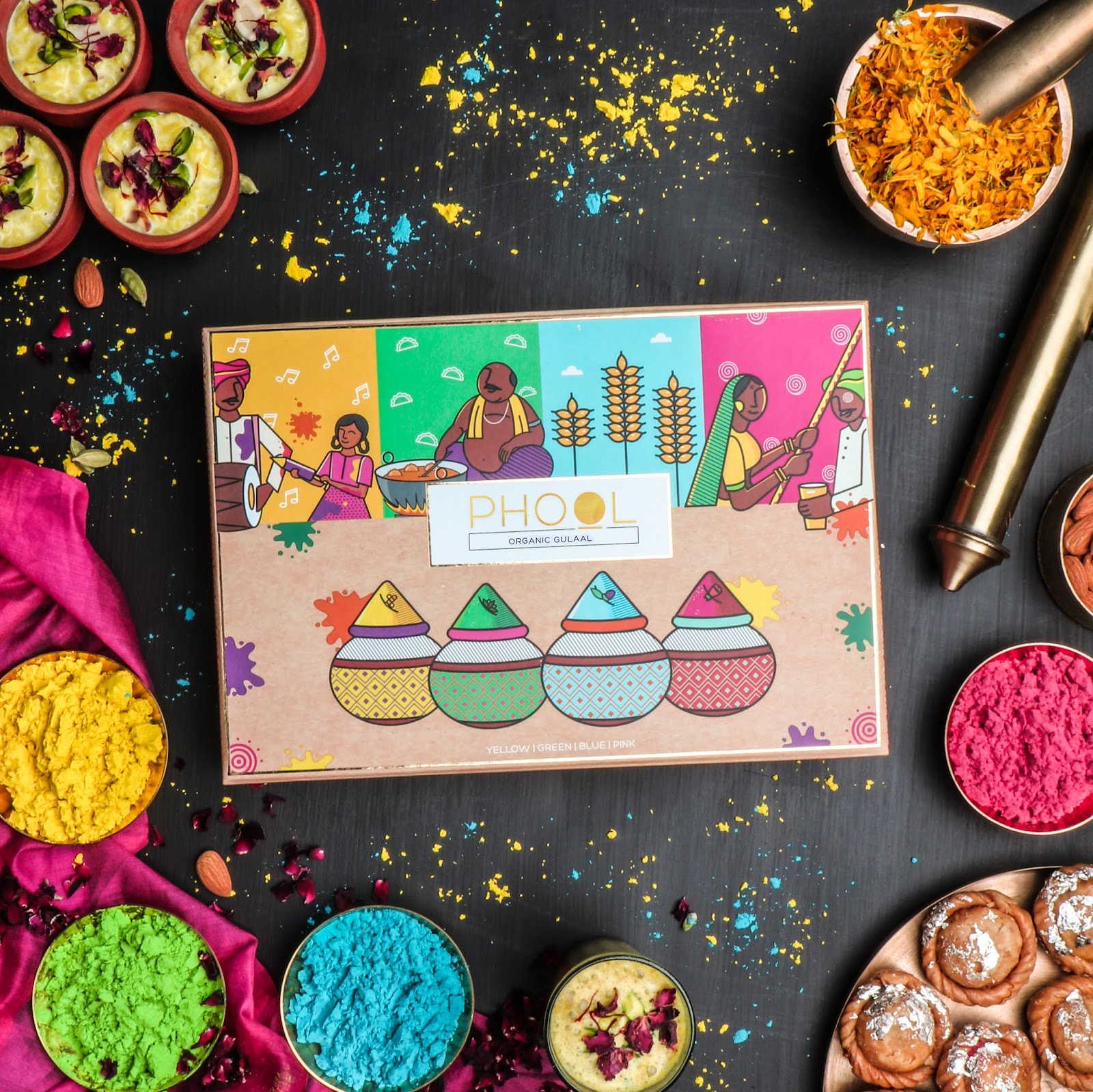 A contemporary graphic illustrative approach with bold lines and vibrants colours lends the box, the perfect amalgamation of traditional and quirky. It tells the story of Holi through visual imagery inspired by the nooks and corners of the Indian life. What gives the box a premium touch is the recycled cardboard with the gold foiling on top.

The inside panel of the box contains a small note about the history of making organic Gulaal and also a graphic representation of the ingredients for every colour. Each pouch has a distinct sticker where characters from the front panel illustrations have been placed on backgrounds representing the colours in the pouch. 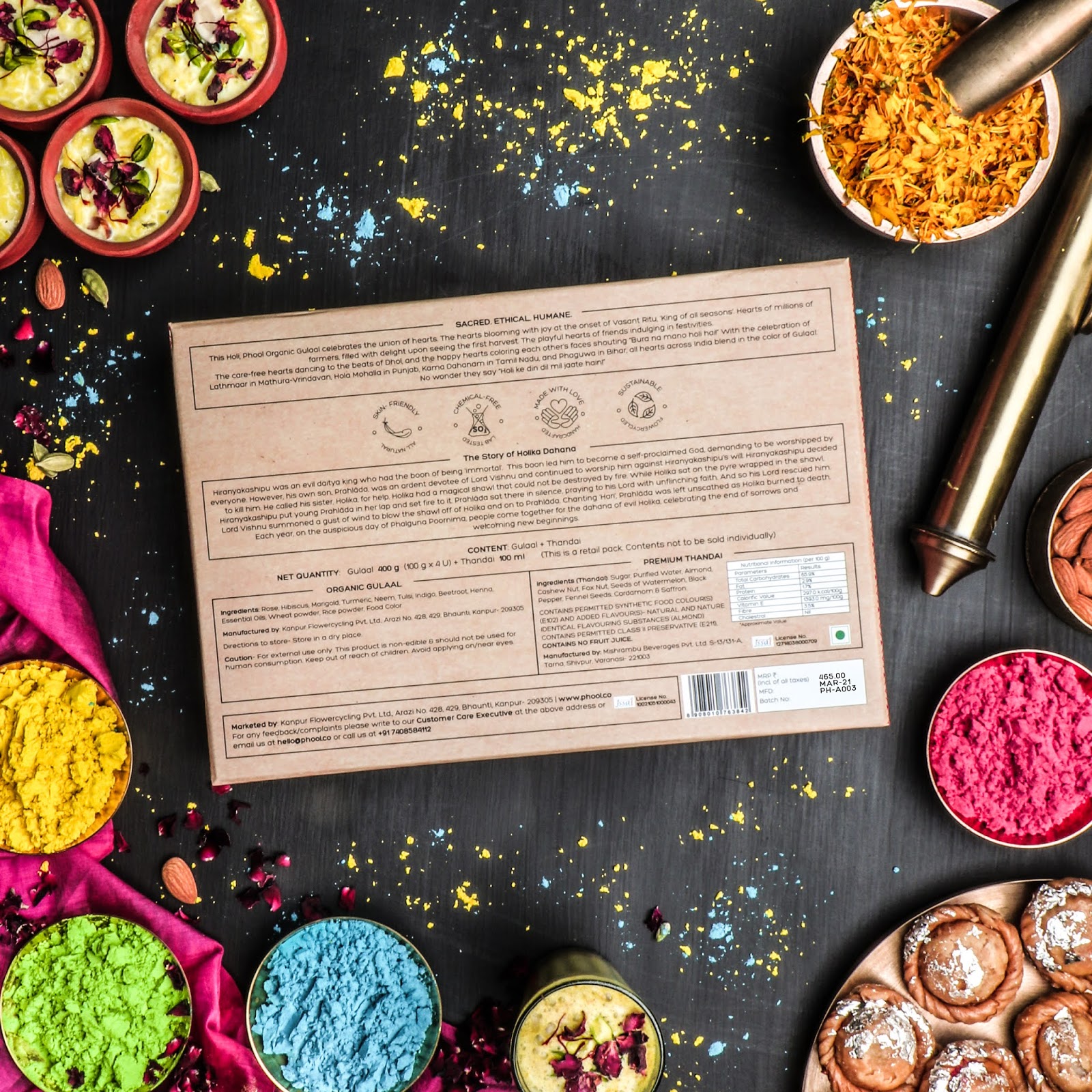 The Thandai bottle label design is a fun little illustration of a mortar and pestle with the rich traditional ingredients used to make the drink. The box also contains a Holi greeting card with an illustration of the woman who handcrafted the Gulaal and a message from her.

The combination of an asymmetric box top with patterned sides, out-of-the-box goodies inside the box, and the mythical tale of ‘Holika Dahana’ at the back makes for a wholesome gift for Holi. 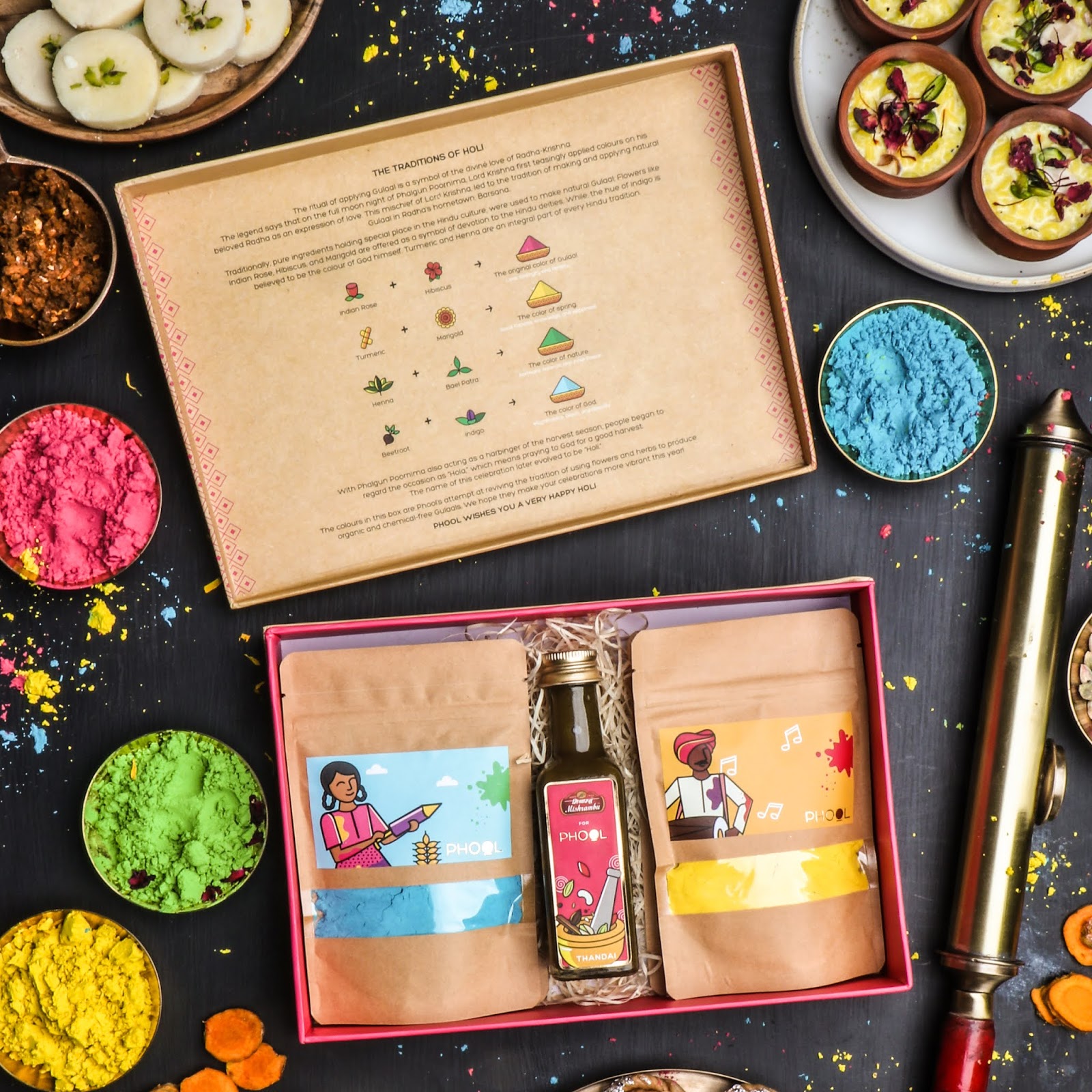