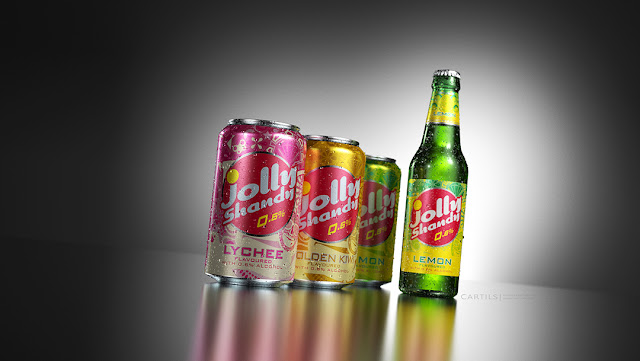 Carlsberg’s Hong Kong local power brand Jolly Shandy, is a CSD+, which is a unique position between CSD and RTD categories. In order to revitalise the brand CARTILS developed a new ground-breaking design for Jolly Shandy.

The objective was for Jolly Shandy to communicate the right taste cues that clearly reflects some alcohol percentage while appealing to the core target audience.

“The solution was a radical change in look and feel” commented Alfonso Granati, Brand Consultant responsible for the project. “We aimed to attract a very demanding target audience increasing the level of taste expectation while retaining a good amount of dynamism. The only brand equity we wanted to keep was the logo, a unique feature in charge of linking to the brand to its core. It was ‘key’ to also leverage good variant navigation through the use of special colours which could attract the consumers.”

The colours used for the flavours balance the innovative design while respecting the soft and smooth taste of the Shandy as a category. The Golden Kiwi and Lychee flavours were also developed. Another interesting aspect was the special attention that was dedicated to the development of a unique backround illustration to communicate the concept of polyhedrism through the idea of the “kaleidoscope”. The concept also led the idea of the “Extraordinary world of Jolly Shandy” also implemented in communication. The important part being the “fruit Character” CARTILS illustrated for the brand: the Lemon, Lychee, and Kiwi face which appear on the side of every product. They personify the funny, energetic and trendy image of the brand. These “faces” will be used as “brand signifiers” off pack and they could easily become a trend.

“Jolly Shandy is a very challenging project with the brand was under a huge pressure due to volume downtrend.   The brand is very unique in the market as it is the only well-known Shandy brand in Hong Kong.   Before the great project being done by Cartils, the old packaging was in black color in the concept to have trendy & stylish feeling. However, when the products go on the shelf, it becomes not good enough to attract attention and to induce impulse buying.   We decided to offer Cartils the job of the packaging revamp because their reputation in the industry as well as their professional attitude in the pitching process. We have set a few objectives for this project:

The project carries through very well. To be honest, the colours selected by Cartils really look very dynamics & outstanding on the shelf. After the launch of this new packaging, we recorded a very strong rebound of the sales with 30% up when compared the same period in last year. I am very pleased with the service provided by Cartils and hope to have chance to work with them in near future for other packaging projects.”

CARTILS and Carlsberg re-invented the concept of Shandy in Hong Kong. The results speak for themselves: not only is the new design fresher, more dynamic, has more impact, while clearly grabbing the attention of the appropriate target consumer, it has also increased its sales by 30% since the introduction of the new CARTILS redesign of Jolly Shandy.