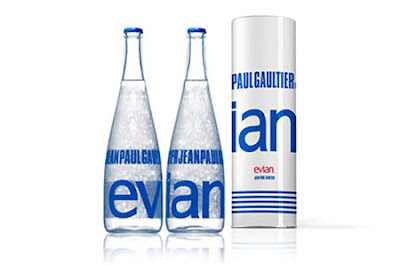 Thanks to Leah Minium for sending in information of this lovely Evian Bottle designed by Jean Paul Gaultier.

“Atlanta, GA – Fashion designers know that the key to a good collection combines the reinvention of ideas with underlying signature qualities and Evian® Natural Spring Water is keeping to these same ideals with the release of the newest addition to its designer collection. Remaining true to tradition, Evian has once again partnered with an internationally acclaimed French designer to produce two unique and exclusive creations for 2009, the Evian Prêt-à-Porter Bottle and the Evian Haute Couture Bottle by Jean Paul Gaultier.

The Evian Prêt-à-Porter, or ready-to-wear, Bottle by Jean Paul Gaultier possesses a style that is classic, yet modern all at once. Adorned with a pattern of interlocking snowflakes, the bottle recalls the crisp, icy mountain tops of the French Alps from which Evian Natural Spring Water is derived. Magnified by a unique color so much known to Gaultier, the majestic blue of the oversized logo and the understated print of the designer’s name offers a subtle reminder of a stylish mariner, a mariner that could so easily be found on the shores of Lake Geneva, which the town of Evian borders.” 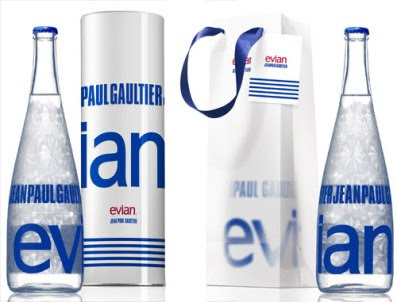