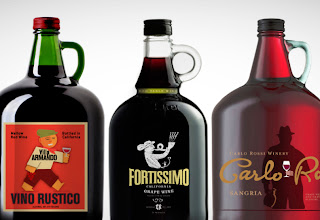 Back in the day, before the bag-in-box wine package, “sensibly priced wines” were most often found in 3 and 5 liter screw topped glass jugs. Jug wine was the staple of post-prohibition California wineries and the San Joaquin Valley became known as the “jug wine capital of the world”. Gallo, Inglenook, Franzia, Paul Masson, Almaden were a few of the most notable producers. At one point the in the mid-70’s Carlo Rossi was the number 2 selling table wine in the United States. Today, except for a handful of brands, the classic “finger-hook” wine jug has been replaced by the wine box and the tetra pak. Gallo’s Carlo Rossi brand continues to be sold in bulbous glass jugs. Villa Armando and CR Fortissimo green glass jugs have not changed significantly in years. The jug wine category has not been without innovation, Coppla Winery introduced The Carmine jug, Portalupis packages Vaso di Marina in a 1.89 liter glass milk jug and Three Thieves 2003 Zinfandel was packaged in a beautiful glass finger-hooked 1 liter jug.

As wine awareness and taste have changed so has the target consumer for jug wine, with a key demographic in the 20-30 age range. There is a certain retro/nostalgic aspect to the jug that a box of wine just won’t ever attain. We were curious, with a careful considered package redesign would some of the traditional jug brands perhaps find new consumers?