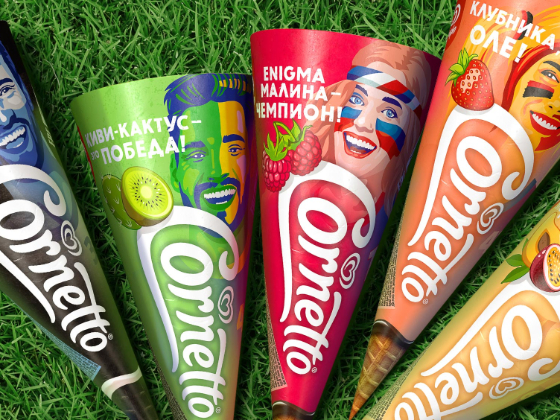 In preparation for the biggest event of summer 2018, Unilever had made the decision to launch a limited edition ice cream Cornetto. The main objective of the project was not to simply maintain the level of demand for the product but to increase it during the FIFA World Cup. Taking the wishes of the client into account, the Mildberry team developed the key idea for the product range and realised it in the package design. Just like football fans come from a variety of countries, each flavour of Cornetto ice cream has its distinct character and color. To keep this design intact with the idea of ‘fans of the game’, the main stage is covered by bright and emotional images of fans from around the world: from Russia and Germany to Brazil and Argentina.

Mildberry also created a special map of Moscow from ‘Inmarko’. The map was distributed for free through a variety of channels, such as traditional shops and parks. This map included both useful information about the city, such as public transport and info centres, and unusual facts about Moscow and its history. To give the tourists a truly unique experience of the capital, Mildberry worked out comfortable walking routes, which include the main attractions of Moscow, as well as spots where they can buy the ‘Inmarko’ ice cream and make their walk that more enjoyable.

Great and Golden
12 hours ago