HOUSTON (September 8, 2020) – While 2020 has brought about several curveballs, Karbach Brewing Co. is announcing something folks can look forward to this year. The Houston-based brewery has joined forces with renowned Texas chefs Chris Shepherd and Aaron Franklin to release Horseshoe Pilsner, a new beer benefiting Southern Smoke Foundation to support those in the food and beverage industry in need.

Horseshoe Pilsner (4.5% ABV) is a smooth, light-bodied beer made to be the perfect palate cleanser while enjoying legendary Texas barbecue. Originally brewed with inspiration from Aaron Franklin for his annual Hot Luck Festival, Karbach, Franklin, and Hot Luck organizers decided to add a donation element at the start of the pandemic, given the increased need for aid in the service industry.

“The way I try to cook Central Texas Barbecue is with a focus on good ingredients, clean flavors, and attention to detail… turns out, those things also make great beer! And, it just so happens that the beer I reach for on a summer afternoon is a clean crispy pilsner,” said Franklin. “Casually crossing paths with the Karbach fellas at backyard barbecues, at rock shows, and at Hot Luck laid the groundwork for Horseshoe Pilsner. Something that’s sessionable, refreshing, and complements the way we like to eat… I think we have a winner!”

Franklin and Shepherd have supported each other throughout the years through their yearly Hot Luck and Southern Smoke events. Aaron is the only chef/pitmaster to cook at the Southern Smoke Festival every year and donated $10,000 to the nonprofit’s Emergency Relief Fund. Chris and Aaron view this new beer as a perfect opportunity to provide further support to the service industry community.

“I’m so excited about this beer,” said Shepherd. “It represents such a special partnership that will do so much good for the people in our industry. Restaurant workers are hurting—possibly more than they were when the COVID-19 crisis began—and it means so much to me that Karbach, Aaron, and the folks at Hot Luck are supporting Southern Smoke.”

Giving back has been part of Karbach’s DNA since its founding in 2011, and this new beer release is an extension of the team’s long-standing commitment to local support. To date, Karbach has raised a combined total of more than $200,000 through their Love Street and Crawford Bock giveback initiatives, benefiting Southern Smoke and the Astros Foundation respectively. Karbach, Franklin, and Shepherd are hopeful that through Horseshoe Pilsner’s release, they’ll be able to raise upward of $100,000 for the foundation.

“For Houston and for the country as a whole, service industry workers are the backbone of our communities. At Karbach, our staff is like an extended family and our brewery simply would not survive without them,” said David Graham, Marketing Manager at Karbach Brewing Co. “It’s been incredible to work with two Texas legends like Aaron and Chris, and we are proud to be able to support Southern Smoke through our new Horseshoe Pilsner release.”

Karbach’s creative agency, Guerilla Suit, handled the concept and design for Horseshoe Pilsner. The beer is available now in six-packs at grocery and liquor outlets across Texas, as well as on draft at select restaurants, bars and pubs. 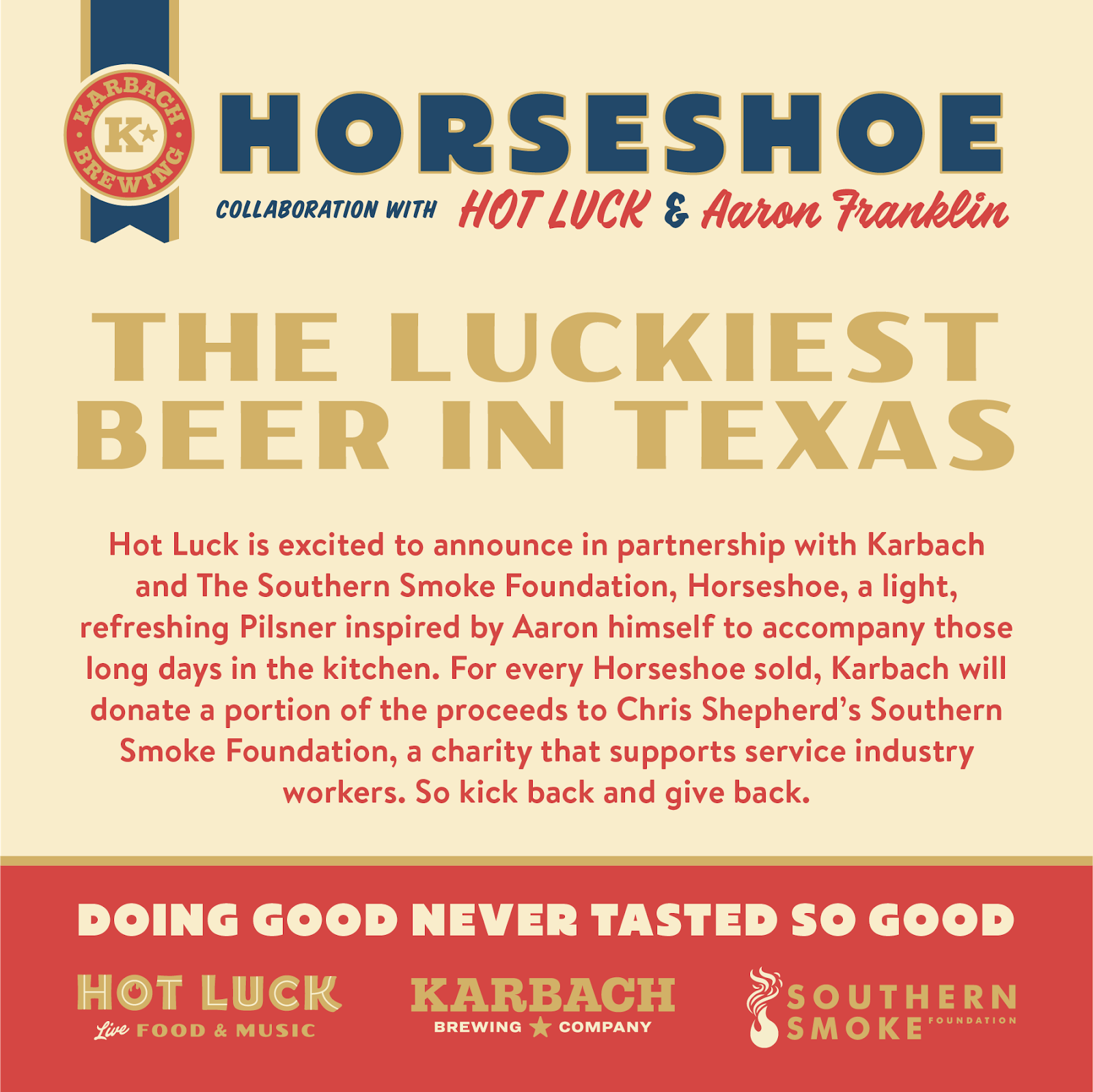