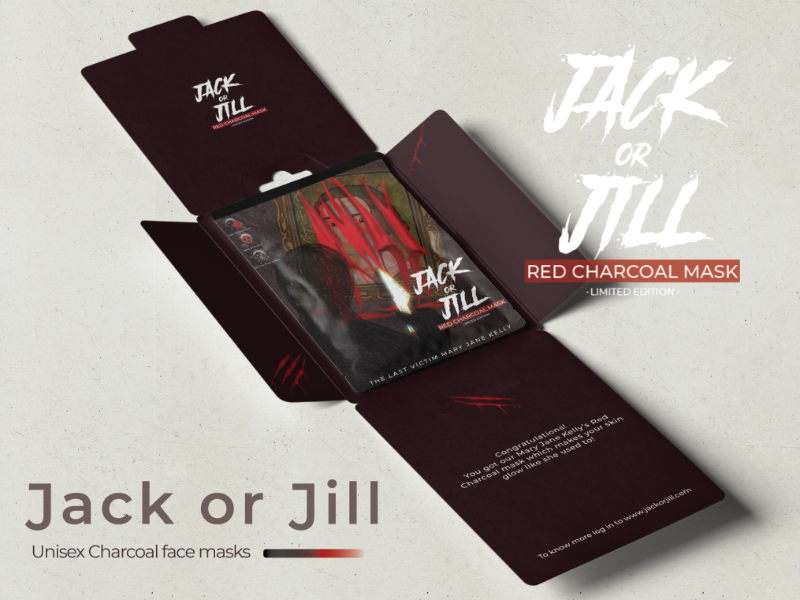 Jack the Ripper was an unidentified serial killer, active in and around the district of London in 1888. The name “Jack the Ripper” originated in a letter written by an individual claiming to be the murderer. It is still suspected that the killer could have been a woman, “Jill, the ripper”.

The masks “Jack or Jill” are fictional merchandise of this murder mystery. The project’s aim was to portray a narrative on the packaging of a chosen product that is related to the same.

Primary packaging is a surprise pack with 5 different types of masks that are named after the victims of ‘jack the ripper’. The story on the packet is – “Five victims – Mary Ann Nicholas, Annie Chapman, Elizabeth Stride, Catherine Eddowes, and Mary Jane Kelly – are known as the ”canonical five” and their murders between 31 august and 9 November 1888 are often considered the most likely to be linked. The murders were never solved, and the legends surrounding these crimes became a combination of historical research, folklore, and pseudohistory.” On the front of this pack, on the left side, there are empty frames with the names of those victims. You get one of the 5 victims – or the flavor in one packet, which also has a little description of their murder.

The back has information about all the kinds of masks available within the merchandise along with this story – “Jack the ripper was an unidentified serial killer active in the largely impoverished areas in and around the Whitechapel district of London in 1888. In both the criminal case files and contemporary journalistic accounts, the killer was called Whitechapel Murderer and Leather Apron. It was also suspected that the killed could be a female which led to naming the tale ‘Jill, the ripper’. Attacks ascribed to Jack or Jill Typically involved female prostitutes who lives and worked in the slums of the East End of London. Their throats were cut prior to abdominal mutilations. The removal of internal organs from their killer had some anatomical or surgical knowledge. To this date, the killer hasn’t been found. Secondary packaging is the big reveal of the kind of mask you get – The last victim ‘Mary Jane Kelly’ with the type ‘red charcoal mask’. The front has an illustration which is after the story about Jack ripping Mary’s face off.

The back has the story of how Mary was murdered and a little description about the product – Red charcoal mask. The story is – “Unlike the other four canonical ripper victims – Each of whom had been murdered outdoors and whose mutilations could have been committed within minutes – Kelly was murdered within the sparsely furnished single room she renders at 13 Miller’s court, affording her murderer an extensive period of time to eviscerate and mutilate her body. Kelly’s body was by far the most extensively mutilated of the canonical victims, with her mutilations taking her murderer approximately two hours to perform”

What’s Unique?
Masks as a product are inspired by the stories of Attacks ascribed to Jack the Ripper typically involving females and ripping their skin off. The packaging is also based and illustrated on this story. Since the story went with it being either a man or a woman as the murderer, I thought of giving it a fun suspense packaging of receiving any one of the 5 victims or flavors.