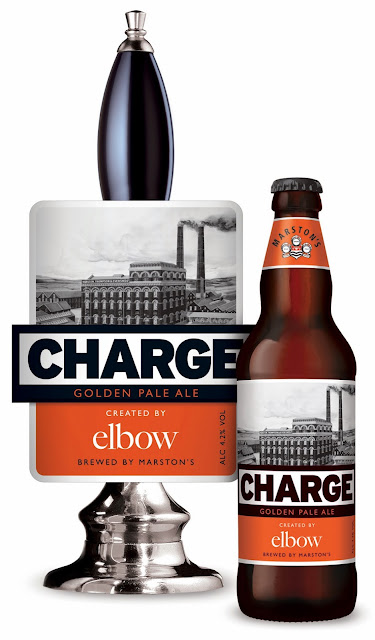 Butcher & Gundersen have developed the branding and packaging design for a new beer created by British band elbow in collaboration with Marston’s Brewery. This Golden Pale Ale session beer, branded ‘Charge’, is named after one of the tracks of the band’s newly released album ‘The Take Off and Landing of Everything’.

Briefed to echo the theme of the ‘Charge’ track – about an older guy in a bar full of younger people, reflecting on how his generation has paved the way for the younger generation – the design combines the heritage of the Marston’s Brewery, the spiritual home of British Brewing, through traditional black and white illustration, with the simple orange and black colours, and strong sans serif type to bring it into the modern day. The design has been executed across the beer label, pump clip, drip mat and bar runner as well as launch literature, website and trade adverts.

Tom Lenihan, Marston’s Brand Manager adds “We are excited by the collaboration with elbow, they have a genuine passion for beer and we see it as a great way of reaching a different audience for our beers and the category as a whole.”